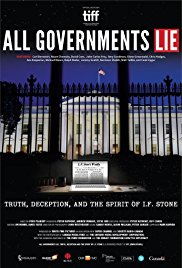 FAIR has kept fundraising at bay with only occasional pleas for help this year. Now the bank account is low and showing serious signs of stress. So FAIR is now officially launching its year-end fundraising campaign with a much-needed $50,000 goal.

It’s been a tough year of beating back supposed “news” that distracts from the concrete concerns in our lives. With healthcare and Social Security under attack, EPA rules purged, voting rights eliminated, these real news stories, and more, need telling. FAIR breaks it down in our newsletter Extra!, our online articles and our weekly radio show CounterSpin.

To encourage your donations, FAIR is offering this gift of rational and progressive thinking that we hope you will share with family and friends. Those who give $35 or more, we will thank with the 91-minute documentary film, All Governments Lie: Truth, Deception and the Spirit of I.F. Stone.

Follow independent journalists and critics Amy Goodman, Glenn Greenwald, Michael Moore, Noam Chomsky and many more as they expose government and corporate deception—just as rebel journalist I.F. Stone did from 1953 to 1971 with his four-page newsletter I.F. Stone’s Weekly.

All Governments Lie reveals the profound influence Stone has had on contemporary independent journalists like Jeremy Scahill, Matt Taibbi and others. One of the executive producers is FAIR’s founder Jeff Cohen, who also appears in the film.

Our year-end drive is the most important fundraising we do all year, the one that makes or breaks FAIR’s ability to keep doing the research and analysis our media activists expect from us.

After 31 years, our readers, listeners and activists know the reality of keeping a small progressive nonprofit going. We depend on FAIR’s network of media activists to stand up to help assure a future of a free and independent press.

FAIR is a 501(c)(3) nonprofit organization and your donation is tax-deductible. Each and every donation is appreciated.