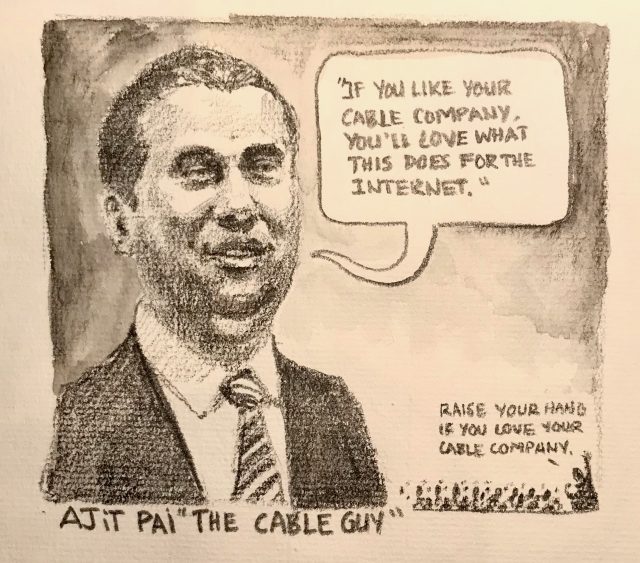 It’s Saturday morning at a café near the museum in Winlock, Washington, and Michelle Conrow is eating brunch while surfing the internet on her laptop. What might seem a banal activity for many is a luxury for Michelle. The internet at her house just outside the town is primitive by today’s standards, with speeds similar to the dial-up days of the 1990s. It took three days to download Microsoft Office to her new computer.

Many of the 1,300 residents in this rural area, which was once the US’s second largest egg producer, report frustratingly slow connections. There’s no binging on the latest must-watch Netflix show or streaming music on Spotify to suit your mood. No quick downloading of a podcast for your journey to work as you grab your coat. No running several devices simultaneously as parents catch up with internet banking or shopping on Amazon while their children chat on social media and watch YouTube videos.

Some have no broadband at all because the only provider, CenturyLink, has maxed out its system and there is a waiting list to get a connection, while others live outside the service area. Conrow and others have been complaining about the service for years. And if the internet’s top regulator, the Federal Communications Commission (FCC), gets its way, Conrow worries things may never get better.

In 2015, under Obama, the FCC passed the open internet order, which treated the regulation of broadband as a utility, similar to electricity or water, something seen as essential to modern life. Among other rules companies were officially banned from offering tiered services – fast and slow lanes for different service in an attempt to preserve “net neutrality” – the principle that all traffic online should be treated equally. An ombudsman was established to police complaints about net neutrality.

With the FCC now under Republican control those plans are now on the chopping block. The regulator has outlined its plans to scrap the open internet rules and will vote to implement its plans in December. …

(Commoner Call illustration by Seth L. Taylor, 2017. Open source and free to use with link to www.thecommonercall.org )

‘Worse Than One Could Imagine’: Commissioner Decries FCC Chair’s Attack On Net Neutrality

In an effort to combat the “mountain of lies” FCC chair Ajit Pai has deployed to justify his newly released plan to kill net neutrality, Democratic FCC commissioner Mignon Clyburn unveiled a fact sheet (pdf) on Wednesday aimed at helping Americans understand that Pai’s proposals are “worse than one could imagine” and highlighting their life-or-death implications for the open internet.

The fact sheet, an easily digestible two pages in length, runs through a series of commonly asked and frequently confusing questions surrounding net neutrality: what it is, why it’s important, and how Pai’s plan would affect the web.

At the most basic level, net neutrality is the principle that “all data and all legal traffic that travels over the internet should be treated equally,” Clyburn writes. “This has been a bipartisan bedrock principle for more than a decade.”

It is also extremely popular among the public. As Common Dreams reported in September, 57 percent of Americans “support the current net neutrality regulations that ban ISPs from blocking or discriminating against lawful content on the internet.”

But Pai showed little concern for public opinion in announcing the release of his plan on Tuesday, neglecting even to mention the record-breaking number of public comments that poured in against his proposals.

Clyburn’s report goes on to ask whether it’s true that Pai’s plan would really do away with net neutrality, despite the expressed will of the public.

“Yes,” Clyburn answers. “It eliminates all prohibitions against blocking and throttling (slowing down) applications by broadband providers, and enables them to engage in paid prioritization and unreasonable discrimination at the point of interconnection. It ignores thousands of consumer complaints and millions of individual comments that ask the FCC to save net neutrality and uphold the principles that all traffic should be created equal.”

As for the specifics, Clyburn notes that Pai’s plan:

The fact sheet closes with a glossary compiled to help American consumers to “decipher the jargon” Pai and his corporate backers use in advocating what critics have described as just “another handout to big business at the expense of consumers.”

When Pai invokes phrases like “heavy-handed regulation,” for instance, he is really referring to “limited rules to protect consumers and competition that broadband providers do not like,” Clyburn notes.

Likewise, Pai’s description of current regulations as “unnecessary and likely to inhibit innovation and competition” should be translated to “not financially beneficial to broadband providers.”

Clyburn’s fact sheet comes as internet defenders are urging a mass revolt against the FCC chair’s proposals, which are scheduled for a vote on December 14.

In a blog post on Wednesday, Mary Alice Crim, engagement and events director for the advocacy group Free Press, outlined seven steps Americans can take “right now to save the internet,” including calling members of Congress and signing up to volunteer with Team Internet, a network that helps “coordinate Internet users from across the nation to pressure Congress locally.”

“Our message to Pai and companies like AT&T, Comcast, and Verizon is clear,” Crim concludes: “People everywhere will not sit idly by as you destroy the free and open internet.”