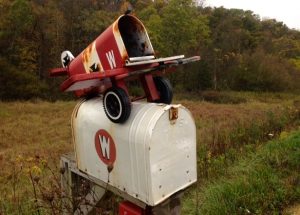 Letter to the Editor:

Your most recent cartoon ]11/13] regarding how taxes fund war and devastation is actually totally missing the chain of events as to the funding of war [Your Tax Money At Work: U.S.-Armed Saudi Arabia Total Blockade On Yemen Is “Death Sentence” For Innocents]. 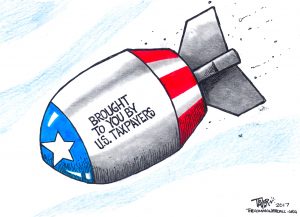 David Graeber (of Occupy Wall Street and professor of Anthropology) in his book Debt: The First 5000 Years points to the feudal structure of authoritarian monetary issuance that precedes taxation and is spent on the military.  The peasantry, who do not want the military or the wars, must pay their taxes in the form of the currency issuance, but to obtain that currency they must do business with the very military they do not actually support.

Your cartoon is actually backwards as to the structural means by which militarism is imposed on a populace.  And none of your moral indignation changes that structure.  May I politely suggest to you and The Commoner readers that no change in the militaristic propensity of this country can come about so long as the very system of money remains essentially the same as in feudal times. We are simply in a neo-feudal epoch with different technologies but the same ideologies and the same basic definitions and structures of the thing called money.  It would do all humankind a better service to challenge the structures of rather than the effects of the systems we are using.  No one ever had any success challenging the behavior of slave masters.  It was not until the very institution of slavery itself was challenged that things changed.  Similarly, no change will come about whining as to the behavior of those who have implemented this system of authoritarian issued money.  It will be more reasonable to challenge the structure and the legitimacy of the system itself.

One can consult the writings of Graeber and many others to see how long this kind of system has been imposed.  One can look to this paper  by UMKC professor Forstater about the imposition of colonial money with the intent to destroy local self reliance and local self sufficiency.  http://cas2.umkc.edu/econ/economics/faculty/Forstater/papers/Forstater2005/RiPE%20Forstater.pdf
The late esteemed British economist, Richard Douthwaite, describes this same problem like this:

“Currencies produced by one group for use by another have been instruments of exploitation and control.  For example, whenever Britain, France, or one of the other colonial powers took over a territory during the “scramble for Africa” towards the end of the (eighteenth) century, one of the first actions was to introduce a tax on every household that had to be paid in a currency that the conquerors had developed for the purpose.  The only way Africans could get the money to pay the tax was to work for their new rulers or supply them with crops.  In other words, the tax destroyed local self-reliance, exactly as it was supposed to do . . . Very little has changed.  Over 95 percent of the money supply in an industrial country is created by banks lending it into existence.  These banks are usually owned outside of our areas, with the result that we have to supply goods and services to outsiders even to earn the account entries we need to trade among ourselves.  Our district’s self-reliance has been destroyed just as effectively as it was in Africa, and whatever local economy we’ve been able to keep going is always at the mercy of events elsewhere, as the current world economic crisis is making too clear.”

Please, look at the situations that you wish to remedy on a much deeper structural level.  Because much of the criticism that is offered really is only calling out the effects and not structures that cause them.

(Editor’s Reply: The reasons and causes for the propensity of national militarism are many and can indeed be found in the monetary system and banking, and at the same time one must look much more broadly beyond a single poisoned well to include moral teachings, educational and religious institutions, racism, psychology, propaganda and spirituality and mass media. The issue of war is a complex jig saw puzzle of many interrelated pieces with no single piece predominating.  The Commoner Call will always cast the net widely to address issues of war from a more holistic point of view. – Mark L. Taylor)