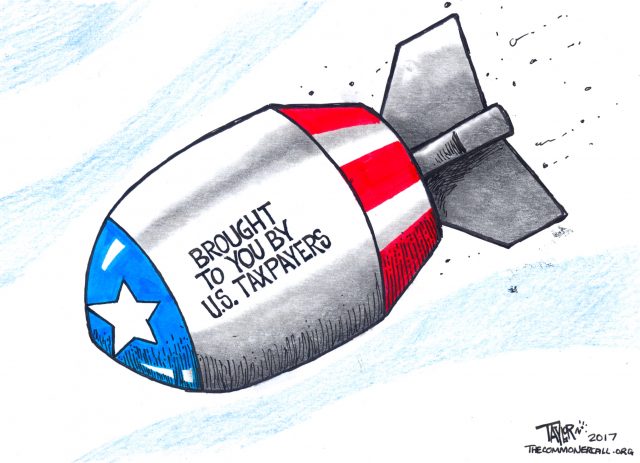 I Just Don’t Get it… Why Do They Hate Us?

United Nations officials say Yemen will face the world’s largest famine in decades if the Saudi-led coalition refuses to lift its blockade on deliveries of aid. On Monday, the coalition shut air, land and sea routes into Yemen after Houthi rebels fired a missile that was intercepted near the Saudi capital, Riyadh. Saudi Arabia says its blockade is needed to stop Iran from sending weapons to the rebels. The U.N. says aid agencies were given no prior notice of the Saudi decision to shut down all land, air and seaports in Yemen. Meanwhile, medical experts warn the clampdown will worsen Yemen’s cholera epidemic, which has sickened more than 900,000 people. We are joined by Afrah Nasser, an independent Yemeni journalist who is the founder and editor-in-chief of the Sana’a Review. Facing death threats, she is in exile from Yemen but continues to report on human rights violations, women’s issues and press freedom there. She is here in the U.S. to receive the International Free Press Award from the Committee to Protect Journalists.

Accomplices To War Crimes: Millions On Brink Of Death In Yemen, But Members Of Congress Can’t Be Bothered With Questions

Despite warnings about the intensifying humanitarian crisis in war-ravaged Yemen, members of the U.S. Congress dodged questions from an Intercept reporter this week about why lawmakers haven’t voted on U.S. support for the Saudi-led military coalition that is bombing the impoverished country while also imposing a blockade of urgently needed aid.

Lee Fang, a journalist with The Intercept, partnered with NowThis to a produce a video that shows him attempting to question members of Congress on Capitol Hill as part of a reportpublished earlier this week about U.S. support for the war in Yemen and the 2001 Authorization of Use of Military Force (AUMF) that passed Congress after the 9/11 terrorist attacks, and which U.S. President Donald Trump and his predecessors have used to justify military actions around the globe without explicit permission from lawmakers.

As Fang notes in his related article, while the coalition battles Houthi rebels, “Saudi Arabia relies heavily on the U.S. military for intelligence sharing, refueling flights for coalition warplanes, and the transfer of American-made cluster bombs, rockets, and other munitions used against targets in Yemen”—which continues in spite of the fact that “coalition warplanes have repeatedly struck crowded markets, hospitals, power plants, and other civilian targets.”

“Congress, however, has never authorized U.S. support for the war, which has caused 10,000 civilian deaths and has spiraled in recent months into one of the worst humanitarian crises of the century…. For 16 years, the executive branch has pointed to the AUMF as legal justification for its involvement in conflicts across the Middle East and Africa, a strategy that is legally questionable. But the use of the AUMF in the Yemeni context is especially bizarre given that the AUMF’s target is Al Qaeda, and the group AQAP—Al Qaeda in the Arabian Peninsula—is fighting alongside the U.S.-Saudi coalition against the Houthi rebels.”

Although several members of Congress brushed off Fang’s questions, some expressed frustration with the AUMF, and pointed to a recent bipartisan legislative effort to terminate U.S. involvement, which was quashed by lawmakers who support the Saudi-led coalition.

Meanwhile, about 20 humanitarian agencies and the U.N. are warning of a “nightmare scenario,” as Common Dreams reported Wednesday, after the Saudi-led coalition closed all air, land, and sea ports to the country, cutting off millions of civilians from life-saving aid.

“There are over 20 million people in need of humanitarian assistance; seven million of them, are facing famine-like conditions and rely completely on food aid to survive,” according to the agencies.

“It will not be like the famine that we saw in South Sudan earlier in the year, where tens of thousands of people were affected. It will not be like the famine which cost 250,000 people their lives in Somalia in 2011,” warned Mark Lowcock, U.N. undersecretary-general for humanitarian affairs and emergency relief coordinator, speaking to reporters at the United Nations headquarters in New York. “It will be the largest famine the world has seen for many decades, with millions of victims.”

Lowcock, who visited Yemen last month, noted that “humanitarian access through the ports was inadequate even before” the blockade was announced, and said the U.N.’s World Food Programme feeds about seven million Yemenis per month. In addition to the millions who are starving, Yemen is also facing a cholera epidemic that has killed hundreds of thousands of people.

Saudi authorities arrested scores of prominent officials over the weekend, including 10 princes, four ministers and dozens of former ministers, in a massive shakeup by King Salman aimed at consolidating power for his son, Crown Prince Mohammad bin Salman, the main architect of the kingdom’s war in Yemen. Among those arrested was Prince Alwaleed bin Talal, one of the world’s richest people, with an estimated net worth of at least $17 billion. Talal has investments in many well-known U.S. companies, like Apple, Twitter, Citigroup—and Rupert Murdoch’s media empire, News Corp.

The arrests, on unspecified “corruption” charges, came just hours after the crown prince convened a new anti-corruption committee with wide-ranging powers to detain and arrest anyone accused and to search their homes and seize their assets. Meanwhile, the White House said President Trump called King Salman to offer thanks for the kingdom’s purchases of billions of dollars in U.S. weaponry, while praising what it called the kingdom’s “modernization drive.” We speak with Toby Jones, associate professor of history and director of the Center for Middle Eastern Studies at Rutgers University, and with Afrah Nasser, Yemeni journalist and founder and editor-in-chief of the Sana’a Review.