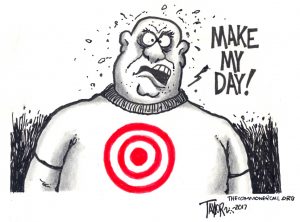 When the rest of the world looks at America’s gun problem, it’s often with bafflement.

Sunday with Lubach, which is sort of like the Dutch version of Last Week Tonight with John Oliver, looked at guns — specifically, the US’s love of firearms. And it’s very telling.

For one, the satirical Dutch video describes America’s love of guns as so bad that it is an illness: Nonsensical Rifle Addiction, or NRA — a reference to the biggest gun lobby group in the country.

From the outside, it’s just baffling.

“Dear fellow Europeans,” the video’s narrator begins, “a devastating humanitarian crisis is threatening a small country on the coast of North America: the United States of America.”

The video goes on to list some of the statistics related to America’s gun homicides and accidents from Gun Violence Archive: 24,000 injuries and 11,000 deaths so far this year, culminating to roughly 40 deaths a day. The video pins this on “a terrible epidemic.”

“NRA is a constitutional disorder caused by a dysfunction of the prefrontal Second Amendment in the nonsensical cortex, causing patients to shoot people,” the narrator explains. “It starts with an innocent Colt, but soon patients will show signs of shotguns, sniper rifles, and M16s even. Often, patients use silencers to hide their condition.”

The video goes on like this, showing pictures that you’d expect to see in a typical humanitarian crisis PSA about a major disease halfway across the world — black and white images, sad people, children suffering, and so on. …