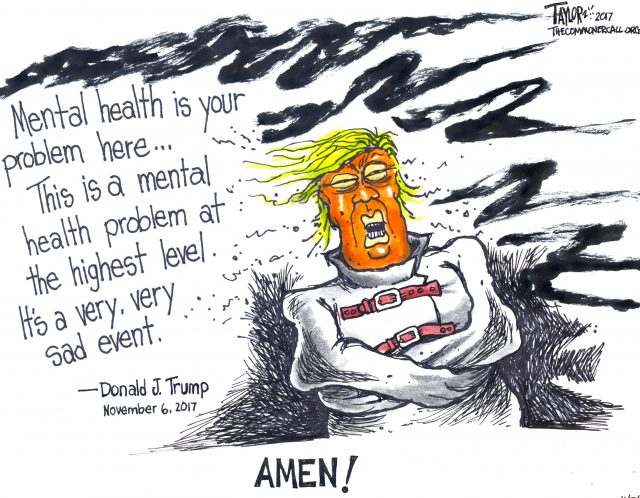 I am not the first person to point this out: There’s been a cultish quality to President Trump’s most ardent supporters. He seemed to acknowledge the phenomenon when he boasted that he could “stand in the middle of Fifth Avenue and shoot somebody” and not lose voters.

Throughout the campaign, and in personal appearances since then, Trump has harnessed the kind of emotional intensity from his base that is more typical of a religious revival meeting than a political rally, complete with ritualized communal chants (“Lock her up!”).

As we approach the one-year anniversary of Trump’s election victory, the zeal of some of his followers seems increasingly akin to a full-fledged cult.

If Trump’s presidency deteriorates further, expect the religious fervor of many of his followers to reach a fever pitch. That poses a risk for the country. Because the only thing more dangerous than a cult leader is a cult leader facing martyrdom.

I use the word “cult” in its pejorative sense, meaning a deeply insular social group bound together by extreme devotion to a charismatic leader. Such groups tend to exhibit a few common characteristics.

They are usually formed around an individual whom they’ve elevated to prophetic and near divine status.

During the campaign, Franklin Graham,Trump’s most enthusiastic evangelical Christian supporter, dismissed his many moral failings by comparing him favorably to the flawed patriarchs and prophets of the Bible: Abraham, Moses and David.

Robert Jeffress, pastor of the First Baptist Church in Dallas, told a talk radio audience that Trump was a better presidential candidate than someone who “embodies the teaching of Jesus” because Trump fit the biblical preference for a “strongman” in government.

Frank Amedia, an Ohio pastor who briefly had ties to the Trump campaign, explicitly cast the president as a prophet receiving divine revelations: “I believe he receives downloads that now he’s beginning to understand come from God,” he said in July.

The authority that a cult leader exercises comes from his self-ascribed role as the one true information source for his followers. Competing ideas and facts are not just wrong; they are demonic. …

(Commoner Call cartoon by Mark L. taylor, 2017. Open source and free to use with link to www.thecommonercall.org )