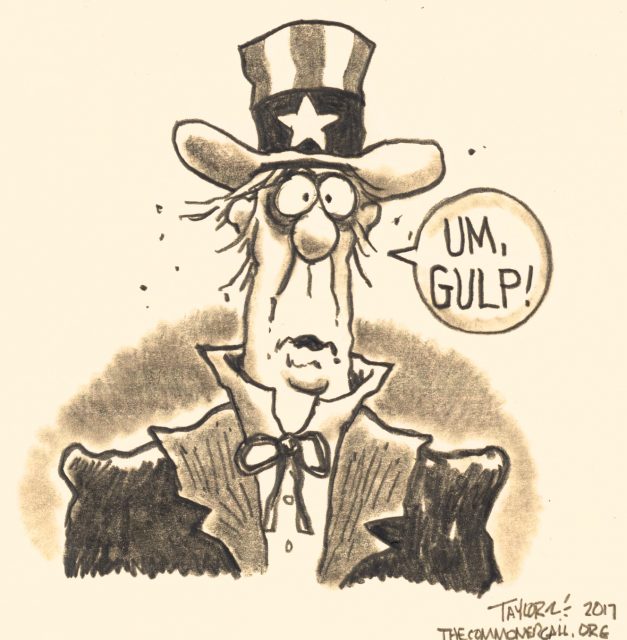 (Editor’s Note: If you know of anyone even peripherally impacted by the deaths and woundings in the Texas church shooting forward this article to them. This information needs to get into that community and the impacted families. – Mark L. Taylor)

The devastation wrought by all-too-regular mass shootings leads to immediate and predictable calls for “thoughts and prayers” for the victims. But what about compensation for the harm suffered? Unfortunately, that is one area in which U.S. law is inadequate, often preventing any kind of redress for the victims.

But that’s not so in the recent case out of Texas. The federal government could be—and should be—on the hook for personal injury and wrongful death damages. The Air Force’s unexplained and appalling failure to enter the shooter’s domestic-violence conviction into a national database that would have prevented him from obtaining a firearm is actionable.

Better yet, Congress should straightforwardly acknowledge the government’s fault here and pass specific legislation entitling the victims to compensation outside of the judicial process, along the lines of the September 11 Victim Compensation Fund.

In most cases of death-by-firearms, victims have no practical redress. The shooter, who’s the most obviously culpable actor, is usually either dead or broke. Depending on the facts of a given case, there might be a claim against those who manufactured or sold the weapon used in the killing, but victims would have a better chance against the seller of an ax than against a gun seller. That’s because of the Protection of Legal Commerce in Arms Act , a federal law that, with a few exceptions, rules out claims against those who sell guns and ammunition. So, there’s virtually no accountability anywhere in the system, and victims are left to whatever insurance they might have and to local crime compensation funds, which are typically limited in the amount of money recoverable. Sometimes, there’s also a private, charitable fund for victims of high-profile shootings, most recently including the Las Vegas massacre.

This case, however, is different. Victims—the injured survivors and the family members of those killed—may have a claim against the U.S. government for what seems like the plain negligence, or worse, of whoever failed to enter Texas shooter Devin Patrick Kelley’s name into the federal crime database—a listing that would have made him ineligible to buy a gun. The PLCAA doesn’t protect the government, since it applies to only gun and ammo sellers. So we’re left with the Air Force’s carelessness, which led to the murderer’s ability to purchase and use a weapon he had no right to possess.

Admittedly, it’s hard to sue the government because of the doctrine of sovereign immunity, which establishes that the government can’t be sued for the consequences of its actions. But the Federal Torts Claims Act creates a huge exception to this general rule. While the government can’t be sued for discretionary, policy decisions, the FTCA waives sovereign immunity to allow injured parties to sue for garden-variety negligence—like the careless driving of a government worker that causes an auto accident, or, as here, someone’s heedless failure to take a simple, ministerial step that the law required. This is just the kind of case that the FTCA was designed to cover. …

The National Instant Criminal Background Check System, also known as NICS, is intended to identify people prohibited under federal law from purchasing firearms from a licensed dealer. However, there are many loopholes in the system.

Devin Patrick Kelley shouldn’t have been able to buy the gun he used to kill 26 people and wound at least 20 others at a Texas church on Sunday.

The U.S. Air Force, of which Kelley was a member for four years before receiving a bad-conduct discharge in 2014 for assaulting his wife and infant stepson, admitted as much on Monday. The military branch acknowledged it failed to report Kelley’s domestic violence conviction to a federal database used for background checks on gun sales.

This glaring breakdown allowed Kelley to pass multiple background checks and purchase firearms ― even though, under federal law, he couldn’t legally own them.

Now, four days after the deadliest mass shooting in modern Texas history, it remains unclear exactly how Kelley fell through the cracks.

Requests for comment from the Air Force, Department of Defense, FBI and Department of Justice failed to provide much clarity about whether the military is routinely submitting domestic violence records to the background check system, as they are required to do under federal law.

As a result, it’s unclear whether Kelley’s case was an anomaly, or if there are potentially hundreds or thousands of other convicted domestic abusers whose records were not entered into the background check system by the military.

The responses HuffPost received ― or did not receive ― as well as a review of military procedural documents, lay bare a lack of cohesion in protocol across federal agencies and a bureaucracy that may be preventing the federal background check system, known as the National Instant Background Check System, or NICS, from performing effectively. …

Scott Ostrem, a 47-year-old, white man, walked into a Walmart north of Denver on Nov. 1 and opened fire. Eyewitnesses described him as “nonchalantly” shooting shoppers with a handgun, killing three.

Police captured Ostrem alive the next day. They said they had “no possible motive for the shooting other than to say there was nothing to suggest it was related to terrorism.”

The incident meets the FBI definition of a mass killing: Three or more people who died in a public place. But sandwiched between a Halloween day attack that killed eight in Manhattan and the slaughter of 26 people at a church in Sutherland Springs, Texas, the Walmart killings have faded into the background.

Ostrem killed three Hispanic people, Pam Marques, Victor Vasquez, and Carlos Moreno, all parents. In the apartment complex where Ostrem lived, neighbors described him as “a bizarre, angry man who lived alone in an apartment with a stack of Bibles and virtually no furniture.” He was a “loner who would walk around carrying weapons” like a shotgun or bow and arrows.

The local CBS affiliate reported Ostrem “often expressed dislike for Hispanics to their faces.” A Hispanic employee at the building said, “If he saw a Hispanic person, he would tell them to get out of his way.” One neighbor said Ostrem would say, “’This is America. You shouldn’t be here.”

That sentiment could have come right out of Donald Trump’s mouth.

Is there any doubt how Trump would have reacted if a Muslim carried around weapons, kept a stack of Korans in his apartment, verbally abused Christians, and then killed three people? Trump would have lit up Twitter, calling for “much tougher Extreme Vetting Procedures,” decrying Democrats who let the “terrorist” slip across our borders, and condemning the “truly evil” people coming in because of broken immigration policies.

Compare this to the Manhattan attack. Two hours after it happened, before the name of the perpetrator was released, officials designated it an act of terrorism. That assessment was apparently based on nothing more than the suspect, Sayfullo Saipov, yelling “God is great” in Arabic after he mowed down cyclists and pedestrians with a truck. Gov. Andrew Cuomo called Saipov one of “these lone wolves who commit an act of terror,” linking him to ISIS. A day later, Saipov was hit with federal terrorism charges.

What officials said of Saipov — a lone wolf “consumed by hate and a twisted ideology” — applies as much to Scott Ostrem and the other white supremacists who have murdered at least nine people since Trump was elected.

The killers attack the same people Trump demonized during his campaign — Muslims, Blacks, Hispanics, immigrants — and they are motivated by Trump’s words and ideology.

In February, U.S. Navy vet Adam Purinton confronted two Indian men in a bar in Kansas, asking if they were in the country legally, and yelled “Get out of my country,”before killing Srinivas Kuchibhotla and wounding two others. Purinton believed he had shot Iranians, another community scapegoated by Trump.

In May, Sean Urbanski, who liked “memes about Donald Trump, white supremacy, and the alt-right,” stabbed to death Richard Collins III, a black second lieutenant in the U.S. Army. …