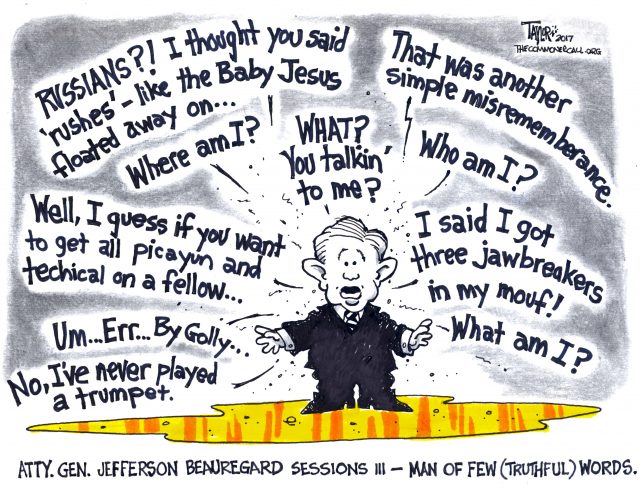 Attorney General Jeff Sessions reportedly now admits that he was aware of George Papadopoulos’s efforts to arrange meetings between the Trump campaign and Russia — a seemingly direct contradiction of sworn testimony he gave to the Senate.

Sources tell NBC News that Sessions now remembers rejecting a proposal by Papadopoulos to set up a meeting between Trump and Russian President Vladimir Putin.

NBC News reporter Ken Dilanian, appearing on MSNBC Thursday afternoon, explained that this was significant because “he testified under oath that he was aware of no discussions with Russians, at least concerning collusion in the election.”

Dilanian then reported that many in Congress now want Sessions to come back and clarify his testimony — which would mark the third time that Sessions has had to “amend his recollections” of known contacts between the Trump campaign and Russian officials. …

Jeff Sessions Repeatedly Lied To The Senate While Under Oath

More fallout from Mueller’s first indictments in the Russia investigation. According to newly released court documents, it appears that Attorney General Jeff Sessions lied to Congress about the Trump campaign’s attempts to collude with Russian operatives. When asked during a hearing last month whether he was aware of communications between the Trump campaign and the Russians, Sessions replied, “I did not, and I’m not aware of anyone else that did…And I don’t believe it happened.”

Well, it turns out that George Papadopoulos (the Trump campaign aide who has plead guilty to making false statements to federal investigators) told Trump and Sessions about his efforts to arrange a meeting with Vladimir Putin at foreign policy briefing in March of last year.

At every turn, Sessions has tried obfuscate and mislead the American people. He has repeatedly lied to the Senate under oath and eroded the public’s trust in the Department of Justice.

What do you think?

Ex-Watergate Prosecutor Lists Off Every Crime Jeff Sessions Could Be Indicted For: ‘He’s in big trouble’

Appearing on MSNBC’s AM Joy on Saturday morning, a former Watergate prosecutor ticked off a list of crimes it appears that Attorney General Jeff Sessions may have committed that could land him in jail if he is drawn deeper into the Mueller investigation.

“Senator Al Franken (D-MN) wants to know is whether or not Sessions essentially lied under oath about whether he was aware of Russian contacts during the campaign when he sat on the very same committee and chaired the committee that George Papadopoulos sat on,” Reid began. “Do you see in this series of questions of Jeff Sessions the seeds of maybe Sessions being fired which, of course, would open the door to a non-recused attorney general who could fire Bob Mueller?”

According to Akerman, Session has other issues he may have to deal with.

“First of all, I see the seeds of Jeff Sessions possibly being indicted for perjury,” Akerman explained. “You’ve got him lying under oath before the Senate committee during his confirmation hearings, and on top of all that, it’s not just one thing, it’s not just the fact that denied meeting with any Russians when he met with [Russian diplomat] Kislyak three times. It’s not that he just denied having any knowledge about anybody in the campaign having contact with the Russians, which we now know he did because of the Papadopoulos plea. And on top of that, we have to also wonder whether or not he’s in jeopardy of being indicted for obstruction of justice by virtue of coming up with that pretext for Donald Trump to fire James Comey.”

“So he is in big trouble,” he continued. “I don’t think he will be answering these questions that Senator Franken sent him because what he says will be used against him.”

Rachel Maddow Wonders: Think About It … Would We Really Be Better Off Without Jeff Sessions As AG?

Attorney General Jeff Sessions is coming under fire for allegedly lying under oath about his knowledge of meetings between Trump campaign associates and Russian representatives. And President Donald Trump is steamed at him again, this time ostensibly for not investigating Hillary Clinton and various other Democrats.

An attorney general who isn’t recused from the Russia probe might be even scarier.

But the American people might be better off with Sessions right where he is at the head of the Justice Department, Rachel Maddow argued on Friday night. Because if Trump does force him out of office, or he resigns, that opens the door to a new attorney general who hasn’t recused himself from the investigation into possible collusion between the Trump campaign and the Kremlin.

The MSNBC host counts Trump’s latest slam against Sessions as the president’s fourth round of attacks on him. Regardless of what Trump might specifically criticize, Maddow said she suspects the key issue is always that Sessions recused himself from the Russia probe and that the president would like to take the driver’s seat on that investigation with the help of a more compliant attorney general. …