A bracing autopsy of the 2016 election—and a plan for revitalization.

The Democratic Party lost just about everything in 2016, but so far it has offered only evasive regrets and mild apologies. Instead of acknowledging gross failure and astounding errors, the party’s leaders and campaign professionals wallowed in self-pity and righteous indignation. The true villains, they insisted, were the wily Russians and the odious Donald Trump, who together intruded on the sanctity of American democracy and tampered with the election results. Official investigations are now under way.

While the country awaits the verdict, a new and quite provocative critique has emerged from a group of left-leaning activists: They blame the Democratic Party itself for its epic defeat. Their 34-page “Autopsy: The Democratic Party in Crisis” reads more like a cold-eyed indictment than a postmortem report. It’s an unemotional dissection of why the Democrats failed so miserably, and it warns that the party must change profoundly or else remain a loser.

Reading the particulars of this critique, I had the impression that maybe the party got what it deserved in 2016. I do not mean that Trump deserved to win. Indeed, “Autopsy” mentions Trump’s campaign largely in passing, and the Russians only once. But this analysis does suggest that Trump became president mainly because the Democratic campaign was inept, misguided, smug, and out of touch with the country.

“The mainstream Democratic story line of victims without victimizers lacks both plausibility and passion.” — “Autopsy: The Democratic Party in Crisis”

Much of the report’s specifics were already known in bits and pieces. But the evidence takes on a sharper edge and stronger punch as it is laid out in “Autopsy.” The task force that drafted the critique was led by journalist and media critic Norman Solomon, a Democratic convention delegate in 2008 and 2016; Karen Bernal, the Progressive Caucus chair of the California State Democratic Party; Pia Gallegos, a longtime civil-rights lawyer and activist in New Mexico; and Sam McCann, a New York–based communications specialist focused on issues of international justice. The writers are not promoting any candidate for 2020, though they are obviously kindred spirits with Bernie Sanders and his aggressive reform agenda. They do, however, want to provoke a showdown within the Democratic Party: the Clinton-Obama establishment versus the hurt and disappointed party base. The establishment has the money and the governing control; the rank-and-file agitators have the fire of their brave convictions.

This “Autopsy,” in other words, is a text for rebellion and a rough suggestion of what a born-again Democratic Party might look like. This is the heart of its indictment: “The mainstream Democratic story line of victims without victimizers lacks both plausibility and passion. The idea that the Democrats can somehow convince Wall Street to work on behalf of Main Street through mild chiding, rather than acting as Main Street’s champion against the wealthy, no longer resonates. We live in a time of unrest and justified cynicism toward those in power; Democrats will not win if they continue to bring a wonk knife to a populist gun fight.”

The authors are clearly seeking a straightforward repudiation of the governing strategy on economic issues by the last two Democratic presidents.  …

As former DNC interim chair Donna Brazile outs the Clinton campaign and DNC for rigging the 2016 primary, a group of progressive Democrats detail how their party eroded and how it can be revitalized. Real News [11/2] interviews journalist Norman Solomon, who participated in creating “The Autopsy: The Democratic Party In Crisis”. Solomon takes Brazile to task for her role in secretly assisting Hillary Clinton by leaking debate questions to the campaign.

Solomon, a long time associate with the media watchdog group Fairness and Accuracy in Media, details a growing reform movement in the party that will pressure party leadership corruption and betrayal of the party base in favor of corporate and Wall Street power interests. 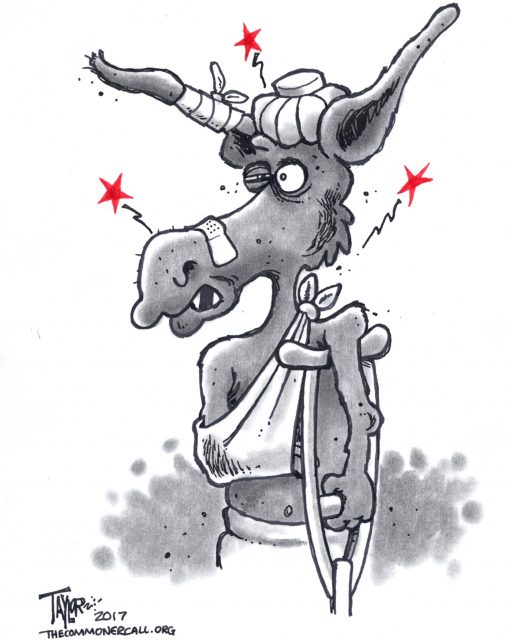 Read The “Autopsy: The Democratic Party In Crisis” – You can access the full report, executive summary and topic-by-topic section summaries HERE.