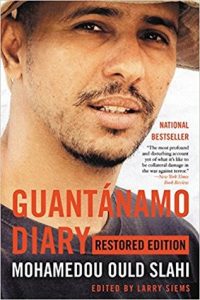 When Mohamedou Ould Slahi was released from Guantanamo Bay in 2016, after 14 years behind bars, he was finally able to read Guantanamo Diary, the bestselling book he had written while imprisoned. And for the first time, he saw the thousands of black bars the FBI had placed over much of his account of capture, torture, and interrogation. This year, Slahi and his original editor, writer and activist Larry Siems, set to work unredacting his work. Bob speaks with Siems about their efforts to finally release the full Guantanamo Diary.

Link to Story and 8-Minute Audio

Resilience in Guantanamo: More Honorable Than The Govt. That Imprisoned Him

In 2015, when we first discussed the book Guantanamo Diary, the author, Mohamedou Ould Slahi, was in his cell at Guantanamo Bay. The original, redacted version became a national bestseller, with critics noting Slahi’s spirit of resilience and hope. When Mohamedou was released last year, he began the arduous process of unredacting the censorship the US government imposed on his story. The restored edition of Guantanamo Diary was published last month. Bob talks with Slahi via Skype from his home in Mauritania and they discuss his book, his experience behind bars and what he wants people to learn about the American political and justice systems. 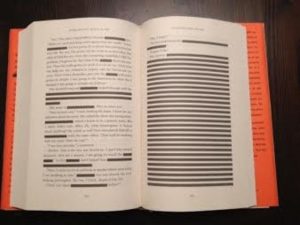 Sample of the redacted original of Mohamedou Ould Slahi’s Guantanamo Diary recounting his 14 years of imprisonment, brutal torture, solitary confinement and extended deprivation. Lack of evidence against Slahi meant nothing to the United State government. All of the injustice and years of abuse was done in our name and on our dime. Remember fellow citizens: Silence equals consent. And also remember that when societies tolerate injustice for some it is just a matter of time before all are victimized.