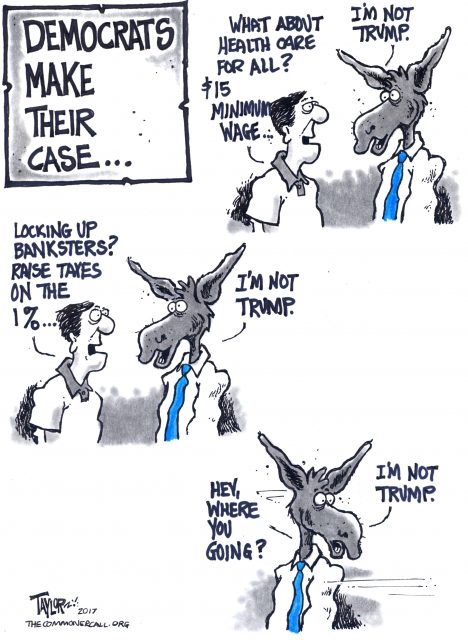 The researchers had somehow found their premise perfectly illustrated. Their journey to Trump’s America had done nothing to unsettle their preconceptions.

It was the hippies who drove Nancy Hale over the edge. She had spent three days listening respectfully to the real people of Middle America, and finally she couldn’t take it any longer.

She turned off the tape recorder and took several deep breaths, leaning back in the passenger seat of the rented GMC Yukon. The sun had just come out from behind a mass of clouds, casting a gleam on the rain-soaked parking lot in rural Wisconsin.

Hale, who is 65 and lives in San Francisco, is a career activist who got her start protesting nuclear plants and nuclear testing in the 1970s. In 2005, she was one of the founders of Third Way, a center-left think tank [The Third Way is center-right corporate mainstream. – Ed.], and it was in that capacity that she and four colleagues had journeyed from both coasts to the town of Viroqua, Wisconsin, as part of a post-election listening tour. They had come on a well-meaning mission: to better understand their fellow Americans, whose political behavior in the last election had left them confused and distressed.

The trip was predicated on the optimistic notion that if Americans would only listen to each other, they would find more that united than divided them. This notion—the idea that, beyond our polarized politics, lies a middle, or third, path on which most can come together in agreement—is Third Way’s raison d’etre. It is premised on the idea that partisanship is bad, consensus is good, and that most Americans would like to meet in the middle.

I had no doubt this was true—that Beltway Democrats were eagerly swallowing Third Way’s claims, bolstered by their firsthand accounts of the mysterious heartland.

But these are not uncontested assumptions. And, three days into their safari in flyover country, the researchers were hearing some things that disturbed them greatly—sentiments that threatened their beliefs to the very core.

The last focus group, a bunch of back-to-the-land organic farmers and artisanal small-businesspeople, was over, and the researchers had retreated to their car to debrief. There was a long pause after Hale turned off the tape recorder on which they were recording their impressions.

“I had a very hard time with that meeting,” she finally said. “The longer the meeting went on, the more it started to feel to me like just another community that had isolated itself, and it was right and everybody else wasn’t, you know?” The hippies should have been her kind of people, but the attitudes they’d expressed had offended her sense of the way America ought to be. She had come seeking mutual understanding, only to find that some people were not the least bit interested in meeting in the middle. And now she was at a crossroads: Would she have to revise her whole worldview to account for this troubling reality?

Third Way’s researchers are far from the only Americans inspired to undertake anthropological journeys in the past year. Nearly a year after Donald Trump’s election shocked the prognosticators, ivory-tower types are still sifting through the wreckage. Group after group of befuddled elites has crisscrossed America to poke and prod and try to figure out what they missed—“Margaret Meads among the Samoans,” one prominent strategist remarked to me. …

Read the Rest and 31-Audio Reading of Article