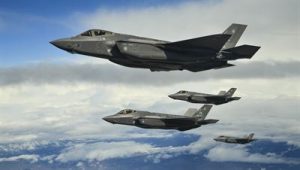 U.S. troops are now conducting 3,500 exercises, programs, and engagements per year, an average of nearly 10 missions per day, on the African continent, according to the U.S. military’s top commander for Africa, General Thomas Waldhauser. The latest numbers, which the Pentagon confirmed to VICE News, represent a dramatic increase in U.S. military activity throughout Africa in the past decade, and the latest signal of America’s deepening and complicated ties on the continent.

With the White House and the Pentagon facing questions about an Oct. 4 ambush in Niger in which four U.S. Special Forces soldiers were killed, Secretary of Defense James Mattis reportedly indicated to two senior members of the Senate Armed Services Committee Friday that these numbers are only likely to increase as the U.S. military shifts even greater attention to counterterrorism in Africa.

“The huge increase in U.S. military missions in Africa over the past few years represents nothing less than a shadow war being waged on the continent.”

But the U.S. military has already seen significant action in Africa, where its growth has been sudden and explosive. When U.S. Africa Command, the umbrella organization for U.S. military operations on the continent, first became operational in 2008, it inherited 172 missions, activities, programs, and exercises from other combatant commands. Five years in, that number shot up to 546.

Today’s figure of 3,500 marks an astounding 1,900 percent increase since the command was activated less than a decade ago, and suggests a major expansion of U.S. military activities on the African continent. (VICE News requested 2016 numbers, but AFRICOM failed to answer phone calls or respond to email requests.)

“The huge increase in U.S. military missions in Africa over the past few years represents nothing less than a shadow war being waged on the continent,” said William Hartung, the director of the Arms and Security Project at the Center for International Policy.

These developments stand in stark contrast to early assurances that AFRICOM’s efforts would be focused on diplomacy and aid. …

As U.N. Ambassador Nikki Haley travels in Africa and the Senate Foreign Relations Committee held a classified briefing Thursday with Pentagon officials on the deadly ambush in Niger, where five Nigerien soldiers were killed along with four U.S. soldiers, we speak with reporter Nick Turse, who says U.S. military activity in Africa is a recruiting tool for terror groups.

Link to Story and 35-Minute Video

he vast majority of Americans probably had no idea that the US even had military troops participating in combat missions in Africa before the incident in Niger in the beginning of October that left four American soldiers dead. But now the Trump administration is already planning to escalate lethal military operations in the country where the attack occurred – all with little debate.

Donald Trump has been involved in a bizarre public feud with the families of the fallen soldiers, which has dominated headlines and cable television for weeks. But there has been far less pointed questions about why the US military is fighting in Niger at all, and yet it seems likely that there’s about to be more US military presence in the country that will only make matters worse.

It’s the ‘war on terror’ circle of life: send troops into a country to “advise and assist”, troops inevitably get killed by local militants when they inevitably engage in combat missions, send more troops in to “fix” the problem. Rinse. Repeat.

As NBC News reported on Wednesday night: “The Trump administration is paving the way for lethal strikes against terrorists in Niger as the US military pushes forward with a plan to arm the Reaper drones that fly over that country.” Meanwhile, Republicans are also hinting that more military personnel may be on the way as well.

It apparently doesn’t matter to the Trump administration that there’s no congressional authorization to do so. They are following in the Obama administration’s footsteps by taking the radical view that the Authorization of Use of Military Force (AUMF), passed in 2001 for the war in Afghanistan, can be used to fight all sorts of wars throughout the world more than 16 years later. …