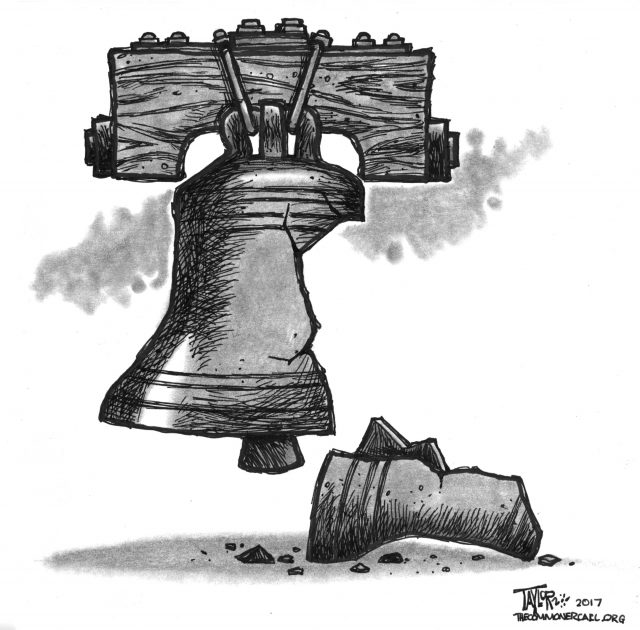 “If current trends continue for another 20 or 30 years, democracy will be toast.”

Is American democracy in decline? Should we be worried?

On October 6, some of America’s top political scientists gathered at Yale University to answer these questions. And nearly everyone agreed: American democracy is eroding on multiple fronts — socially, culturally, and economically.

The scholars pointed to breakdowns in social cohesion (meaning citizens are more fragmented than ever), the rise of tribalism, the erosion of democratic norms such as a commitment to rule of law, and a loss of faith in the electoral and economic systems as clear signs of democratic erosion.

No one believed the end is nigh, or that it’s too late to solve America’s many problems. Scholars said that America’s institutions are where democracy has proven most resilient. So far at least, our system of checks and balances is working — the courts are checking the executive branch, the press remains free and vibrant, and Congress is (mostly) fulfilling its role as an equal branch.

But there was a sense that the alarm bells are ringing.

In 1995, one in 16 Americans supported Army rule; in 2014, that number increased to one in six. According to another survey cited at the conference, 18 percent of Americans think a military-led government is a “fairly good” idea.”

Yascha Mounk, a lecturer in government at Harvard University, summed it up well: “If current trends continue for another 20 or 30 years, democracy will be toast.”

Nancy Bermeo, a politics professor at Princeton and Harvard, began her talk with a jarring reminder: Democracies don’t merely collapse, as that “implies a process devoid of will.” Democracies die because of deliberate decisions made by human beings.

Usually, it’s because the people in power take democratic institutions for granted. They become disconnected from the citizenry. They develop interests separate and apart from the voters. They push policies that benefit themselves and harm the broader population. Do that long enough, Bermeo says, and you’ll cultivate an angry, divided society that pulls apart at the seams.

Adam Przeworski, a democratic theorist at New York University, suggested that democratic erosion in America begins with a breakdown in what he calls the “class compromise.” His point is that democracies thrive so long as people believe they can improve their lot in life. This basic belief has been “an essential ingredient of Western civilization during the past 200 years,” he said.

But fewer and fewer Americans believe this is true. Due to wage stagnation, growing inequalities, automation, and a shrinking labor market, millions of Americans are deeply pessimistic about the future: 64 percent of people in Europe believe their children will be worse off than they were; the number is 60 percent in America.

That pessimism is grounded in economic reality. In 1970, 90 percent of 30-year-olds in America were better off than their parents at the same age. In 2010, only 50 percent were. Numbers like this cause people to lose faith in the system. What you get is a spike in extremism and a retreat from the political center. That leads to declines in voter turnout and, consequently, more opportunities for fringe parties and candidates.

Political polarization is an obvious problem, but researchers like Przeworski suggest something more profound is going on. …

Webster’s Dictionary defines terrorism as the “calculated use of violence (or threat of violence) against civilians in order to attain goals that are political or religious or ideological in nature.” To hear neocons, Republicans, the Christian right and the so-called alt-right tell it, such violence is exercised primarily by Muslims and people of color. But history does not bear that out in the least, especially in the United States. For all the damage they’ve inflicted, Jihadist organizations such as ISIS, al-Qaeda and the Taliban do not have the market cornered on violent extremism. While it’s true that the deadliest terrorist attack in U.S. history—al-Qaeda’s assault on the World Trade Center and the Pentagon on 9/11—was carried out by far-right Islamists, most of the country’s recent domestic terrorist activity has come from a combination of white supremacists, white nationalists, neo-Nazis, extreme Christianists and far-right militia groups.

Charlottesville wasn’t the first such attack, and it likely won’t be the last.

From the Oklahoma City bombing in 1995, which killed 168 people, to Christianist Jim David Adkisson’s rampage at the Tennessee Valley Unitarian University Church in Knoxville, Tennessee, on July 27, 2008, far-right white terrorism has posed the most persistent domestic terrorist threat in the U.S. And under President Donald Trump, white extremists have grown emboldened, as evidenced by the murder of activist Heather D. Heyer in Charlottesville, Virginia, in August.

We may never know the motivations or political ideology of the Las Vegas shooter, but one thing is for certain: that is one mass killing that Fox News and Ann Coulter won’t be able to blame on people of color. Here are 10 disturbing examples of terrorism carried out by white supremacists, white nationalists or radical Christianists in recent years. …