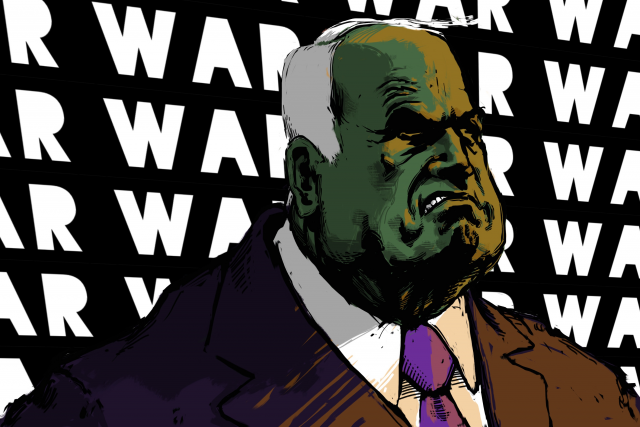 Sen. John McCain (R-Ariz.) delivered his “Liberty Medal” acceptance speech at the National Constitution Center Monday night, and his remarks were immediately met with “fawning” praise by former presidents, current elected officials, and cable news talking heads. But critics were quick to warn that such adulation risks further normalizing American interventionism and endless war—both of which McCain has consistently and enthusiastically supported—in the name of rejecting what the Arizona senator labeled “spurious nationalism.”

“McCain’s speech was designed to flatter Americans with self-glorifying tales of exceptionalism and nobility. And of course, it worked,” Glenn Greenwald, co-founder of The Intercept, wrote on Twitter Tuesday. “Many Americans will cheer and swoon and applaud for any speech that tells them how great and noble and kind their country and its wars are.”

Though McCain’s remarks didn’t contain a single mention of President Donald Trump, his speech was widely perceived as an attack on the president and his “nationalistic” supporters, like Breitbart executive chairman and former White House chief advisor Steve Bannon.

“Trump’s ascension to the presidency has fooled many into believing that conservatives are now their friends—despite the fact that their votes consistently prove otherwise.”

In a passage of the speech that was widely and favorably quoted, McCain declared that Americans are “the custodians of ideals at home, and their champions abroad,” and that the U.S. has “done great good in the world.”

“That leadership has had its costs, but we have become incomparably powerful and wealthy as we did,” McCain continued. “We have a moral obligation to continue our just cause, and we would bring more than shame on ourselves if we don’t. We will not thrive in a world where our leadership and ideals are absent. We wouldn’t deserve to.”

Contrary to the sentiment of the applauding chorus, Greenwald characterized these lines as precisely the kind of “jingoistic revisionism about U.S. benevolence” that has fueled America’s endless wars overseas.

While McCain claimed to be attacking nationalism in the name of American “ideals,” he was in reality merely pushing his own version of U.S. nationalism that “has cheered countless wars and left a massive body count of innocents all over the world,” Greenwald concluded.

The irony is McCain was cheered for denouncing “half-baked, spurious nationalism” while his whole speech (& career) was based purely in that.

Eleanor Sheehan of Splinter News expressed a similar sentiment in response to the American media’s overwhelming praise for McCain’s speech.

“Stop fawning over John McCain,” Sheehan urged. “Lest we forget that McCain is a war hawk who has a history of making opaquely racist comments and ran for president on a ticket with Sarah Palin.”

“Trump’s ascension to the presidency has fooled many into believing that conservatives are now their friends—despite the fact that their votes consistently prove otherwise,” Sheehan concluded. “By enabling a ‘spurious’ nationalist like Trump through the approval his ‘half-baked’ policies, doesn’t that make McCain somewhat of nationalist himself—or at least partially culpable?”

(This work is licensed under a Creative Commons Attribution-Share Alike 3.0 License.)
Link to Story
(Commoner Call art by Seth L. Taylor, 2017. Open source and free to sue with link to www.thecommonercall.org )
*****

George W. Bush Condemns Trumpism, But Glosses Over His Critical Role In The Disaster

Bush, speaking at the George W. Bush Institute-hosted “Spirit of Liberty” forum in New York City, outlined what he said were “new and serious threats” to democracy.

He didn’t mention Trump by name. But much of the speech was a rebuke of the ethos of the pro-Trump movement. Bush condemned the trend of “nationalism distorted into nativism.” He criticized blanket rejections of globalization, arguing that “conflict, instability and poverty follow in the wake of protectionism.” He condemned anti-immigrant rhetoric, reminding his audience of the “the dynamism that immigration has always brought to America.” He lamented that bigotry now “seems emboldened” and that “our politics seems more vulnerable to conspiracy theories and outright fabrication.”

Some of Bush’s barbs were even more sharply pointed at the president.

“Bullying and prejudice in our public life sets a national tone, provides permission for cruelty and bigotry, and compromises the moral education of children,” he said. “The only way to pass along civic values is to first live up to them.”

He explicitly condemned white supremacy, something many Republicans, including Trump, have failed to do.

“Bigotry or white supremacy in any form is blasphemy against the American creed,” Bush said.

But Bush failed to acknowledge his own significant role in the rise of Trump.

As Ryan Grim and Alexander Zaitchik wrote for HuffPost earlier this year, policies implemented by Bush and his administration “created the conditions that brought Trump to power.”

The rise of nationalism and the rejection of globalization, for example, is directly tied to the economic anxiety that followed the 2007-2008 financial crisis. Many of the key factors in Trump’s appeal to voters — including his promises to bring back jobs from overseas — can be linked to conditions created by the recession.

Bush’s decision to invade Iraq, meanwhile, had catastrophic ripple effects in the Middle East and beyond …