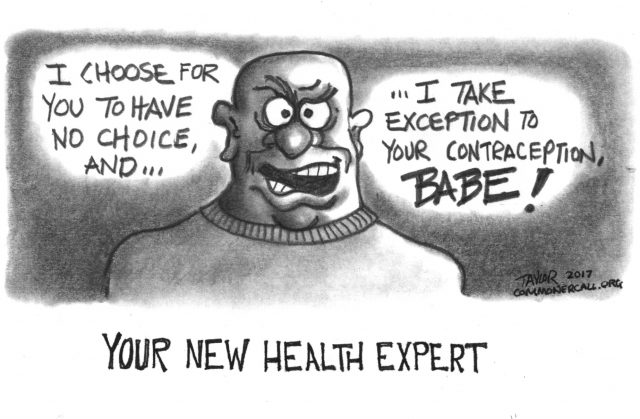 There were so many things to be angry about last week that it’s understandable if you missed this one: The draft of the Department of Health and Human Services 2018–2022 strategic plan contains language that claims life begins at conception. As an ob-gyn, I’m alarmed. You should be, too.

The HHS strategic plan is drafted every four years, intended to clarify the administration’s focus; under President Barack Obama, for example, the 2014–2018 plan highly prioritized matters relating to health insurance. The introduction for that plan contained this line:

HHS accomplishes its mission through programs and initiatives that cover a wide spectrum of activities, serving Americans at every stage of life.

HHS accomplishes its mission through programs and initiatives that cover a wide spectrum of activities, serving and protecting Americans at every stage of life, beginning at conception.

This new phrasing means one thing: personhood, the ideology that a fertilized egg has the same rights as a woman. The word “unborn” also appears in the new plan.

I cannot stress enough how worrisome this is. The HHS isn’t some obscure government organization; it has a budget of $1 trillion and controls Medicaid, Medicare, the Centers for Disease Control and Prevention, the National Institutes of Health, the Food and Drug Administration, and the Indian Health Service. The HHS oversees how we study medicine, how we approve medications and medical devices, how we provide medical care, and how we track health outcomes. If a fertilized egg is defined as the start of life in the final draft of the HHS plan, this could have sweeping and devastating consequences for everyone, and not just women.

For instance, abortions are not paid for with federal money, but could the HHS stop all federal Medicaid funds for states that pay for abortion with state Medicaid dollars? Could Medicaid stop paying for IUDs? Could the FDA make it more difficult to get a new method of contraception approved? Could health plans be pressured into eliminating coverage for IUDs or infertility therapy? Could the NIH stop awarding grants to study contraception or treatment for infertility? Could the CDC use inappropriate metrics for tracking abortion outcomes? Could infertility treatments be considered the same as abortion?

And yet this shouldn’t come as a surprise. …

The draft of the HHS strategic plan is currently open for public comment. You have until October 27 to have your say.

Medical school faculty and students on Tuesday called a bill that would bar them from performing abortions a “serious threat” to OB-GYN training in Wisconsin.

Opponents to the plan say the UW School of Medicine and Public Health’s OB-GYN training program would lose its accreditation if it were approved.

At a public hearing on the bill, Joseph Lalli, a medical school student, said he wouldn’t feel prepared to perform life-saving procedures for expectant mothers if he can’t get training on how to perform abortions.

“Many common medical complications that arise during pregnancy can only be treated by delivering the fetus,” Lalli said. “I need to know how to perform this technique, and I don’t see how I’m going to be able to if this bill passes.”

Lalli cited conditions like preeclampsia, which requires terminating pregnancy to prevent death of the mother.

“If students like me never learn how to perform these techniques, women will suffer,” he said.

The bill would allow abortion training, but it would have to occur at a hospital. Lalli argued an emergency room setting would be a “chaotic” learning environment.

UW School of Medicine and Public Health leadership also testified that the bill, if passed, would lead to declining enrollment in the school’s OB-GYN program and the departure of faculty, contributing to Wisconsin’s OB-GYN shortage.

“If this bill passes, it destroys our OB-GYN residency training program,” said Robert Golden, dean of the UW School of Medicine and Public Health. “This is not a bill about abortions, this is a bill about training the next generation of OB-GYN doctors.”

The bill would also bar employees of the UW System or hospital and clinics from performing abortions at Planned Parenthood. Some UW faculty perform abortions and train students there now. …

Contraception is hardly a new or radical feminist notion. Throughout the ages, women have sought to control how and when or whether they became pregnant. In 3000 BC, for example, it was reported that condoms made from goat bladders and other animal intestines were used. We’ve come a long way, but the recent move by the Trump Administration to restrict access to contraception promises to turn back the clock.

Restricting women’s ability to control how and when they become pregnant is also not new. It was the 1873 Comstock Act that first banned advertisements, information, and the distribution of birth control in the United States. In 1914, Margaret Sanger was jailed for distributing birth control and reproductive health information from the nation’s first, albeit secret, birth control clinic, in Brooklyn.

Restricting women’s access to affordable contraception is only part of a broader attack on programs that seek to improve the reproductive health of women and girls, and specifically the most vulnerable among us.

It took until 1972 before the right to birth control was legalized for all citizens in the Supreme Court case “Baird v. Eisenstadt.” Another milestone moment came in 2010 with the passage of the Affordable Care Act, which provided coverage for contraception without co-pays, a provision the Trump Administration now seeks to undo.

In the last decade, the U.S. has seen a steep reduction in unintended pregnancy and elective abortion. In fact, in just three years, between 2008 and 2011, the rate of unintended pregnancy fell by 18 percent. Despite these gains, however, 45 percent of the estimated six million pregnancies in the U.S. each year are unintended, with significant health, social, and economic costs. The unintended pregnancy rate in this country remains high compared to other high-income nations.

The decision by the Departments of Health and Human Services, Labor and Treasury to allow religious or moral objections to covering contraception under the preventive services requirement of the Affordable Care Act threatens to undo recent gains and stymie further progress.

Affordability is a big deal. The cost of contraception is a barrier for many women, and the methods most effective at preventing unintended pregnancy are also the most expensive. Before the ACA, IUDs (which are 99 to 99.8 percent effective at preventing pregnancy) cost nearly $1000 for insertion and follow-up visits. Following the ACA, women’s out-of-pocket spending on birth control dropped considerably.

Even before the ACA expansion, numerous studies showed that when cost barriers are addressed, the use of the most effective contraceptive methods increases, and the rate of unplanned pregnancies decreases – a fact that the Administration is disputing as rationale for allowing a roll-back of women’s access to contraception. When Colorado made long-acting reversible contraception available without cost, the unintended pregnancy rate among women age 20-24 dropped by 20 percent and the abortion rate by 18 percent.

Recognizing the powerful benefits of affordable contraception, a majority of Americans support access to birth control, as shown in study after study. A national survey released in 2014 found that 71 percent of all voters, including men and women, said prescription birth control should be included as preventive health care services, covered without any out-of-pocket costs.

Nevertheless, the current administration has sought not only to reinstate restrictive laws of the past, but to expand the restrictions. …

Read the Rest and 2-Minute Video (Warning: You may have to endure a brief anti Tammy Baldwin ad.)