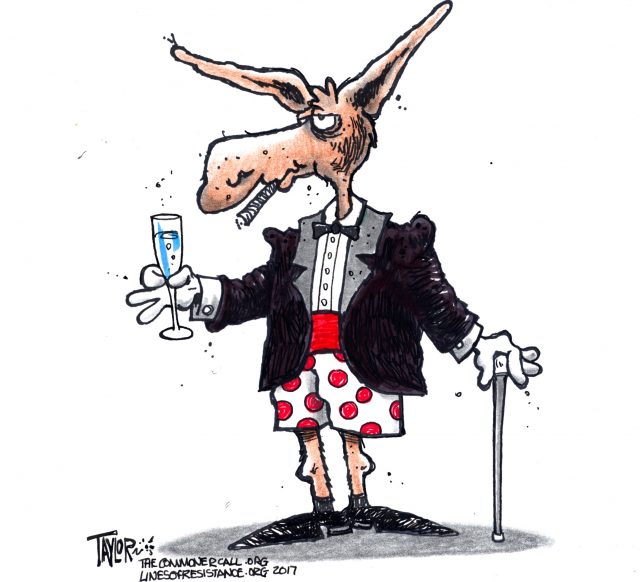 Sparking concerns that party leadership is making the same mistakes that have rendered them increasingly powerless and without an inspiring vision, the Democratic National Committee (DNC) is reportedly carrying out a massive staff shake-up in which veteran progressives are being purged and “left out in the cold.”

“This doesn’t bring the party together, it deepens the divide at a time we need all hands on deck,” James Zogby, president of the Arab American Institute and prominent Sanders supporter who was ousted from the DNC Executive Committee, wrote on Twitter Thursday.

According to Alex Seitz-Wald of NBC News, Zogby is hardly alone.

“[S]everal key longtime officials have lost their posts” since the staff changes began,” Seitz-Wald writes, a fact that many have interpreted as “retaliation for their opposition to DNC Chairman Tom Perez.”

“The DNC and party leadership truly do not give a shit about progressives outside of their use as deflection.”
—Isaiah Breen

“The removal and demotion of a handful of veteran operatives stood out, as did what critics charge is the over-representation of Clinton-backed members on the Rules and Bylaws Committee, which helps set the terms for the party’s presidential primary, though other Sanders and Ellison backers remain represented,” Seitz-Wald added.

Some of the other prominent progressives who have been shifted to less influential positions or removed altogether include:

Germond, who was removed from her role as at-large member, told NBC that she assumed her ouster “had something to do” with her support for Ellison.

“It is quite unusual for a former party officer who has been serving on the DNC for forever to just be left out in the cold without even a call from the chairman,” Germond said. “I understand that I fought very hard for Keith Ellison. And I understand that to the winners go the spoils.”

Deadset in pursuit of failure

The massive staff shake-up came just ahead of the DNC’s Fall meeting on Thursday in Las Vegas, where members and party officials will gather to participate in meeting and “training sessions.”

When Perez emerged victorious over the progressive favorite Ellison in the race for DNC chair, many arguedthat the party is deadset on pursuing a failed strategy that places the priorities of out-of-touch party insiders over those of the grassroots base.

News of the DNC’s staff changes sparked similar criticism from organizers and commentators, who argue that Democrats are resisting the changes necessary to bring the party back from the political wilderness.

Others expressed similar feelings of dismay and outrage on social media. [Follow link below.]

“It’s a slap in the face to the activists in the party that are working so hard to make the party more responsive to the grassroots,” said Charles Chamberlain, executive director of Democracy for America, a digital grassroots group. “The idea that you’re going to purge Ellison supporters and bring the party together doesn’t make any sense at all.”

Becky Bond, founder of Knock Every Door and a veteran of Sen. Bernie Sanders’ 2016 Democratic presidential campaign, argued that the decision to remove Ellison surrogates puts Ellison, whom Perez brought on as deputy DNC chairman, in a “really hard place.”

“Ellison is someone who is the voice of the activists and grassroots of the Democratic Party,” Bond said. “If the grassroots feel Ellison is being ignored, that’s going to read that our priorities are being ignored.”

Ahead of the DNC’s first meeting under Perez’s leadership, which began Thursday in Las Vegas, Perez released his roster of 75 at-large DNC members as well as appointments to key DNC committees.

The debate is now between supporters of all politicians who want to wipe corporate influence out of the party and those who do not.

Activists immediately noticed that four Ellison supporters either lost their at-large posts or spots on influential committees. James Zogby, president of the Arab-American Institute and a top Sanders backer, was removed from the Executive Committee, which has major budgetary authority. Ray Buckley, the New Hampshire Democratic Party chairman who earned praise for treating Sanders fairly, lost spots on both the DNC Executive Committee and the Rules and Bylaws Committee, which regulates the party presidential primary.(Buckley endorsed Ellison for chair after ending his own bid to lead the organization.)

Barbara Casbar Siperstein, the DNC’s first transgender member, was removed from the Executive Committee and the DNC at-large roster. Alice Germond, who worked as a secretary for the DNC for decades, lost her at-large DNC spot as well.

Of the four, at least one regained a top post through other means. Buckley picked up a spot on the Executive Committee on Friday afternoon, after members of the DNC’s Eastern Caucus elected him to represent them on the influential body. A bid by Zogby to do the same was unsuccessful.

For the broad camp of progressive Democrats (mainly Ellison or Sanders supporters) concerned about making the party more accountable to the grassroots and bringing in more independents, seats on the Rules Committee are especially prized.

Many activists felt that the DNC inappropriately put a finger on the scale for presidential candidate Hillary Clinton in the 2016 primary, and now worry that it will not adopt a fairer process in 2020. The Rules Committee is charged with considering the recommendations of the DNC’s Unity and Reform Commission, a panel convened to reform the presidential nominating process that will present its slate of suggestions by the end of the year. (The commission consists of 10 Clinton appointees, eight Sanders appointees and three Perez picks.)

Reformers hope that the party will accept a dramatically reduced role for superdelegates ― the party officials who can vote in presidential primaries independent of the will of the primary voters in their state ― as well make it easier for independents to participate in primaries and other party functions. …