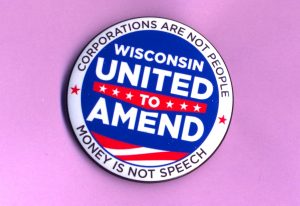 Nineteen states have called for a Constitutional amendment that would overturn the disastrous Citizens United decision. Representative Scott Allen won’t even allow a public hearing on a resolution that would let Wisconsinites vote on this core issue of our time. While many politicians may like unlimited and often undisclosed campaign contributions, the rest of America is disgusted by it.

Last week, Allen refused a request to have AJR 53 placed on the public hearing agenda, calling the advisory referendum, “politics at its worst”. Wisconsin law provides for advisory referendums. There was a statewide referendum in 2006 pertaining to the death penalty.

“Politics at its worst”… really??

This is a cross-partisan issue. There are plenty of billionaires on both sides of the aisle. Both parties are raking in campaign cash. Money talks and the rest of us have no say.

It’s outrageous that Chairman Allen won’t even allow this to be put on the agenda. This is the Constitution and Ethics Committee, after all. And Citizens United has torn a hole into our Constitution, drowning out our free speech rights as citizens, and ushering in all sorts of ethical problems.

These resolutions (AJR 53 / SJR 54) were introduced by Representative Lisa Subeck (D-Madison) and Senator Dave Hansen (D-Green Bay). Polls show a vast majority of Americans view our election system as corrupt. Special interest money has enormous political influence and everyday citizens feel they are getting no representation.

“It is stunning that Republican Representative Scott Allen considers giving the average Wisconsinite the opportunity to have their say at the ballot box to be ‘politics at its worst,’” said Rep. Subeck. “Wisconsinites are fed up with the massive corporate and special interest spending Citizens United has ushered into our elections, and it is time to let them be heard.”

Please contact Scott Allen (608-266-8580 / Rep.Allen@legis.wisconsin.gov), and urge him to hold a public hearing on AJR 53 – demand that he let the people speak about the urgent need to proclaim, once and for all, that only people have inalienable rights and money is not the same thing as free speech.

United To Amend is a non-partisan, all volunteer citizens group. For more information visit UnitedToAmend.org