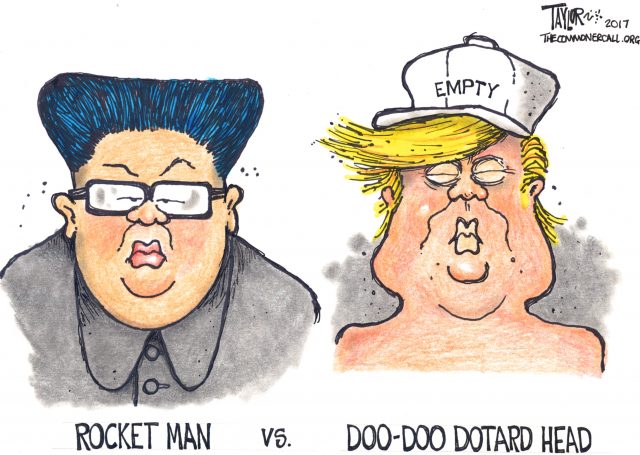 First Donald Trump, inexplicably in the ill-fitting role of the President of the United States of America, threatens to go totally criminal, to “totally destroy” North Korea. This violates international laws to which past US presidents have signed and far better US Senates have ratified. Killing civilians. Shooting rockets into cities. Committing genocide. All totally immoral and illegal.

Then the Spoiled Brat Ruler of North Korea responds: ‘I will surely and definitely tame the mentally deranged U.S. dotard with fire.’

How, how on God’s green Earth could humankind have permitted us to be in this untenable position, with aged boys taunting and reviling each other, manchild specimens whose only actual achievements were being born sons of powerful men? The tween in his dotage in the US is far older, but no wiser, just a sad blustering narcissist seemingly utterly unaware of just what a pathetic cheap fool he is. The twerp in North Korea earned nothing, son of a son of a brutal ruler, as endowed with a human conscience as, say, Uday Hussein or Curtis LeMay.

Seriously, humankind, what are we going to do?

These are two poor excuses for humans, clearly addled by their upbringings and the forbearance shown them even when their behavior is kindergarten immature, even when testosterone, greed, gluttony and power over others corrupts all their actions.

And, dammit, they both have nuclear arsenals.

Seriously, humankind, what are we going to do? Even Nixon, as maniacal as he was, visited Leonid Brezhnev and gave him a Cadillac. He really thought better about starting an atomic slugfest.

How many times has the US conducted intimidating war games all around the northern half of the Korean Peninsula? How many North Korean civilians were slaughtered mercilessly by the US military in the 1950-’53 bloodletting, in attacks on North Korean cities, towns, and villages? Just sayin’.

If we would prefer to avoid a nuclear war, if we would rather not have a few US cities immolated and Far East Asia burned down, the US and North Korean peoples need to swing into action, and, as we live in a putative democracy in the US, our duty is even more clear than that of North Koreans.