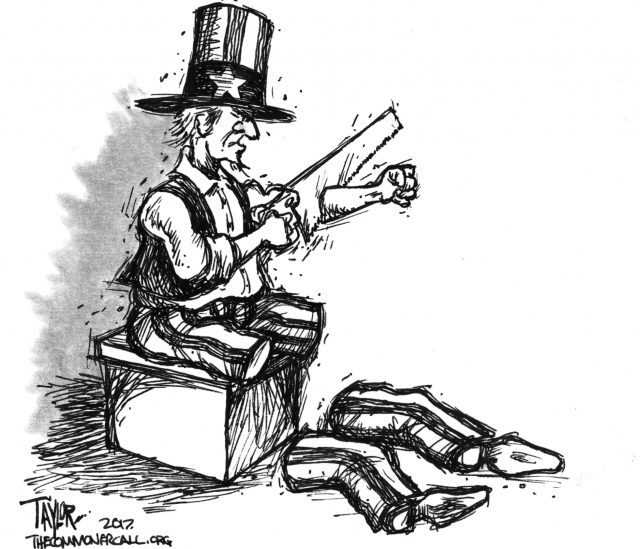 How many times will we rebuild Florida’s cities, Houston, coastal New Jersey, New Orleans and other population centers ravaged by storms lethally intensified by global warming? At what point, surveying the devastation and knowing more is inevitable, will we walk away, leaving behind vast coastal dead zones? Will we retreat even further into magical thinkingto cope with the fury we have unleashed from the natural world? Or will we respond rationally and radically alter our relationship to this earth that gives us life?

Civilizations over the past 6,000 years have unfailingly squandered their futures through acts of colossal stupidity and hubris. We are probably not an exception. The physical ruins of these empires, including the Mesopotamian, Roman, Mayan and Indus, litter the earth. They elevated, during acute distress, inept and corrupt leaders who channeled anger, fear and dwindling resources into self-defeating wars and vast building projects. The ruling oligarchs, driven by greed and hedonism, retreated into privileged compounds—the Forbidden City, Versailles—and hoarded wealth as their populations endured mounting misery and poverty. The worse it got, the more the people lied to themselves and the more they wanted to be lied to. Reality was too painful to confront. They retreated into what anthropologists call “crisis cults,” which promised the return of the lost world through magical beliefs.

“The most significant characteristic of modern civilization is the sacrifice of the future for the present,” philosopher and psychologist William James wrote, “and all the power of science has been prostituted to this purpose.”

“The existential peril facing the empire is not in the Middle East but in the seas and the skies.”

We are entering this final phase of civilization, one in which we are slashing the budgets of the very agencies that are vital to prepare for the devastation ahead—the National Oceanographic and Atmospheric Administration, the Federal Emergency Management Administration and the Environmental Protection Agency, along with programs at the National Aeronautics and Space Administration dealing with climate change. Hurricane after hurricane, monster storm after monster storm, flood after flood, wildfire after wildfire, drought after drought will gradually cripple the empire, draining its wealth and resources and creating swathes of territory defined by lawlessness and squalor.

There will soon come a day…

As this column is being written, three key military facilities in Florida are evacuated: the Miami-area headquarters of the U.S. Southern Command, which oversees military operations in the Caribbean and Latin America; the U.S. Central Command in Tampa, in charge of overseas operations in the Middle East and Southwest Asia; and the Naval Air Station in Key West. There will soon come a day when obliteration of infrastructure will prohibit military operations from returning. Add to the list of endangered military installations Eglin Air Force Base in the Florida Panhandle, the U.S. missile base in the Marshall Islands, the U.S. naval base on Diego Garcia and numerous other military sites in coastal areas and it becomes painfully clear that the existential peril facing the empire is not in the Middle East but in the seas and the skies. There are 128 U.S. military installations at risk from rising sea levels, including Navy, Air Force, Marine and Army facilities in Virginia. Giant vertical rulers dot the highway outside the Norfolk naval base to allow motorists to determine if the water is too deep to drive through. In two decades, maybe less, the main road to the base will be impassable at high tide daily.

Cities across the globe, including London, Shanghai, Rio de Janeiro, Mumbai, Lagos, Copenhagen, New Orleans, San Francisco, Savannah, Ga., and New York, will become modern-day versions of Atlantis, along with countries such as Bangladesh and the Marshall Islands and large parts of New Zealand and Australia. There are 90 coastal cities in the U.S. that endure chronic flooding, a number that is expected to double in the next two decades. …