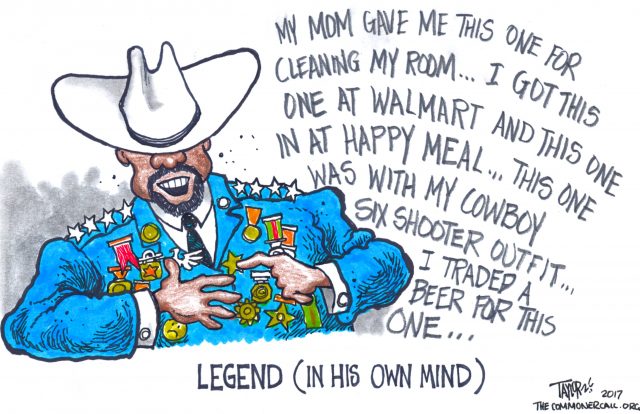 So where’s the medal for ‘Baloney’, David?

Milwaukee Sheriff David Clarke emerged onto the national scene last year with his fervent support of Republican Donald Trump, despite the fact he was a Democrat. Clarke’s embrace of Trump’s politics — and of Trump’s intemperate rhetorical style — earned him a speaking slot at the Republican convention last year. It also overlapped with a great deal of scrutiny about his behavior as sheriff, including a number of deaths at jails under his jurisdiction.

Clarke’s political energy and background made him a deeply controversial figure, and the subject of a great deal of praise and criticism. Earlier this month, he became the target of a perhaps unexpected bit of critique, when a veteran took issue with Clarke’s appearance at the convention.

This is a pin for the Israeli civil guard, a branch of the Israeli police that serves as a sort of neighborhood watch since terrorist attacks in the mid-1970s. At other times, Clarke has worn a badge for the Israeli traffic police.

“Look at this f‑‑‑ing guy’s uniform,” Charles Clymer wrote on Twitter. “You see all that s‑‑t pinned all over his dress uniform jacket? That’s not supposed to be there.”

His objection was that the decorations on Clarke’s uniform project “authority” — but that they themselves are meaningless. “Colin Powell once described a dress uniform as a soldier’s résumé,” he wrote. “You can tell what they’ve done by their ribbons and badges.” More ribbons and medals mean a lengthier résumé, in other words — which wasn’t the case with Clarke’s regalia.

Clymer’s tweets kicked up a whole separate dust storm of criticism and defense of the sheriff. Snopes compiled various views of Clarke’s attire, including critics and defenders.

Clarke himself addressed the controversy in an interview on Newsmax TV.

They “have very significant emotional and real value to me,” Clarke explained, as transcribed by Snopes. “Some of these have been handed to [me] by people who have lost sons and daughters in the line of duty, or a spouse. So in support of like the C.O.P.S. — Concerns of Police Survivors — organization, I wear a ribbon for that. Some of these I have earned and some of these designate my completion of the FBI National Academy — they give you a pin. I wear that pin on my uniform.”

He continued: “I’ve also been given pins by survivors of the 9/11 terror attacks in New York City, from cops, from people who lost sons and daughters in those attacks, talking about from law enforcement. And those things mean something to me, you know I honor them. I put them on the thing that’s most important to me, and that’s the uniform.”

In light of that, we decided to try to figure out what all of the badges and indicia were that Clarke wore to the convention. We reached out to Clarke’s office, which at first declined to grant an interview. That changed — but we’ll get to that in a bit.

So here are the 22 things on Clarke’s uniform when he spoke at the convention in July, and, where possible, what the items represent.  …