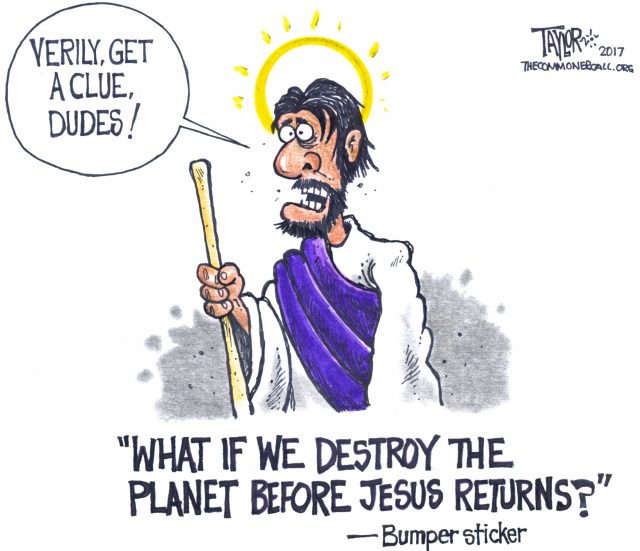 This is what climate change looks like. Entire metropolitan areas — Houston in the United States and Mumbai in India — submerged in catastrophic floods.

They used to make Hollywood disaster movies about this sort of thing. Now it’s just the news.

Officials as senior as Kellyanne Conway, counselor to President Donald Trump, have suggested that now — during a natural disaster — is not the time to raise the divisive and highly politicized issue of global warming. But if not now, when? After the waters subside, the news crews pack up, and the long task of rebuilding begins, the world’s attention inevitably moves on.

We all have a duty to confront denial and speak out. If we fail, the Harveys, Katrinas and Sandys of the future will be even worse than the storms we experience today.

Watching Trump tour the flooded areas, I was reminded of his Rose Garden press conference less than three months ago announcing the US withdrawal from the Paris climate treaty. In that act of wanton international vandalism, Trump was helping condemn millions more people to the threat of intensified extreme events in future decades.

It is not politically opportunistic to raise this issue now. Instead we have a moral duty not to accept the attempted conspiracy of silence imposed by powerful political and business interests opposed to any reduction in the use of fossil fuels. We owe this to the people of Texas as much to those of Bangladesh and India, and Niger — which was also struck by disastrous flooding this week.

Climate disasters demonstrate our collective humanity and interdependence. We have to help each other out — in the short term by saving lives and in the longer term by cutting greenhouse gases and enhancing resilience, especially in developing countries.

This is not scientifically controversial. There is a straightforward physical relationship between a warming atmosphere and extreme rainfall potential. …

George Monbiot: We Can’t Be Silent On Climate Breakdown Or The Unsustainability Of Capitalist System

While Houston continues to deal with the aftermath of Hurricane Harvey, we look at the media silence on the human contribution to the record-breaking storm.

British journalist and author George Monbiot wrote that despite 2016 being the hottest year on record, the combined coverage during the evening and Sunday news programs on the main television networks amounted to a total of 50 minutes in all of last year. “Our greatest predicament, the issue that will define our lives, has been blotted from the public’s mind,” he wrote. The silence has been even more resounding on climate-related disasters in areas of the world where populations are more vulnerable—most recently, on the devastating floods across the globe, from Niger to South Asia. Over the past month, more than 1,200 people have died amid flooding in Bangladesh, Nepal and India. This year’s monsoon season has brought torrential downpours that have submerged wide swaths of South Asia, destroying tens of thousands of homes, schools and hospitals. Meanwhile, in Niger, West Africa, thousands of people have been ordered to leave their homes in the capital Niamey after several days of heavy downpours.

We speak with Monbiot, columnist at The Guardian. His book, “Out of the Wreckage: A New Politics for an Age of Crisis,” will be out this week.

Link to Story and 18-Minute Video

Unnatural Disaster: There Is No Such Thing As A ‘Natural’ Disaster

Last week’s edition of WNYC’s On The Media provides an excellent summary of Hurricane Harvey media coverage, placing it within the context of recent weather disasters like Hurricane Katrina and super storm Sandy: threadbare media disaster tropes; short-sighted corporate manipulation of the political process; the unwillingness of the media to view Houston within the arc of global climate breakdown and the fact that when it comes to the ravaging of a major metro area there really is no such thing as a “natural” disaster.

As a bonus there is an interesting closing segment analysis of just where the downward spiraling Trump administration and its republican party hostages are headed.