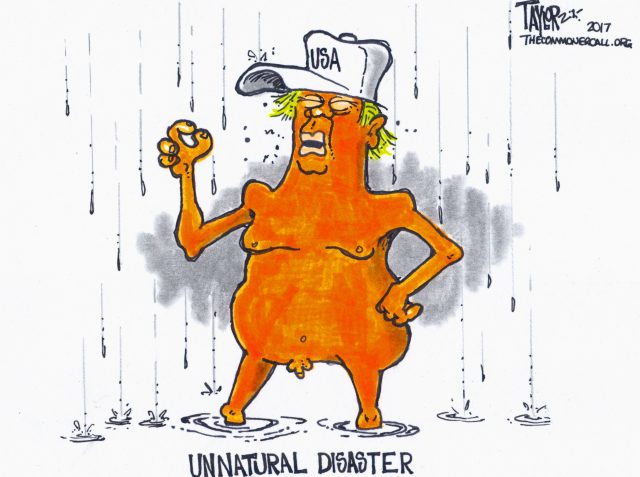 “Look into the soul of Donald Trump and you will see there is no soul.” – Keith Olbermann

President Donald Trump and first lady Melania Trump arrived in Texas Tuesday in the wake of Hurricane Harvey, which ripped through the Texas coast and triggered one of the worst floods in U.S. history, causing catastrophic damage to the greater Houston area and claiming at least 10 lives so far.

A visit to a disaster area is not the most appropriate time for product promotion, but here we are.

Trump arrived in Corpus Christi wearing the white “45/USA” hat that’s available for $40 on his own website, shop.donaldjtrump.com. This marks the third time in four days that the president has worn on-sale campaign merchandise during events related to Harvey, including two previous meetings for which the White House released photographs.  …

Please Donate To Relief Efforts For Our Fellow Citizens In Houston

The needs are many in the ongoing Hurricane Harvey disaster. Here is a link to a site where you can direct where you would like your contribution to go to.