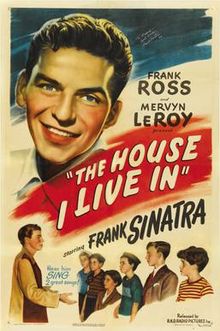 Unlike now, in the years immediately following WW II the government and Hollywood would speak out forcefully in the popular media against (some) forms of racism and prejudice. Following the war homegrown American fascists were pushing a lot of anti-Semitism. In the 1945 award-winning short film  The House I Live In Frank Sinatra was featured as the main character intervening with a gang of kids bullying a Jewish boy.

The film featured the song The House I Live In which was written by black-listed writer Abel Meeropol who wrote the lyrics under the pseudonym Lewis Allen, author of the anti-lynching song Strange Fruit, made famous by legendary singer Billie Holiday, who was hounded for years, right up to her death by the federal government. In 1957 Meeropol and his wife adopted the two boys of Julius and Ethel Rosenbrerg who were orphaned when their parents were executed in 1953.

The music was written by Earl Robinson, who had written campaign songs for FDR and Henry Wallace and was eventually blacklisted for being a member of the communist party. He eventually wrote a song for Jesse Jackson’s presidential campaign in 1984.

But the film was not without its faults. The film version of The House I Live In did not include Meeropol’s full original lyrics, omitting his lyric “my neighbors white and black”. When Meerolpol viewed the film the first time he walked out because of that omission.

Incomplete as it was, the film was, for its time, an aspirational celebration of the best of the American ideal of fairness and justice.

Frank Sinatra made The House I Live In part of his regular repertory of songs for years afterward, even singing it at the White House for a state dinner with Ronald Reagan and the opening of the Nixon Library. The song was covered by other artists, including  Paul Robeson,  Mahalia Jackson, Josh White, Sam Cooke and Kim Weston.

Given the current rising tide of hate and intolerance it is time for the song to make a comeback, in its original form.

In 2007 The House I Live In was selected for inclusion in the United States Film Registry by the Library of Congress as being “culturally, historically, or aesthetically significant”.

Thanks to Commoner Call reader Gary Ebben for forwarding the film.