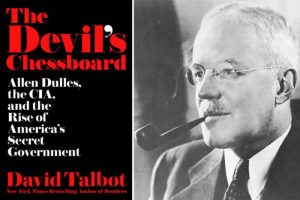 (Editor’s Note: David Talbot’s book on the role of the CIA in transforming our government into a branch office of Wall Street interests is an important book. This article will lead you to excerpts. I recommend the book highly to Commoner Call readers. – Mark L. Taylor)

Sixteen years later — just one month after the Kennedy assassination — Truman published a bombshell in The Washington Post: “I have never had any thought that when I set up the CIA that it would be injected into peacetime cloak-and-dagger operations… It has become an operational and at times a policy-making arm of Government… so removed from its intended role that it is being interpreted as a symbol of sinister and mysterious foreign intrigue.”

When it comes to behind-the-scenes intrigue, no one could out-sinister Allen Dulles, director of the CIA from 1953 to 1961. Dulles’s job, simply put, was to hijack the US government — for the benefit of the wealthy.

What he did, and how he did it, has never been more relevant, given the state of the nation in 2017. That’s why we are excerpting some revelatory chapters from David Talbot’s recent Dulles biography, “The Devil’s Chessboard.”

The focus here is on Dulles’s deeply troubling behavior around the time that John F. Kennedy was assassinated.

Although Kennedy had fired him in 1961, Dulles basically kept, de facto, running the CIA anyway. And, even more ominously, after Kennedy was killed in Dallas on Friday, November 22, 1963, Dulles moved into The Farm, a secret CIA facility in Virginia, where he remained for the weekend — during which time the “suspect,” Lee Harvey Oswald, was shot to death in a Dallas police station, and a vast machinery was set in motion to create the “lone gunman” myth that has dominated our history books to the present.

By no coincidence, that same machinery worked to bury evidence that Oswald himself had deep connections into US intelligence.

Throughout all this, one thing is clear: Dulles was no rogue operative. He was serving the interests of America’s corporate and war-making elites. And he went all out.

The “former” CIA director was so determined to control the JFK death-story spin, as Talbot chronicles below, that he even tried to strong-arm former president Truman, when the plain-spoken Missourian dropped hints that an out-of-control CIA might have been involved in Kennedy’s murder.

First part of a compressed Excerpt of Chapter 20, “For the Good of the Country” from The Devil’s Chessboard. Allen Dulles, the CIA, and the Rise of the American Secret Government. HarperCollins Publishers, 2015.