We live in a strange new political world, with a bigot in the White House on one hand and a swelling of the democratic socialist ranks on the other. How do we chart a path forward? One way is to learn from experienced leaders on the left, many of whom are putting their experiences out there as books.

One of those leaders is Senator Bernie Sanders of Vermont, whose Our Revolution is half recap of his run for the White House and half treatise on the issues he championed during that campaign. DSA members may not find much new in the anecdotes of capitalist abuses and examples of the policies Sanders espouses to address them, but they will find out why the message resonated so strongly during his campaign and how socialist activists can repurpose it to reach people who don’t think of themselves as “political.”

Sanders’s message struck a chord with people who said they hadn’t paid attention to politics until he showed up and spoke about crises in our country that mainstream candidates were ignoring and that people really cared about. That message hit home well before November 9, 2016, and sent hundreds of new members to DSA. After the presidential election, it drew thousands who now knew the words “democratic socialism.”

But don’t stop with Bernie. Another new book offers excellent guidance for amplifying the democratic socialist message. In Hegemony How-To, experienced activist and strategist Jonathan Matthew Smucker shares his experiences as an organizer and participant in movements such as Occupy Wall Street, MoveOn.org, and United for Peace and Justice. Smucker, who was raised in a religious community in Pennsylvania and is currently director of Beyond the Choir, became a radical while in high school, when he realized that the only way to achieve the goals of the Gospel was to immerse himself in the radical movement and fight for social and economic justice.

When lifelong Republicans start thanking socialists for raising important issues, you know the narrative is shifting.

Of the many valuable recommendations in Hegemony How-To, one of particular interest in the wake of the Sanders campaign is Smucker’s call for what he terms narrative insurgency. In contrast with narrative attack—that is, the kind of rhetoric that involves a direct assault on a person’s entire worldview, and that therefore usually fails to convince people to change their minds—Smucker’s approach is to begin by listening to others in an attempt to understand their values and concerns and then making the case for how your goals fit with those values and concerns. He suggests, for instance, that if you want to win converts to environmental activism in his hometown, you emphasize the biblical mandate to care for God’s creation.

Smucker’s technique sounds a lot like what grassroots activists such as Moumita Ahmed did while going door to door to drum up support for Bernie Sanders among working-class voters and voters in communities of color. Ahmed argued in the Spring 2017 issue of Democratic Left that instead of talking about the word “socialism,” we should be prepared to talk about people’s lived experiences and show how we’re on their side. Smucker puts it this way: “We don’t have to feign identification with the allied and neutral components within a community’s narrative or culture […] because our work for social justice is rooted in our love for real people, in all their complexity.” 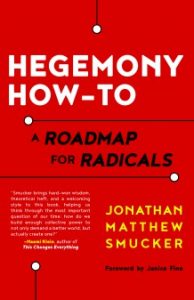 Smucker also talks about metanarratives—the grand philosophical stories that attempt to explain the world for everyone and that present particular interests as universal. For instance, the idea that the benefits of policies that favor corporations will trickle down to help everyone is a neoliberal metanarrative that was once widely accepted but has been fraying since the financial crisis of 2008.

Reading Our Revolution alongside Hegemony How-To brings to light these shifting narratives. The Sanders campaign didn’t create a whole new narrative, of course: Bernie ran with a narrative that had been fueled earlier by Occupy Wall Street’s meme of the 99%. Bernie rightfully complains in his book that the media generally failed to report the content of his message, instead focusing only on the contest between him and Hillary Clinton.

But he refused to be distracted and hammered away at his message. Against the advice of professional political consultants (who preferred sound bites) he spoke in detail about the reasons for the crises people are facing and his proposals to address them. And people responded. Sanders highlights a favorite comment from the campaign: “Thank you, Bernie. You treat us as if we were intelligent human beings.”

People open to a new message

Our Revolution explains that most of the people who flocked to his campaign were not the usual suspects, faithful to the Democratic Party. They were newly engaged because someone was finally speaking to the realities of their lives. DSA’s work to establish chapters in all fifty states, no matter how red they may look, is in line with the wisdom of Sanders and Smucker, who both urge us not to forget that there are people out there who are open to a new message.

In fact, our real problem, Smucker argues, is not that people disagree with us: it’s that they don’t believe we can be effective. The surprisingly positive response to Bernie’s campaign, even as it exposes the obstacles we face, has given us a platform to show that we can make our concerns heard, and that we’re therefore worth the time of all those potential allies who are reluctant to engage in futile organizing efforts.

There’s a review of Our Revolution on Amazon.com that shows the value in Smucker’s advice to reach out to new communities. The reviewer, Mike M, posting in March 2017, doesn’t agree with Sanders’s proposals, but is glad to see the issues raised:

“As a Christ-following, life-long Republican and business owner, I would likely be in the demographic of the least likely to recommend this book or to embrace any of Bernie Sanders’ policies, but I found this book to be challenging at a personal level. […] My own small business struggles with the rising costs of health insurance, my own kids struggle with the ongoing burden of student loans, even while they succeed in their careers. And I have to agree that the present trajectory of making it easier for the wealthy (individuals and corporations) to escape taxes and thereby a responsibility to society, is not right. I did not become a progressive or a socialist as a result of reading this book. . . but I agree fully that what he raises are certainly the issues that campaigns and our government should be focused on . . . . I strongly urge you to read this book.”

When lifelong Republicans start thanking socialists for raising important issues, you know the narrative is shifting. And judging from DSA’s swelling ranks, this is only the beginning.

Jessie Mannisto is a writer and librarian from Detroit who now lives in Washington, DC, where she is the chair of the Metro DC DSA political education committee.

This article originally appeared in the Summer 2017 issue of Democratic Left magazine.