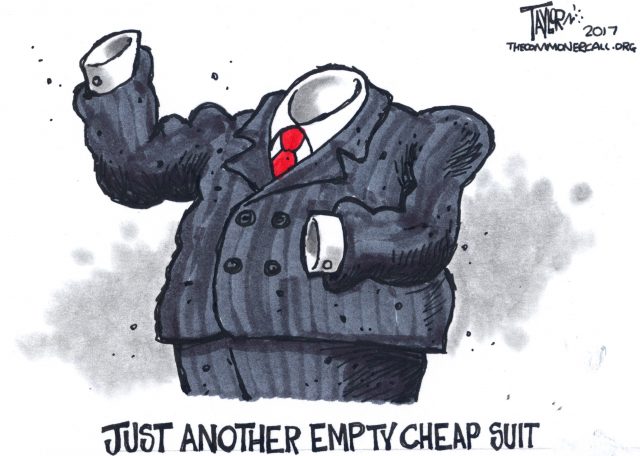 So much for marketing. First reviews on Wall Street hedge funder Anthony Scaramucci, the beleaguered Popular Loser’s swaggering, sweet-talking, snappy-dressing, obsequious new White House Communications Director, are less than stellar. Having decided his problem is just poor messaging – not that he’s an awful human being ineptly struggling to advance a cruel, stupid, politically regressive agenda – Drumpf, a sleazy salesman, has brought in another sleazy salesman. “The Mooch”– does he belong in “Good Fellas” or what? – is “a wealthy mini-me Manhattan bro with a wolfy smile and slick coif who will say anything and flip any position,” a self-promoting sycophant with “the same fluid relationship with the truth” as Lying Donnie. Even the Wall Street Journal calls Scaramucci, fired from Goldman Sachs, a “diva” who has made his way through “self-promotion, well-timed bets, and a knack for surviving failure and gaffes.”

“A used car salesman trying to sell us all a Ferrari with no VIN number and a weird stain in the trunk.”

He’ll need that skill set in his new gig. Despite his delirious praise for his new boss – who has “some of the best political instincts in the world” and who he loves, loves, loves to the moon – the consensus is that The Mooch already sucks at his job. Sunday, his first day on the airwaves, CNN’s Jake Tapper destroyed Scaramucci as he blithely questioned that whole Russia thing and then, unasked, hilariously outed his boss as the anonymous source who agrees. One observer’s version: “Mooch: I’m not going to tell you who said this. Tapper: Who said this? Mooch: THE PRESIDENT OKAY?” Mooch went on to defend Drumpf’s alleged, widely condemned talk of pardoning himself even as Donnie’s lawyer, on another channel, denied any such talk.

Those early gaffes, combined with his greasy, empty-suit, over-the-top style while trying to defend the indefensible, have sparked a savage response on social media, which is made for such things. The Mooch has earned his own air-kissing emoji, been likened to the banal, execu-speaking, 80s-era “That Guy” on Futurama – In his new job: “Now, the first order of business is to blame everything on the guy before me” – and generally deemed what one astute Twitter-user calls “a used car salesman trying to sell us all a Ferrari with no VIN number and a weird stain in the trunk.”

Twitter has, in fact, more than risen to this particular demented occasion. Its crowning achievement came in response to the Mooch’s lamentable post of a quote – “Dance like no one is watching. Sing like no one is listening. Love like you’ve never been hurt and live like its heaven on earth” – he attributed to Mark Twain. Uh, no, said the denizens of Twitter, who then gleefully went to work. “Don’t want to close my eyes, Don’t want to fall asleep, ’cause I’d miss you baby, and I don’t want to miss a thing” – John Locke.” “Who let the dogs out – Aristotle.” “If you change your mind, I’m the first in line, Honey I’m still free, Take a chance on me – Confucius.” “Cash me outside, how bow dah? – Ralph Waldo Emerson.” And our favorite: “Na na na na na na na nana Na na na na nana Gettin jiggy wit it – Nelson Mandela.” It was the best of times, it was the worst of times, it was the most gotta-laugh-or-cry times, ever – Me.

Link to Story and 9+-Minute Video