First, a note on a domestic issue that affects everyone of us: Health Care – Urgent and Important.

Russia put forward a great effort to influence our election. There are so MANY ties between the Russians, their influence and the Trump administration and new ones keep spilling out daily. The topic is BROAD and DEEP. Health care by comparison is easier in the sense that at any point in time, there is proposed legislation that is bad for us and we should do what we can to Resist! Watergate took years, investigations leading to Clinton’s impeachment took years. Russiagate won’t take years but it will take time. Both are important and we must – and can – stay active on both.

I read a comment this morning in a Washington Post article about Youngstown, Ohio and a gentleman said, “It has been six months, and I haven’t seen anything yet. I don’t think anything more is going to come out.” Okay, that’s a fair extrapolation – voices were ignored prior to our election, but at the right time those voices will be heard.

Russiagate underscores the risks we face with Fair Elections and our foundation of democracy. We presume to limit foreign involvement and collusion – and we want protections for Fair Voting.

Our government owes us a complete explanation and proper action to avoid problems in the future. It’s time for Country ahead of Party.

Here’s a comparison of leadership:

FDR: “The only thing we have to fear is fear itself.”

DJT: “Can I pardon myself?”

Trump’s dark threats of chaos are linked to Mueller’s investigation of Trump business and Russia.

Trump Can’t Kill the Russia Investigation: Even if he fires Sessions and Mueller, the case will go on.

The news has daily coverage of Trump’s criticism of his “beleagured” attorney general, Jeffrey Beauregard Sessions III. Trump is clear, his motivation for humiliating Sessions is because Sessions rightly and correctly recused himself from actions related to Russia because of his role and participation in the campaign. Nonetheless, Trump’s goal is to replace Sessions, and fire special counsel Robert Mueller.

Already this week, President Trump has gone after Sessions several times, on Twitter, and continued his attack on Mueller’s Russia investigation. The crucial question now is whether Trump will get rid of Sessions and then try to have Mueller removed as special prosecutor.

But take heart, as the Slate article linked above explains, Trump cannot just call an end Mueller’s investigation. If he tries he can create a crisis but will hurt himself in the process. The author turns to Tim Weiner, Pulitzer awarded historian for insight.

‘Tim Weiner: The law under which Bobby Mueller is operating means that only the person that appointed him, Rod Rosenstein from Justice, can fire him. If Trump wants to get rid of Bobby Mueller, it will be the Saturday Night Massacre squared.

Late in the article Weiner is pushed to lay out a ‘best case’ attack by Trump against the investigation:

“You were very justly persistent in your line of questioning yesterday, and I see today through Trump’s tweetstorm where your line might work. I realize we are in a bizarro world. I don’t think this is going to happen but I don’t have a crystal ball: Trump fires Sessions, Rosenstein resigns in protest or gets fired. Right now it’s Saturday Night Massacre 2.0, OK? Trump then installs as attorney general and deputy attorney general useful idiots who will do his will. The removal of Sessions, who has recused himself to Trump’s great irritation, and Rosenstein, creates a new command structure at Justice. Useful Idiot No. 1 and Useful Idiot No. 2 have been vetted for Trump and given him loyalty oaths that they will fire Mueller upon command.”

“…Well, this is only a theoretical construct under which Mueller could be removed, which would impede, delay, and otherwise obstruct the criminal case. The FBI would take up the case, and the particular case of obstruction of justice would have another count added to it. It would not be substantially impeded.”

The author and Weiner conclude that Trump can create political chaos, impede and delay the investigation, but cannot END the investigation and would only strengthen a case of obstruction of justice against himself.

The first step in a Trump effort to end the Russia investigation, per the Slate article, is the replacement of AG Sessions. Dems have other ideas:

“Let me state for the record now, before this scheme gains wings, Democrats will never go along with the recess appointment if that situation arises,” Senate Minority Leader Charles Schumer (D-N.Y.) said Tuesday, amid speculation about Sessions’s future in the administration.

He added that Democrats “have some tools in our toolbox” to block Trump from a recess appointment, which would allow the president to bypass what would likely be a contentious confirmation fight.

As millions of American families wonder whether they will still have healtth insurance or not, senate republicans connive behind closed doors to bend and twist the legislative process to throttle the Afffordable Care Act ahead of a Senate recess. In the background a battle brews to impede or block a replacement of Sessions:

“Democrats could prevent the Senate from adjourning in mid-August, which could force Republicans to set up “pro-forma” sessions that would effectively block Trump from being able to name a successor without Senate confirmation.”

We shall see what if anything happens.

You’ve got to be kidding! If there are two things we’ve learned with the Trump administration and Russia:

Everyone has a link to Russia, and,

“No Russia meetings” is now “I have another meeting to disclose (and one scheduled next Tuesday at 3 p.m.)”

Brian A. Benczkowski, President Trump’s nominee to lead the Justice Department’s criminal division, told senators Tuesday that he once represented a Russian bank that was alleged to have a Trump Organization connection, but he cast that representation as a routine part of his legal work and forcefully asserted that he would be an independent and fair-minded law enforcement official.

First, a little background: Alfa Bank – not just any Russian Bank. Alfa Bank is the state-owned Russian bank that had server communication between the bank, Trump Tower and Spectrum Health (DeVos company, Betsy DeVos is now secretary of education).

Benczkowski said he was asked by a partner in his law firm, Kirkland & Ellis, to help represent Alfa Bank, which wanted to conduct an internal investigation of the server communications. Benczkowski said he hired and oversaw a digital forensics firm, Stroz Friedberg, to examine computer traffic that came on the bank’s systems in February and March, with an eye on ultimately taking the findings to the FBI and Justice Department.

Benchzkowski said he would recuse himself if necessary, but also defended himself:

Heading the Justice Department criminal division is an important and coveted appointment. Robert Mueller once held this position. Yet in the realm of all possible candidates – Trump and Sessions put forward a candidate – well, he would recuse himself when appropriate.

Jared Kushner met with the Senate intelligence committee on Monday in a closed session. Kushner did manage to remember another Russian meeting that to date he managed to overlook in spite of the huge amount of attention given the subject.

Most important, maybe personal ignorance is not a great defense:

“But in his presentation to members of the Senate intelligence committee, the 36-year-old husband of Ivanka Trump might have dug himself deeper into a hole by leaning so heavily on personal ignorance as the core of his defense. By doing so he raised a slew of new questions about how the US president could have entrusted someone with such little foreign policy ballast with a powerful international portfolio.”

Kushner’s defense is that he was in over his head. But there is a trove of legal analysis of what he said and what he didn’t say in his attempt to assure all that he has not mixed his private business with his role in the Trump administration – the contradictions are many and the summary judgment of this reporter is:

“If the Kushner family has had zero financial dealings with the Russians or Russian banks, and are willing to open up their books to prove it, then maybe Jared Kushner will be able to put all this to rest,” said Richard Painter, chief White House ethics lawyer under George W Bush.

“But until that happens we have to assume there’s a strong likelihood that when a prominent Russian banker goes to see a prominent member of the Trump transition team, finances will have been part of their discussion.”

“I don’t take meetings without knowing what they are and I’m a suburban divorced woman who works part-time in a jewelry store.” – Marty Hagerty, via Facebook

Media does a great job with headline commentary… 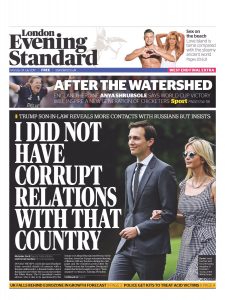 Here is some history of Bill Browder, Sergei Magnitsky, Hermitage Capital Management and the resultant Magnitsky Act (sanctions against Russia); this is Browder’s written remarks to the Senate Judiciary committee in advance of his appearance set for Thursday morning at 9 AM ET.