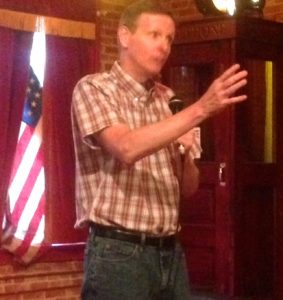 “We gotta be there for each other and help each other in restoring a political culture we can be proud of.”

Mike McCabe grew up on a small family dairy farm along a gravel road in rural Clark County, Wisconsin. That experience formed his view of the world in many ways. As a youth he participated in two barn raisings for neighbors. One had lost their barn to fire and another to a tornado.

“I saw people from miles around come to build those barns in a day,” McCabe recalls. But there was one act of community support in particular that stands out in McCabe’s memory that set the model for his life’s work.

It occurred in the middle of a particularly wet, rainy harvest and all the McCabe family machinery got bogged down in the muddy fields. That is when a neighbor, Les Sturz, came rumbling down the road with a much larger tractor to pull the family’s equipment through the mucky fields to complete the harvest. That act of neighborly generosity and care was made all the more significant by the fact that just a few weeks before Les’s father had hung himself after learning the banker was foreclosing on the farm that had been in the family for generations.

Shortly after Les came to the aid of the McCabes the bank followed through and took the farm from Les.

That act of generosity in the face of family tragedy has shaped not only McCabe’s past work exposing corruption but formed his vision for the upcoming campaign that will take place against the background of corruption and greed not seen since the venality of the Gilded Age when lumber barons and the railroads owned state government.

“That is what Wisconsin can be; looking out for each other,” McCabe said of Les’s example. “We gotta be there for each other and help each other in restoring a political culture we can be proud of.”

As McCabe noted to his enthusiastic supporters, we need to change state government from one that works really, really swell for a few thousand wealthy people and a handful of corporations sucking up our public resources and tax money to one that works for the state’s five million citizens.

“I know they like to call it ‘trickle down’ economics but I call it ‘golden shower’ economics,” MCabe said.

There needs to be, he argues, a change in the very soul of Wisconsin’s tawdy and deeply corrupted politics.

In the tradition of Wisconsin progressives

Not since Robert M. La Follette Sr. delivered fiery campaign speeches against the banksters and corrupt pols from the back of buck board farm wagons in the earliest days of the 20th century has there been a Wisconsin voice as unabashedly opposed to the perverting powers of corporate special interests as reformer Mike McCabe. As former director of the Wisconsin Democracy Campaign McCabe spent a couple decades tracking the grubby paw prints and slimy foot steps of corporate corruption through state politics. In 2015 he left WDC and wrote Blue Jeans In High Places: The Coming Makeover of American Politics that not only documented the tragedy of corporate corruption but offered a way back to more representative government for those of us who have been orphaned by both parties and left, as McCabe describes “politically homeless”.

On Tuesday evening McCabe brought his message of reform to the Grand Ball Room in downtown La Crosse along with a special message: he will be running for the democratic party nomination for governor. The official announcement will come September 12. About 80 people attended the event, which was organized by a rapidly growing group of area supporters.

(AUTHOR DISCLAIMER: Before going forward with details of McCabe’s message Commoner Call readers need to know that I have volunteered as an unpaid adviser to the McCabe campaign and will be donating to the campaign. I have often written positively of his work in the past. I have long been a fan of McCabe’s important work and in 2015 filmed and produced several short videos for McCabe’s nonprofit public interest group Blue Jean Nation. That work was done as a donation and no money was paid for the work; I paid for all production expenses out of my pocket. I have felt McCabe’s assessment, position and proposals on what ailes Wisconsin – and the nation – is spot on and have been happy to support his efforts.)

McCabe’s agenda is full. From bringing about a public-private program to bring high speed internet and cell phone service to “every door step in Wisconsin” to affordable debt-free college education, McCabe’s is a solidly progressive message. The state’s Badgercare program, he notes needs to be expanded to ‘Badgercare for all badgers’, including, McCabe proposed, for every legislator. If that were to happen, he observed, watch how fast Badgercare would improve.

“You cannot beat Walker with money and not by hating Walker. You have to be for something. …That is the path for beating Walker. Walker can be beaten.”

McCabe called for the protection of our public resources – the land and water we depend upon. At a time we see streams and small lakes going dry because of high-capacity wells sucking up community water aquifers for corporate profit, local governments need to retake the local control the Republican legislature and governor have seized in recent years. In Kewaunee County, McCabe noted, one-third of private water wells are now contaminated by cow manure from the corporate factory farms and even with expensive reverse osmosis purification systems water comes out of the tap the color of tea.

“Every one of those laws need to be repealed,” McCabe declared. “What government does must be for the whole of society, not fragments and scattered constituencies.”

Education is the key to freedom for without a solid education our children are not free to grow into their full potential. Without a well educated population properly prepared to work productively the state is not free to develop its collective potential. In Wisconsin we now pay more for prisons than we do for education, which means, McCabe said, “We are paying more for failure because we are paying less for success.”

McCabe supports the elimination of tax payer support for the private and often for-profit corporate voucher school system. The long-promisesd improved performance, educational reform and innovation of vouchers have never materialized as more and more precious resources are drained away from our children into often failed private ventures and corporate profit. Given the challenges facing our children and state in this century, McCabe said, “We cannot afford two separate systems of education.”

Expect to hear the state establishment of both parties whine and whinny that McCabe’s ideas are pie-in-the-sky unaffordable. Hogwash, McCabe noted, rattling off a list of ways to fund a decent state to meet the needs of the many and not the few.

“The wealthiest one percent in Wisconsin pays the overall lowest tax rate,” McCabe noted, adding that the supposed Wisconsin Economic Development Corporation has chugged down millions of public funds and has made the state dead last in the nation in new business start-ups.

“It’s a train wreck of an agency,” McCabe noted. It’s also a source of millions for programs that work.

Trust me, McCabe’s road will be hard. He has no illusions about the opposition that will line up in both parties. The big money and lobbyist-backed private interests of the duopoly will throw up obstacles and troll the campaign. In the earliest stages expect the most vicious attacks from the democratic party establishment. In the general election the incumbent will have all the money the Koch brothers can leaf-blow into the state. You could raise $60 million and the Koch brothers and their corporate pals will lard up the opposition with $80 million. No, money will not win the race for the people.

“This race boils down to two words,” McCabe said. “Brave and positive.”

“The democrats need to look for their David, not their Goliath,” McCabe said. “If it is only about money, we lose; beaten to a pulp. You cannot beat Walker with money and not by hating Walker. You have to be for something. …That is the path for beating Walker. Walker can be beaten.”

I know, I know – what a novel idea; to actually have a campaign about something. To be able to vote FOR and not AGAINST. Remember what it use to feel like to actually vote for a candidate? Just as with every recent campaign we have endured in the past decade, the traditional desiccated, focus-group groped democratic campaign formula will not win. The current Lord of the Governor’s mansion (which McCabe says he will not move into, BTW) is just hoping for a regular Democratic Party of Wisconsin trade marked opponent. Well guess what – happy days are here again.

Let us not forget, the vastly outspent Bernie Sanders won 71 of the 72 counties in Wisconsin’s primary with a solidly anti-establishment progressive message.

(Authorized and paid for by Mark L. Taylor, Genoa, WI., and not a campaign committee.)