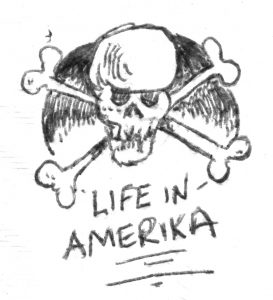 “It isn’t in poor taste, and it isn’t political opportunism—it’s the goddamn point.”

That’s what Jon Pavlovitz, a pastor from North Carolina, writes regarding the importance of talking about the recently-announced cancer diagnosis of Sen. John McCain (R-Ariz.)—which he calls “tragic” and “horrific”—in the midst of a raging national debate over healthcare.

On Thursday, McCain’s doctors confirmed the 80-year-old senator and former presidential nominee had been diagnosed with an aggressive and malignant form of brain cancer. In the wake of the news there was an outpouring of support and well-wishes from across the political spectrum aimed at the senator and his family.

With the Republicans still aiming to ram some version of their Trumpcare proposal through the Senate this week—and as the popular opposition vows vigilance to thwart those efforts—Pavlovitz argues its disingenuous for people to argue that McCain’s illness should be off limits politically.

Privilege and status exposes the inequality and shortcomings of a healthcare system that works for the haves, but not for the have nots.

“The personal hell that John McCain and his loved ones are walking through right now is the point of it all,” the pastor wrote Thursday in a blog post that started to go viral over the weekend. “These moments are precisely what we’re talking about, arguing about, screaming about: The atomic bomb of grief that gets dropped on your family when you get the test results and your planet is altered forever.”

While acknowledging that McCain is one of the nation’s most recognizable political names and someone who holds a powerful position, Pavlovitz explains why his privilege and status exposes the inequality and shortcomings of a healthcare system that works for the haves, but not for the have nots.

John McCain deserves life. He deserves to have every available resource exhausted to try and make him well. His family deserves this. His wife and his children deserve it. The people who treasure him deserve it. They deserve it, not because he’s wealthy or known or “important”—but simply because he’s loved by someone who wants more time with him. That’s enough for me. Every human being deserves this. Every spouse and every child and every treasured person.

Universal healthcare is something we need to talk about now, because Cancer is an equal-opportunity bastard who cannot be defeated without help; because life-threatening illness is a bully that knocks the hell out of you and those who care about you, because we are all terrified of dying and want to know that we won’t be left alone if the shit hits the fan.

I want John McCain to live. I want him to get to spend more time with those who would grieve his loss in ways I’ll never understand. But I want this for you too. I want it for your father and your children and your friends. I want it for those I love. I want it for people I agree with and people I don’t.

We should be for one another. We should fight for each other’s life with all that we have.

In a letter published in the Los Angeles Times on Sunday, reader Ed Sinderman stated: “I hope there’s a realization that if McCain had not been a privileged senator of the United States, he may have not had the proper medical attention that resulted in this unfortunate diagnosis and best possible outcome, whatever that may be.  I do not intend to make a political issue out of McCain’s health, but his party needs to understand that its policies treat the lives of people like the senator much differently from less fortunate American citizens.”

While the national debate continues, and as Republican Majority Leader Mitch McConnell makes “a last-ditch” attempt to navigate the minefield within his own party to get a bill through the Senate, a look at low-income Americans desperately lining up and waiting for hours to receive the most basic care provides a sharp indictment of a for-profit system that increasing numbers of people realize is both inhumane and beyond repair.

Health care in a horse stall

In recent days, a temporary free medical clinic set up in rural Virginia offered a brutal reminder about how people without access to health insurance or regular care remain victims to a healthcare system that leaves tens of millions Americans left out. As the Washington Post reported:

No relief is in sight for someone like Larry McKnight, who sat in a horse stall at the Wise County Fairgrounds having his shoulder examined. He was among more than a thousand people attending the area’s 18th annual Remote Area Medical clinic, where physicians and dentists dispense free care to those who otherwise have none.

“I really think that they don’t have any clue what’s going on,” McKnight said of political leaders in Washington. “You watch the news and it’s two sides pitted against each other, which in turn just makes them pitted against us, the normal person.”

Dr. Paula Hill, clinical director of the Central Appalachia Health Wagon, which organizes the event, explained to the local Bristol Herald Courier that the health care provided at the RAM clinic is vital to those it serves.  “These people need help,” Hill said. “There are people out there that work every day that do not have access to vision and dental care, even if they have insurance.”

Late Saturday night, Sen. Bernie Sanders (I-Vt.) shared the Post‘s article on the free clinic to his Facebook page and added this commentary:

No. This is not some poor third world country where over one thousand people lined up in a field for emergency health care. This is Virginia, the United States of America, the wealthiest nation in the history of the world. But it’s not just Virginia. It’s every state in the nation. Today, in the United States, some 28 million people have no health insurance while even more are under-insured with high deductibles, high co-payments and high prescription drug costs. Unbelievably, the Republicans are not content with this disgraceful situation. They want to make it even worse by throwing another 22 million people off of the health insurance they currently have. Our answer: in a democratic civilized society, health care must be a right of all, not a privilege. We need a Medicare for All single payer program.

And so, as Pavlovitz argues, talking about healthcare in the wake of the “terrible news” about Sen. McCain is not “disrespectful” or off the mark.