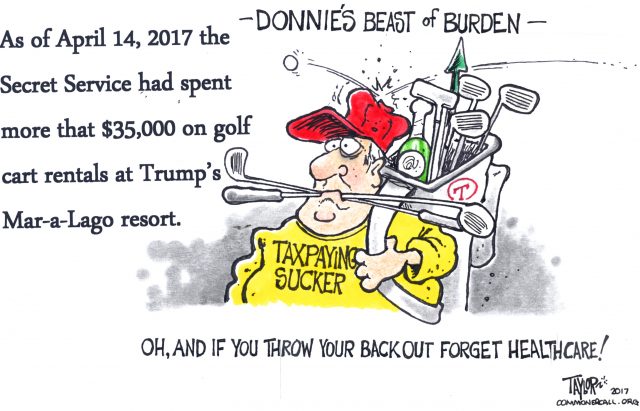 The Secret Service has spent more than $35,000 on golf cart rentals at President Trump’s Mar-a-Lago resort since his inauguration, CBS News reported Friday, as Trump begins another weekend in Florida.

The president has played several rounds of golf at Trump-branded clubs, including in Florida and Virginia.

Trump has come under fire for his frequent trips, which current estimates show have cost more than $20 million — nearly the amount President Obama spent on travel in his first two years combined. Obama spent approximately $97 million on travel, averaging $12.12 million per year in office.

CBS’ new report comes as Trump spends the full three-day Easter weekend at Mar-a-Lago. No senior staff took the Air Force One flight to Florida, according to a report.

With their mulit-layered, intersecting business operations, multiple weekend getaways and family sense of insatiable entitlement, the beleaguered US taxpayer has been shelling out for all kinds of frills for Donald Trump and his children. Here are just a few examples to keep in mind as the republicans chatter on about cutting Medicaid, Medicare, school budgets and environmental protection programs…

Each round-trip weekend excursion to Trump’s Mar-a-Lago resort on Air Force one costs American taxpayers $700,000. Total taxpayer tab for each weekend visit comes to $3 million. Of the first 83 days in office, Trump was at Mar-a-Lago 21. If Trump were to keep up that pace for two terms the cost to taxpayers would be over $800 million for Mar-a-Lago alone.

The Secret Service paid out $12,000 for tents and portable toilets for Trump’s Mar-a-Lago Super Bowl weekend.

A family business trip to Uruguay in January by Eric Trump cost taxpayers about $100,000.

A month later another the Secret Service spent another $53,000 when Trump and his two sons attended a family business event in Vancouver, British Columbia.

First daughter Tiffany and her boyfriend recently vacationed in Berlin racking up $22,439 in Secret Service expenses.

An Aspen ski weekend family getaway for Ivanka Trump, husband Jared and their children included 100 Secret Service agents and $65,000 in government expense. Included in that was $6,884 in ski lift passes for security and $12,208 for ski equipment rental for the security detail.

The defense Department pays out $130,00 a month to rent a 3,500-square foot space for the White House Military Outpost in Trump Tower. The space is owned by someone outside the Trump family. The price the government is paying is over twice the $60,000 per month rate for the highest rental in the building.

A purchase order showed a charge of $64,000 for “Elevator services” in Trump Tower in December 2016.

The Secret Service has asked the office of Management and Budget for an additional $60 million in the next year to meet the expenses of covering the Trump family. That would be on top of the 2017 budget of $734 million. There were additional undisclosed expenses related to equipment and security upgrades at Trump Tower.

Congress set aside $60 million for “extraordinary law enforcement personnel costs” associated with protecting Mr. Trump’s residences since Election Day. The additional spending was only for this  fiscal year.