A day after the Republican party’s effort to repeal and replace the Affordable Care Act crumbled, Al Gore spoke at a community college in Manhattan, NY, about his new climate change movie. Completely unrelated to the documentary, however, Gore expressed his support for a single-payer healthcare system.

“The private sector has not shown any ability to provide good, affordable health care for all. I believe we ought to have single-payer health care,” Gore said at the event hosted by The New York Times.

“The private sector has not shown any ability to provide good, affordable health care for all. I believe we ought to have single-payer health care.”

As the GOP struggles — despite its Senate and House majority — to come to a consensus on an adequate bill to replace the ACA, some Democrats have gradually moved left and embraced a “Medicare for All” solution. Sen. Bernie Sanders campaigned on the platform and said he would introduce a single-payer bill when the GOP failed to repeal the ACA (he said this in early July).

Democratic Senators are also joining Sanders in endorsing single-payer. Sen. Elizabeth Warren said “the next step” was single-payer in June. Sen. Kristin Gillibrand has expressed support for single-payer and Sen. Kamala Harris offered a measured backing of the solution. …

We Are The Leaders We Need: From Now On, Single Payer Health Care Must Be A Deal Breaking Litmus Test For Democrats 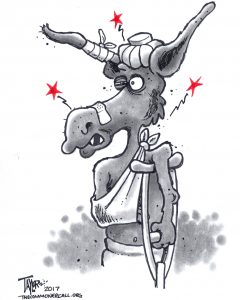 I am so tired of hearing people say they don’t support litmus tests. If you can’t judge candidates by their positions on issues, then how do you know who to vote for? Too many people supported George W. Bush because he was a “good Christian man.” George Will is a great guy at a baseball game, but I disagree with him on the issues, and it is those disagreements that will cause me to not vote for him.

Healthcare is important to me, and if a candidate does not support single payer healthcare, they will not get my vote. I am not a single-issue voter; healthcare is not the only issue I care about. It is, however, a deal breaker.

I do not have time or money for any politician who does not support single payer healthcare. I don’t want to hear anyone say all we have to do is tinker with Obamacare. I do not support the current repeal efforts, only because they are not replacing it with single payer or a step in that direction.

I am working, paying for health insurance, and the current system is failing me. My insurer would rather pay for dialysis three times a week than pay for a kidney transplant. The private insurance system is not sustainable without allowing them to deny treatments. That is what Trumpcare would do. Young, healthy people would pay less for health insurance while older Americans would pay more and receive less. …

Listen Up, Democrats: Get On Board With Medicare For All Or Go Home

Amid surging support for Medicare for All at the grassroots—which can be seen both in recent polls and at anti-Trumpcare protests, where demonstrators have brandished signs declaring “healthcare is a human right”—activists, physicians, and policy experts are imploring Democratic lawmakers to either get on board with the growing majority of their constituents, or go home.

This coming Monday, July 24 [Today.], activists across the country are set to target Democratic lawmakers who have yet to sign off on Rep John Conyers’ Medicare for All legislation. The nationwide events, coordinated by the group Millions March for Medicare 4 All, are part of a growing call “for America to do for its citizens what literally every other developed nation in the world has had for decades.”

“The size of one’s bank account should never be the determining factor in whether one gets medical care,” said Beverly Cowling, the organization’s co-founder. “This is the 21st century, not the Dark Ages, and we will not stop until every American has access.”

Responding to politicians and commentators who argue that incremental improvements to Obamacare and the implementation of a public option are the most practical steps toward universal coverage, Dr. Carol Paris, president of Physicians for a National Health Program, said in an interview on Democracy Now! that such steps amount to “creating another opportunity for the insurance companies…to put all the sickest people in the public option and keep all the healthiest young people in their plans.”

“We’re not going to wait around for our members of Congress to say, ‘Now it’s politically feasible.’ If we wait for that, we’re going to be waiting for the rest of my life, your life, and many more lives.”

“We really need to go forward now to a national, improved Medicare for All,” Paris concluded. “And really, the bill in Congress, H.R. 676, Congressman Conyers’s bill, is the way we need to go.”

Far from being a step on the path to universal healthcare, the public option “could undermine the movement for single-payer, discrediting a fully publicly financed system that is not a feeble adjunct to the private insurance market,” DeMoro wrote.

“The Congressional Budget Office in 2013 concluded that adding a public option would not even slice the number of uninsured, and could even encourage employers to dump workers they now cover into the ACA exchanges. With millions still either uninsured or paying exorbitant costs for care, imagine promoting a publicly financed Medicare for all to a public that sees a public option that is just as unethical as the notorious private insurers, or a financial wreck that just went belly up.”

Analysts tracking public opinion on healthcare have been startled by the speed with which the debate over Trumpcare has shifted popular attitudes to the left, in the direction of Medicare for All.

As Common Dreams reported on Thursday, 62 percent of Americans—and 80 percent of Democratic voters—now believe it is “the federal government’s responsibility to make sure that all Americans have healthcare coverage.”

Indeed, as Max Fine, one of the architects of Medicare, told The Intercept‘s Zaid Jilani recently, the original intent of the program’s creators was to expand it to everyone. Medicare for all, Fine concluded, “is only real answer” to our current healthcare woes.

The job of single-payer proponents now, Dr. Paris emphasized, is to make it politically damaging for Democrats who refuse to listen to their constituents and instead remain committed to a failed for-profit system, under which millions remain uninsured.

“We’re not going to wait around for our members of Congress to say, ‘Now it’s politically feasible.’ If we wait for that, we’re going to be waiting for the rest of my life, your life, and many more lives,” Paris said.

To translate popular attitudes into public policy, Paris said, “it’s going to take a movement of movements, and it’s going to take the American people making it toxic for our elected officials not to get on board with this.”

On Tuesday, a coalition of dozens of progressive organizations announced the launch of a new initiative called “The Summer of Progress” with the goal of pressuring House Democrats to support, among other legislation, Conyers’ H.R. 676.