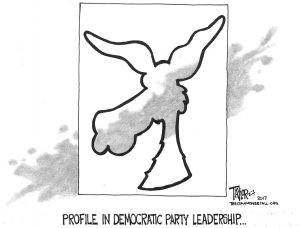 Writing in Politico, Bruce Bartlett complains the Republican Party has lost its way because it has ceased to champion ideas; he says the GOP has become the Party that panders “to the lowest common denominator in American politics.” What Bartlett says is true, but the Democratic Party has also lost its way. Not because its ceased to champion ideas but rather because Democrats have forgotten who they are, they’ve lost touch with their soul.

Bruce Bartlett is a historian who served in the Reagan and George H.W. Bush Administrations. His Politico article savages Trump: “He has instituted policies so right wing they make Ronald Reagan… look like a liberal Democrat… Trump is what happens when a political party abandons ideas, demonizes intellectuals, degrades politics and simply pursues power for the sake of power.”

Bartlett dates the GOP decline to the 1994 ascension of Newt Gingrich: “In power, Republicans decided they didn’t need any more research or analysis; they had their agenda, and just needed to get it extended.” But there’s another equally viable explanation: Republicans came under the control of a small number of billionaire conservatives, such as Charles and David Koch and Robert Mercer. After Gingrich came to power, new conservative initiatives originated not from GOP congress members but instead from conservative think tanks (such as the American Legislative Exchange Council [ALEC]) funded by the billionaires.

Not so long ago, Democrats distinguished themselves as “the Party with a soul.” That’s what they need to do now.

Over the course of two decades, the Republican Party became the Oligarchy Party. It didn’t abandon ideas but rather turned the conservative intellectual process over to a small number of billionaires. Republican congress members became tools of the oligarchs. Inevitably, this produced the situation where Donald Trump cut his biggest deal; Donald became President of the United States after agreeing to let the oligarchs guide his domestic and foreign policy after accepting millions in financial support.

Democrats have not responded effectively to this change.

The rise of the oligarchs has had two direct impacts on the American political process: first, it has savagely increased the impact of big money. Elected officials now have to spend a huge percentage of their time raising money for the next election. Over time this has vastly increased the impact of big donors and lobbyists. The Republican Party is now run by oligarchs but, to a worrisome extent, the Democratic Party is also influenced by big money.

When Bernie Sanders and Elizabeth Warren talk about the political system being “broken” or “rigged” this is what they are talking about. Wealthy Americans have too much influence in the political process. Democrats acknowledge this but they haven’t done anything about it.

The second impact of the rise of the oligarchs has been the increase of partisanship in American politics — the death of “comity.” The current debate about “Trumpcare” is emblematic of this situation: in 2009, when the Affordable Care Act was being discussed, Democrats had lengthy discussions with Republicans and incorporated many of their ideas in the legislation (even though most Republicans ended up not voting for the Affordable Care Act). In 2017, when Trumpcare was being discussed, Republican Senators made no effort to consult Democrats.

Even though Hillary Clinton was widely believed to be the most qualified candidate to ever run for President, she wasn’t popular. Voters didn’t have the visceral sense of attachment to her that eight years before they had had with Barack Obama. There are a lot of reasons why voters didn’t like Hillary: the fact that she is a woman; her reputation as an intellectual; the email scandal; and on and on. But if we compare Clinton in 2016 to Obama in 2008, there’s one word that jumps out:soul. Obama had soul and Clinton didn’t.

Who has your back?

That was a problem for Clinton in 2016 and a continuing problem for Democrats. Voters don’t see much difference between the two Parties. If you ask a typical American, “In the difficult days ahead, which Party has got your back?” They’ll probably answer, “Neither. Politicians are only in it for themselves.”

At the moment, the most popular US politician is Bernie Sanders who is neither a Democrat nor a Republican. He’s a Socialist who runs as an Independent.

But it’s not his Party affiliation that generates Bernie support, it’s his authenticity. Bernie has gained respect by telling it like it is. He recognizes the system is broken and the oligarchs are winning. He’s willing to stand up and tell the unvarnished truth. Bernie has soul.

Not so long ago, Democrats distinguished themselves as “the Party with a soul.” That’s what they need to do now. Democrats need to follow Bernie Sanders.