Why did Fox News start a week ago with their ‘collusion is not a crime’ slant? Maybe Trump’s vicious and unhinged Tweets are meant to keep all eyes on him while hoping for new news to change the narrative. If you can ignore carnival sideshow of Trump’s tantrums there is real news that deserves our attention.

The first is from Vox:

“A tantalizing set of reports from Shane Harris of the Wall Street Journal gives the strongest indication yet that collusion may have occurred — or was at least attempted — between supporters of Donald Trump’s 2016 presidential campaign and Russian hackers who targeted Democrats’ emails.

“And it raises serious questions about whether fired National Security Adviser Michael Flynn was involved in these efforts to contact hackers.”

A long-time GOP operative named Peter Smith put together a team to find the purported 30,000 missing emails from Hillary Clinton’s time as Secretary of State. This was of course a big deal during the election and you likely remember Trump ‘inviting’ (“Russia, if you are listening…”) the Russians to find the emails. With that in mind Smith built a team, reached out to Russians and hoped to find the emails as an election advantage for Trump. Smith is not new to this, his personal history extends back to the 1990s when he mounted a similar effort to tarnish then President Bill Clinton.

Peter Smith died May 14, ten days after the WSJ interview. Smith had reached out to Shane Harris to initiate the interview.

Smith’s team sought Clinton emails from Russian hackers, believing the Russian government was behind the effort. Negotiations took place with a handful of purported sources but none were judged to be real and discussions ended with encouragement to give anything ‘they’ had to WikiLeaks. The emails were never released and it’s now suspected they never existed.

Most importantly, Smith implied a direct connection to Michael Flynn who at the time was a senior adviser to Trump’s campaign.

Smith: I Am Doing This With Mike Flynn

Smith told people he was working with Flynn and that he was in direct communication with Flynn. Recruiting included promises of introductions to Flynn’s son, Mike Flynn Jr.

“…first clear reported connection between the Trump campaign, in the form of Michael Flynn, and the Russian attack with this well described, well sourced effort by American Republican operatives looking to contact the Russians who they knew were attacking the United States to get stuff from them, to get stuff from the Russians on Clinton that could be used here. If Fynn is implicated in that effort that would seem to mean that the Trump campaign is implicated in working with the Russians, attempted to work with the Russians to further their aims of their attack in this county. “

‘The Time I Got Recruited to Collude with the Russians’

Mike Tait was an unnamed source for the Wall Street Journal reporting. After the articles were published he stepped forward to share his story as someone who was recruited to the Smith team because of his cyber security know-how.

In a Friday [6/30] article in Lawfare Tate said, “The goal is to provide a fuller accounting of experiences which were thoroughly bizarre and which I did not fully understand until I read the Journal’s account of the episode yesterday”.

“Although it wasn’t initially clear to me how independent Smith’s operation was from Flynn or the Trump campaign, it was immediately apparent that Smith was both well connected within the top echelons of the campaign and he seemed to know both Lt. Gen. Flynn and his son well. Smith routinely talked about the goings on at the top of the Trump team, offering deep insights into the bizarre world at the top of the Trump campaign. Smith told of Flynn’s deep dislike of DNI [Director of National Intelligence] Clapper, whom Flynn blamed for his dismissal by President Obama. Smith told of Flynn’s moves to position himself to become CIA Director under Trump, but also that Flynn had been persuaded that the Senate confirmation process would be prohibitively difficult. He would instead therefore become National Security Advisor should Trump win the election, Smith said. He also told of a deep sense of angst even among Trump loyalists in the campaign, saying “Trump often just repeats whatever he’s heard from the last person who spoke to him,” and expressing the view that this was especially dangerous when Trump was away.”

“It is no overstatement to say that my conversations with Smith shocked me. Given the amount of media attention given at the time to the likely involvement of the Russian government in the DNC hack, it seemed mind-boggling for the Trump campaign—or for this offshoot of it—to be actively seeking those emails. To me this felt really wrong.”

So does Tait confirm collusion between the Trump campaign and Russians? As he offers in his article, he shares his experience, you decide:

“Then, a few weeks into my interactions with Smith, he sent me a document, ostensibly a cover page for a dossier of opposition research to be compiled by Smith’s group, and which purported to clear up who was involved. The document was entitled “A Demonstrative Pedagogical Summary to be Developed and Released Prior to November 8, 2016,” and dated September 7. It detailed a company Smith and his colleagues had set up as a vehicle to conduct the research: “KLS Research”, set up as a Delaware LLC “to avoid campaign reporting,” and listing four groups who were involved in one way or another.

And what does the Trump White House have to say about these articles?

In a nutshell: Smith didn’t work for the campaign, any actions by Flynn were as a private citizen. Even though he was engaged with the Trump campaign at the time.

Good Advice From Rachel Maddow: Stop Listening To The Noise Coming Out Of The White House, Watch What They Are DOING

Rachel Maddow spends a lot of her air time on Trump-Russia. On 6/28/17 and 6/29/17 she brought attention to this: ‘Republicans already working to discredit Trump Russia probe’. (You can use the title to find the segment on the MSNBC site).

Maddow reminds us of history: 1) Nixon assured us Archibald Cox was the problem; 2) The Bush administration assured us Hans Blix (IAEA head of Iraq inspections) was the problem; 3) Bush et al assured us that former Ambassador and envoy Joseph Wilson was the problem going so far as outing Wilson’s wife Valerie Plame (at the time a CIA operative); 4) Patrick Fitzgerald, Special Counsel leading the subsequent investigation was characterized as a partisan out to wound the Bush administration (the investigation led to the conviction and sentencing of Scooter Libby who was later pardoned by Bush).

Fast forward to Trump and the Trump White House

Acting FBI Director Mike McCabe and the FBI investigation is under attack. Sen. Charles Grassley Chairman of the Senate Judiciary committee and Sen. Lindsey Graham see the FBI as the problem. Former Director James Comey was fired. Former acting Attorney General Sally Yates was fired. Former Attorney General Susan Rice is the problem for ‘unmasking’. And attacks on Special Counsel Robert Mueller and individuals on Mueller’s staff have already started. Deputy Attorney General Rod Rosenstein is said to be vulnerable to pressure and wary of being fired.

Here’s one view of how these disclosures of collusion are affecting Trump and the state of the White House – as the author says, “we can only imagine how things may devolve from here”. 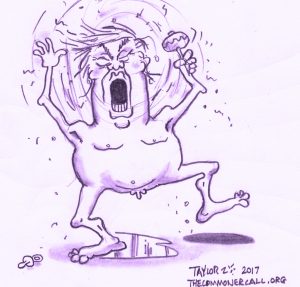 Forgive me the tangent, but I find the parallels between Trump apologists and the defense Martin “Pharma Bro” Shkreli’s lawyers are mounting on his behalf to be worthy of comment. Shkreli is the smug adolescent-faced investor famous for foisting huge drug price hikes upon patients after investing in long-established medications. He is now standing trial for securities and wire fraud.

In opening statements on Wednesday, “Pharma Bro” attorney Benjamin Brafman portrayed his client as an eccentric who was not fit for corporate life.

Shkreli is unfit for corporate life. Trump isn’t presidential. It’s not their fault, it’s just who they are! Whatever Trump does he assures us it’s presidential, because, after all – hey – he is president. And his apologists, lackies and assembled Goldman Sachs eunuchs nod approvingly. 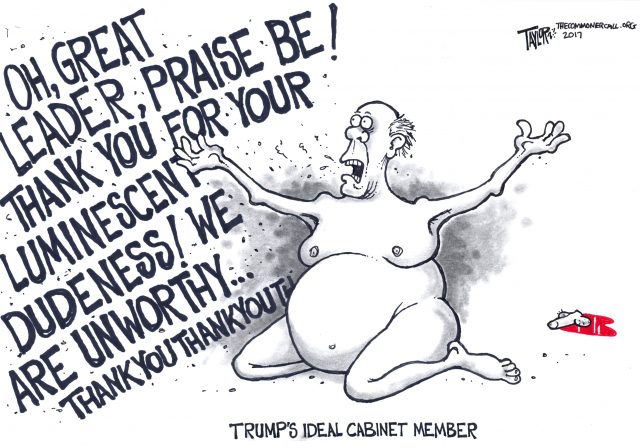 Why Is Trump Doing Nothing? – The Russians Will Be Back

Trump ignores assurances of future Russians attacks from Comey, NSA Director Rogers – a long list. Trump instead works on an initiative to enact national removal of voters from state voter rolls (chaired by VP Pence and Kansas Secretary of State Korbach; ignoring a proven threat to chase after a fake problem).

Validating Russian involvement to help Trump challenges is weak self-image, so don’t look for this to change.

But DO listen to Richard Clarke the former National Coordinator for Security, Infrastructure Protection and Counter-terrorism for the United States, who notes: Russia ‘invaded our country and he doesn’t care’

The video of Clarke’s warning can be found HERE.

The Putin/Trump Meeting This Week – Does Kompromat Lead To US Concessions?

If Trump feels he ‘owes’ the Russians, is that our problem? Do we sheepishly follow along while taking no precautions to protect ourselves in the future because… he’s president, so it must be presidential?

Putin has warned us a few times about our failure to date to appease. 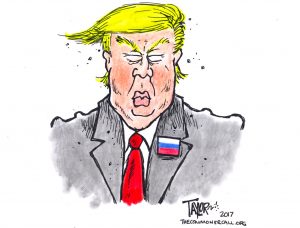