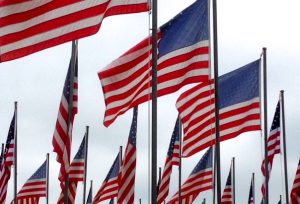 Stand up for what you believe,
Resist the powers that be.
Preserve the land and seas
For the Children of destiny.

Just in time for the Fourth of July Canadian rocker Neil Young has released a surprise patriotic “resistance” anthem and music video, urging listeners to “stand up for what you believe, resist the powers that be.”

The video for “Children of Destiny” (“preserve the land and save the seas for the children of destiny”) intersperses scenes of idyllic American summers with picnics, flags, fighter jets and Fourth of July parades with stunning photos of spacious skies and amber waves — and massive protests and battle scenes.

“Should goodness ever lose/and evil steal the day/Should happy sing the blues/And peaceful face away — What would you do? What would you say? How would you act on that new day?” Young sings.

Young is backed by Promise of the Real, a rock band featuring Willie Nelson’s son Lukas, and a 56-piece orchestra. The music was recorded at Capital Studios in Hollywood.

Young announced the music video on a Facebook post. “We made a record we wanted to share with you,” he said. “We played with a bunch of people … total strangers in the same room on a full moon, 65 of us. It was very great We had a great time. Enjoy.”

Then he launched some “covfefe” with an added message at the end.

Some Thoughts On The Nature Of Real Patriotism…

“I have no country to fight for; my country is the earth, and I am a citizen of the world.” – Eugene V. Debs

“They are patriotic in time of war because it is to their interest to be so, but in time of peace they follow power and the dollar wherever they may lead.” – Henry A. Wallace

“I saw courage both in the Vietnam War and in the struggle to stop it. I learned that patriotism includes protest, not just military service. “ – John F. Kerry

“Heroism on command, senseless violence, and all the loathsome nonsense that goes by the name of patriotism – how passionately I hate them!” – Albert Einstein

“You’re not supposed to be so blind with patriotism that you can’t face reality. Wrong is wrong, no matter who says it.” – Malcolm X

“One of the great attractions of patriotism – it fulfills our worst wishes. In the person of our nation we are able, vicariously, to bully and cheat. Bully and cheat, what’s more, with a feeling that we are profoundly virtuous.” – Aldous Huxley

“Patriotism demands the ability to feel shame as much as to feel pride.” – Anne-Marie Slaughter

“No matter that patriotism is too often the refuge of scoundrels. Dissent, rebellion, and all-around hell-raising remain the true duty of patriots.” – Barbara Ehrenreich

“The greater the state, the more wrong and cruel its patriotism, and the greater is the sum of suffering upon which its power is founded.” – Leo Tolstoy

“The love of one’s country is a splendid thing. But why should love stop at the border?” – Pablo Casals