“The Nazis no longer felt any restraint; with their gangs, they regularly broke up the election meetings of other parties. They shot one or two political opponents every day. In a Berlin suburb they even burned down the house of a Social Democrat family. The new Prussian regional minister (a Nazi: a certain Captain Goring) promulgated an incredible decree It ordered the police to intervene in any brawl on the side of the Nazis, without investigating the rights and wrongs of the matter, furthermore to shoot at the other side without prior warning. A little later an “auxiliary police force” was formed from the ranks of the SA.”

Brawls and verbal confrontations punctuated the latest in a series of far-right “patriot movement” events in Portland, Oregon, on Friday, as around 100 attendees clashed verbally and occasionally physically with “anti-fascist” protesters.

In such an atmosphere of tension and violence, Portland Republicans voted this week to invite heavily armed militia groups to provide security at public events.

The Portland Mercury reported the controversial move, after the text of a party resolution was leaked. In May, the Guardian reported that Multnomah County GOP chairman James Buchal was considering such a move as a result of perceived danger from anti-fascist protesters. Buchal then used a major rightwing rally in the city, on 4 June and in the tense aftermath of a racially motivated double murder on city transportation, as a recruiting platform.

The Mercury reported that Multnomah Republicans had resolved in a meeting on Monday to “utilize volunteers from the Oregon Three Percenters, Oath Keepers, and other security groups” to protect their events. It was previously reported that the party was asking for donations to combat “threats of leftist violence”.

The groups that Republicans are proposing to employ are controversial. Following the Guardian’s initial report, the Anti Defamation League wrote an open letter to Buchal which said groups such as the Oath Keepers and Three Percenters “are not benign ‘security forces’. They are, in our judgment, militia-style, anti-government extremist groups”.

The Friday night rally in Portland remained small-scale and was lightly policed, but nonetheless produced confrontation and tension. An initial rally of around 100 people by a fountain in a riverfront park was confronted by around the same number of “anti-fascist” counter-protesters, who expressed outrage at the presence of at least one fascist skinhead in the crowd.

The rally was followed by a march through the park and local streets, which was trailed and heckled by the same counter-protesters. The two sides intermittently engaged in violent scuffles. … 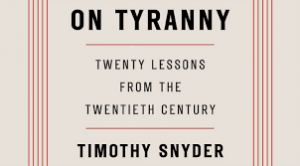 Yale history professor Timothy Snyder is an expert on how authoritarian leaders have successfully dismantled representative governments. In his recently published handbook On Tyranny: Twenty Lessons from the Twentiteh Century, Snyder present 20 key lessons to pay attention to to avoid being sucked into the vortex of authoritarianism. One in particular stands out with the announcement that the republican party in Portland, Oregon voted to have three far right militia groups provide security for their events…

Given the arc of despotism and fascism, watch for more of this to spread across the country.

For a full list of Snyder’s 20 Lessons and an interview with him, link to the Commoner Call archive HERE.