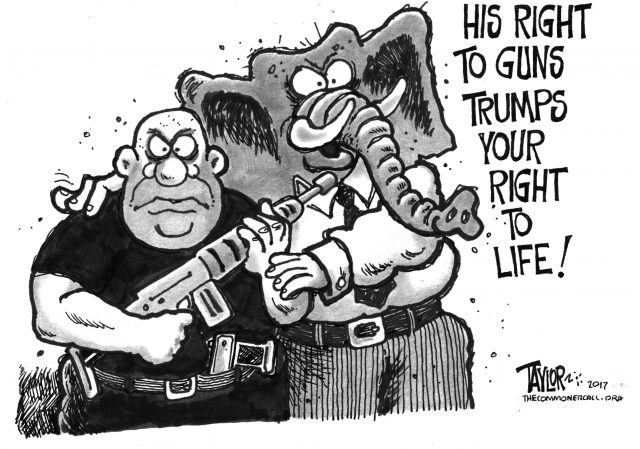 Much will be learned about the Wednesday morning shooting during a republican congressional softball practice in Alexandria, Virginia that left five wounded, including Rep. Steve Scalise (R-La.). Keep in mind much of the news that comes out in the first 24-48 hours after these kinds of all-too-common American events eventually prove to be wrong.

One hopes for the recovery of both body and mind of the shooting victims and those who witnessed the eruption of all-American gun violence. Working in the mental health field with survivors and witnesses of trauma I know that many of the wounds of such events are unseen but long felt.

“Geez, maybe we shoulda’ supported that large capacity magazine ban we defeated.  Of course, I did get a big wad of money from the NRA, so I guess it was worth it.”

The HuffPost reported that at the moment of the shooting the nation had experienced 152 mass shootings in 165 days, bringing the total for the year to 153. Within four hours there was another mass shooting in San Francisco that claimed another four victims bringing the tally as of the time I am writing this at 10:45 p.m. Wednesday evening to 154.

“Gun Violence Archive has verified nearly 7,000 gun deaths so far this year, not including suicides, as well as more than 13,000 injuries. The overwhelming majority of this bloodshed passes without much publicity outside of local news.”

Hey, Republicans, welcome to your America

There are many things that can be said about the insanity and cruelty of the Wednesday morning shooting but one thing I would say to congressional Republicans is: Welcome to the national insanity you have inflicted on the rest of us.

Sen. Jeff Flake (R-Az) was quoted shortly after the shooting that the initial shots were followed by “more than 50 shots fired”, which certainly suggests military grade weaponry and large capacity ammunition magazines. Items republican congressional members in sway to the NRA have long blocked from being kept off the market.

Recently republican congress critters argued to make firearms available to those with mental illness and to make firearms silencers legal – to protect shooter ears, dontcha‘ know … never mind those pesky dead school children who continue to pile up. Scalise has been a staunch and ready defender of NRA causes, including reducing restrictions on the interstate sale of firearms, earning him an A+ rating from the gun group.

Through it all we regularly see innocents gunned down, shot up, bloodied, wounded, crippled, terrorized and, hell, we have even accepted as routine for life in modern America the gunning down of 20 first graders in their classroom. In fact, we think nothing of it. If we did something would have changed.

(And no, you idiots, Sandy Hook was not made up. Stop listening to performance artist Alex Jones).

The Wednesday shooting was described with all the usual threadbare, empty adjectives Americans love to mouth after our weekly massacres. Yes, yes, for godsake, yes, it was “senseless”, “callous”, “tragic”, but the most appropriate adjective that can be applied is: preventable. Yes, it really, truly is possible to prevent high-powered military grade weaponry and ammo from making it onto American streets … homes … schools … and workplaces but it is the Republicans and the crazed loons at the head of the gun manufacturer-funded NRA that has kept all this weaponry in the hands of unstable idiots.

We are the only western industrialized nation where this kind of government and corporate sponsored madness – oh, hell, let’s call it what it really is: domestic terrorism – occurs.

Certainly there’s no way for us to know, and I can bet a Benjamin Franklin that none of those Republican reps or their staff members will ever admit to wondering in the midst of the neighborhood softball field rampage: “Geez, maybe we shoulda’ supported that large capacity magazine ban we defeated.  Of course, I did get a big wad of money from the NRA, so I guess it was worth it.”

Over the next few days we will hear a lot of bullshit about everybody keeping the victims in “our thoughts and prayers” and the empty ritual of candles and teddy bear sidewalk memorials will be observed and then nothing – absolutely nothing – will be done to bring any sanity to the never-ending American gun massacre.

Other than the sun rising, there is precious little I can predict will happen today but there is one thing I know for dead certain that is going on today: the NRA is quietly calling congress critters and dumping more cash in their coffers.

Welcome, Republicans, to the United States of Needless Dark Reality you have imposed upon us and our children.