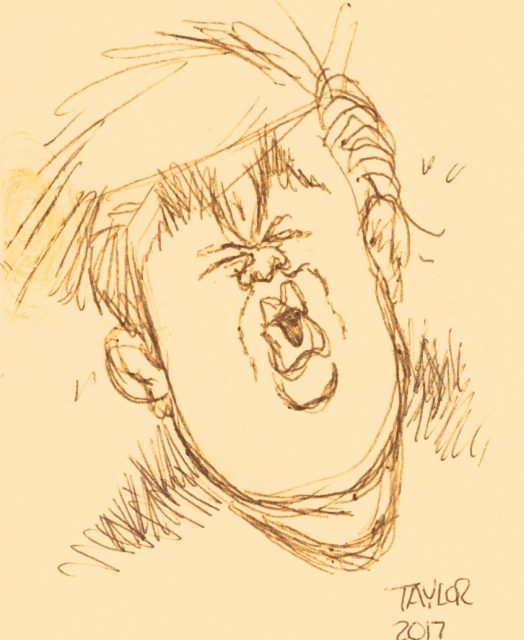 The daily revelations of the entanglement of Trump’s entourage have Republicans squirming and Democrats salivating at the smell of blood in the water. Former boogeymen like the CIA and the FBI have suddenly become heroes to liberals. After years of relative quietude, Russia has emerged once again as the evil empire, as if we were living in the height of the Cold War.

Even progressives have not been immune, with thoughtful In These Times writers like Kate Aronoff and Jeff Alson spending their considerable brain power on weighing the danger, in the case of Alson, and benefit, as Aronoff sees it, of impeachment.

Trump is not the outlier but the spawn of the Republican Party.

While the speculation is entertaining—and great for the bookmakers in Vegas—for progressives and others who take care about the future of the nation and the world, this almost singular focus on Trump and impeachment is both mistaken and dangerous. Like a horrific accident on the highway that commands everyone’s attention, Trump now serves as a dangerous distraction.

Consider this. Some of Trump’s egregious imperial actions, such as the travel ban targeting people from six Muslim-majority countries, have been hindered by large-scale protest. Yet, quietly and without much attention, the Republican Congress has already passed, and Trump has signed into law, pieces of legislation that threaten public health and welfare whatever Trump’s fate.

This Republican assault on our social fabric has already resulted in the following new laws:

And that’s just what’s now become the law of the land.

This year alone, 39 bills that restrict voting rights have been introduced in 22 states, with at least three states having adopted them into law …

Sen. Cory Booker preached patience in the ongoing investigations into Russian election interference and potential ties to the Trump campaign, saying he was not ready yet to entertain talk of impeachment charges.

“I’m not going to rush to impeachment,” Booker (D-N.J.) said Sunday on CNN’s “State of the Union.” “I think we need to deal with this in a very sobered way.”

Democratic lawmakers have largely shied away from discussion of seeking the impeachment of President Donald Trump, whose White House and former transition team have been hit with a wave of recent controversies pertaining to contacts with Russian officials.

The senator said what is needed now is an “objective assessment of facts” and not a “relitigation” of the 2016 presidential election, which was mired in partisan politics. Booker added that he was “satisfied” to see progress being made in probes of Trump-Russia ties within both the federal government and the legislative branch. …