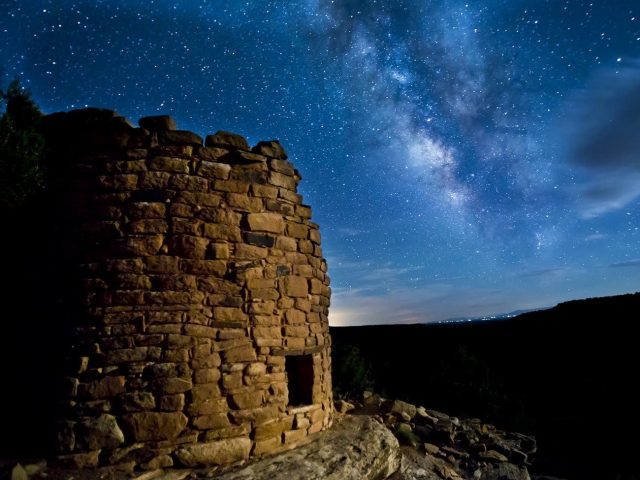 President Trump has ordered the Department of the Interior to review all designations of national monuments greater than 100,000 acres created since 1996.

That executive order, which he signed Wednesday, places at least 20 — and as many as 40 — monuments in the government’s sights. The areas now under review span a vast range of landscapes — from arid deserts to frozen mountain peaks, from striking craggy vistas to teeming underwater playgrounds.

And, though these monuments were all established roughly in the past two decades, they all have a history more than a century long. That’s because all of them owe their existence to the 1906 Antiquities Act, a law signed by President Theodore Roosevelt that makes it a federal crime to destroy or alter ancient artifacts and ruins on federal land.

The act also gives the president the authority to designate national monuments.

More recently, with most large public lands protection bills stalled in Congress, presidents from Bill Clinton to George W. Bush and Barack Obama have used the act as a tool to protect sweeping amounts of federal land mostly in the West.

President Obama’s late hour designation of the Bears Ears National Monument in Utah, for instance, protects more than a million acres — even though the Antiquities Act specifies that monuments designated by a president “in all cases shall be confined to the smallest area compatible.”

It’s this perceived overreach that partly spurred Trump to sign his executive order.

But if, after the review, Trump also decides to bypass Congress and act by executive order to shrink or even nullify any of the monuments, a court challenge is all but guaranteed.

So, what are the landscapes that have drawn Trump’s scrutiny? Click on the links below — or simply scroll down — for a visual introduction to many of the national monuments now under review…

Preserving Our Public Lands In Montana And Beyond

Long before the nation got to know Greg Gianforte as a body-slamming, reporter-punching candidate to Congress, I knew the guy was a jerk. Why? Because he sued his own state, Montana, to remove public access to fishing on a public riverbank near his property. He sued to privatize public lands access rights, and to threaten traditional uses of our public lands.

Sadly, Gianforte and Secretary of the Interior Ryan Zinke, whose Montana seat in Congress he now fills, are among the growing number of Republican lawmakers and industry leaders who feel public lands should be treated as their property, and who feel empowered by President Trump to go out and take what they want. Many Americans will work together to make sure this doesn’t happen. Here’s why.

Public For a Reason

Just this weekend, my wife and two sons and I spent the day hiking and playing in a creek at Capital State Forest just west of Olympia, Washington. The day before, we spent the afternoon soaking in the sun and wading in the Puget Sound at Kopachuck State Park just down the road.

And we’re not alone. Just like us, millions of Americans spend their time together visiting and enjoying public land and waterways. The people we met this weekend tell the story: hikers, bird-watchers, bicyclers, paddlers, hunters, anglers, rock climbers, geology nerds, horse enthusiasts and more find a way to use and share our common land.

The Americans I talk to are re-inventing the public land argument in their own way. They understand and describe public land, as I do, as “our land, our river, my park.”

For a working-class family like ours, public lands are a place where we can play, recharge and harvest food. All three are essential to us, as we live on a limited budget and make hard choices every day about how we spend our money. Access to public lands offers us opportunities to to hike, swim, fish, and collect shellfish, all of which we rely on for recreation and as a food source.

The public land trust we share was built as citizens organized and led the effort for accessibility and openness of our public land resources. Through broad and often bipartisan efforts, the American public land portfolio is something we should be proud to enjoy and protect.

Through a variety of agencies, we the people own 640 million acres of Federal land. Within the states, we own additional 200 million acres of public land. There are millions more acres available to the public through local governments and nonprofit conservation organizations.

This treasury of public lands is something that requires consistent defense and protection. In the Age of Trump, the forces of privatization, fossil-fuel development, mining and other extractive industries are in control. Already, just a couple of months into his presidency, Trump’s threats to our public land trust include:

Dismantling an Obama-era public input process that would have improved management and local planning related to Bureau of Land Management public lands. Again, using rhetoric about “too much power and control in Washington,” President Trump is taking away local input and a public process.

A review of previous Presidential designations of National Monuments In calling for a review of this critical piece of the federal public land portfolio, President Trump called the creation of national monuments by past presidents “an egregious abuse of power.”

Included in the list is the Bears Ears National Monument in Utah. Sacred to Native Americans and home to thousands of archeological artifacts and dinosaur bones, Republicans have sought to reverse the status of the recently designated monument.

The President’s recently-released budget broadly reveals the new administration’s attitude to public land use. It contained decreases in funding for conservation programs and public lands across the board. It also included substantial, speculative revenue projections based upon additional sales of resources extracted from public lands, such as oil, coal, and minerals.

It’s no surprise that President Trump sees public land as little more than a business opportunity for his billionaire buddies. He has the money to own his own private golf courses, after all. I don’t expect to see him out on the trail at Olympic National Park or Mt. Rainier when my family is out there this summer.

There is a robust and bipartisan collection of groups that feel as strongly as I do about how our public lands are managed, and are unafraid to speak out. These voices share the dual purpose of protecting public lands access and explaining how a thriving outdoor recreation sector creates jobs and provides income for a surprisingly large number of Americans.

Backcountry Hunters and Anglers, for instance, a nonprofit that had supported Zinke’s appointment as Secretary of the Interior, issued this withering assessment of Trump’s budget.

The administration’s budget starves our public lands of critical funding, The cuts they would levy on our natural resource agencies, resource professionals and key programs are unprecedented and far-reaching in scope: Not only would they profoundly diminish our lands and waters, fish and wildlife habitat, and outdoor opportunities; they also would hobble America’s potent outdoors economy – currently $887 billion strong, sustainable and growing.

Yvon Chouinard, CEO of the outdoor firm Patagonia, points to the role of public lands in creating and sustaining jobs.

Despite this opposition, the Trump administration and its allies in Congress seem dead-set on extracting resources from our public lands at any cost.

The Pebble mine, for instance, a proposal that would damage wild salmon resources in Alaska, is being brought back from the dead. A mining proposal in Northern Minnesota is being proposed, just outside the Boundary Waters National Park. Maine Governor Paul LePage, is calling for the Katahdin Woods and Water National Monument be transferred to his state in order to sell off the land.

What’s important to notice is that citizens across our country are fighting back wherever our public land and access to outdoor recreation come under threat. The Americans I talk to are re-inventing the public land argument in their own way. They understand and describe public land, as I do, as “our land, our river, my park.”

By highlighting the linkages between hikers, birdwatchers, bikers and hunters, they make a stronger and more compelling political argument. They have figured out how to break through the Republican mythology of pitting environmentalism against the economy.

Audio: Tallying The Economic Impact Of Our National Monuments

Our National Monuments are under review — why does it matter?

Mojave Trails, Vermilion Cliffs, Katahdin Woods, Bears Eyes. In all, at least ten million acres, sacred to Native Americans or treasured by backpackers. Also coveted by ranchers, loggers, and miners. The land now under federal protection as part of the national monument system. But President Trump is reconsidering. Local officials don’t like the feds controlling their terrain. This hour On Point, a battle over the national monument lands.