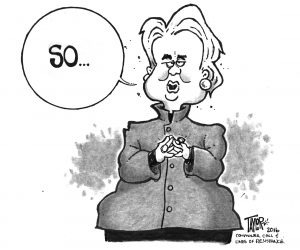 Onward Together, Hillary Clinton’s new political organization, seeks to capitalise upon widespread opposition to the Trump administration. In announcing the group on Monday, Clinton described a vision of a clearing house for coordinating millions of people in protests, fundraising, and campaigning. In other words, it’s the latest attempt to corral mass direct action into avenues that are acceptable to the Democratic party.

But Onward Together threatens to dampen efforts at building solidarity and counter-power nationwide. Partially that’s because of the likelihood the organisation will exert rightward ideological pressure on wayward Democratic candidates. Mainly, though, the threat lies in the fact that it is helmed by a politician who rejects politics.

Clinton, like most prominent Democrats, is committed to a centrist and technocratic vision of leadership. On this view, politics – full of disagreement, confrontation and uncertainty – is something best avoided, or contained through triangulation and tacking to the right.

The Democrats remain the party of centrism and managerialism in American politics. They are not – and will not be – the representatives of popular discontent.

Clinton’s philosophy is not one of making demands and using popular pressure to pursue them. And yet that is the very philosophy that has been vindicated since the election. Earlier this year, mass direct action, aimed at using popular pressure to secure unambiguous demands, produced the first significant victory in the fight against Trump: rapid and massive airport protests made judicial action against Trump’s Islamophobic travel ban all but unavoidable.

Meanwhile, the growth of community defence organising is renewing and strengthening solidarity in cities nationwide. Mass mobilisations such as the Women’s and People’s Climate Marches have made it clear that popular concerns have been unheard and unrepresented by national institutions. Large numbers of people are discovering that building solidarity, mass action, and challenging power are the essential stuff of politics. They are not waiting for the 2018 elections.

The current moment is a rare opportunity for mass struggle. Widespread disgust and outrage at the administration’s policies have played their part in getting people on the streets, but so have the fecklessness and inconsistency with which national Democrats have played the roles of members of an opposition party.

Instead of decrying the manifest injustices of unequal access to healthcare, too many congressional Democrats have joined Republicans in regarding healthcare as a commodity and not a public good. Instead of insisting on the dignity and safety of any and all people inside the country’s borders, too many Democrats have objected to Trump’s call for a border wall on cost grounds. …