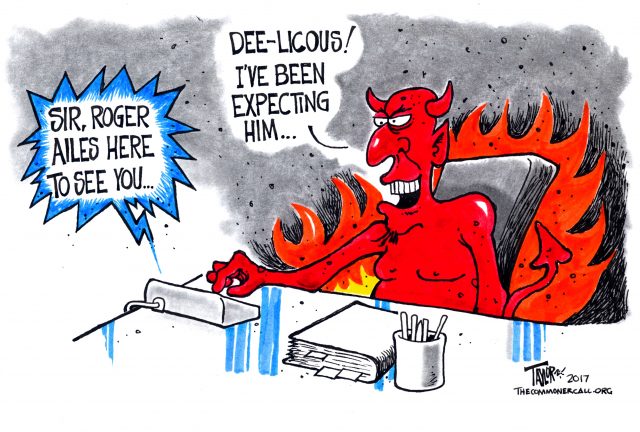 On the Internet today you will find thousands, perhaps even millions, of people gloating about the death of elephantine Fox News founder Roger Ailes. The happy face emojis are getting a workout on Twitter, which is also bursting with biting one-liners.

When I mentioned to one of my relatives that I was writing about the death of Ailes, the response was, “Say that you hope he’s reborn as a woman in Saudi Arabia.”

Ailes has no one but his fast-stiffening self to blame for this treatment. He is on the short list of people most responsible for modern America’s vicious and bloodthirsty character.

We are a hate-filled, paranoid, untrusting, book-dumb and bilious people whose chief source of recreation is slinging insults and threats at each other online, and we’re that way in large part because of the hyper-divisive media environment he discovered.

He never had a soul to sell, so he sold ours. It may take 50 years or a century for us to recover. Even dictators rarely have that kind of impact. Enjoy the next life, you monster.

Ailes was the Christopher Columbus of hate. When the former daytime TV executive and political strategist looked across the American continent, he saw money laying around in giant piles. He knew all that was needed to pick it up was a) the total abandonment of any sense of decency or civic duty in the news business, and b) the factory-like production of news stories that spoke to Americans’ worst fantasies about each other.

Like many con artists, he reflexively targeted the elderly – “I created a TV network for people from 55 to dead,” he told Joan Walsh – where he saw billions could be made mining terrifying storylines about the collapse of the simpler America such viewers remembered, correctly or (more often) incorrectly, from their childhoods.

In this sense, his Fox News broadcasts were just extended versions of the old “ring around the collar” ad – scare stories about contagion. Wisk was pitched as the cure for sweat stains creeping onto your crisp white collar; Fox was sold as the cure for atheists, feminists, terrorists and minorities crawling over your white picket fence.

Ailes launched Fox in 1996 with a confused, often amateurish slate of dumb programs cranked out by cut-rate and often very young staffers. …

Roger Ailes: No One Did More To Debase US Politics

Roger Ailes, the man who pioneered “alternative facts,” is dead. During the first five years of Fox News—which was built almost single-handedly by Ailes’ genius—I was a regular on-air contributor/panelist there. I dealt with his right-wing lieutenants plenty, but only met Ailes once, at a Fox News “Holiday Party.” The invite did not call it a “Christmas Party.” It was one of hundreds examples of hypocrisy at the TV channel that would soon launch the “War on Christmas” hoax.

Fox News was created in Ailes’ image—a channel that preached family values while subjecting women employees to intense harassment and body-shaming.  Before Ailes launched Fox News with Rupert Murdoch’s millions, he was executive producer of Rush Limbaugh’s syndicated TV show—which once displayed a photograph of Chelsea Clinton while Limbaugh referred to her as the “White House dog.” She was 13 years old at the time.

I wrote this in my book Cable News Confidential:

I met Ailes once at a Fox News holiday party. If you knew nothing about him, this short, pudgy, balding fellow might appear cuddly, almost huggable, like a nice old uncle you’d nickname Jolly Roger.

Looks can be deceiving. Ailes was the media consultant for Bush Sr.’s vicious 1988 campaign that linked Democratic candidate Mike Dukakis to black rapist Willie Horton. “The only question,” Ailes remarked, “is whether we depict Willie Horton with a knife in his hand or without it.” Lee Atwater, his partner in the campaign, said that Ailes has “two speeds—attack and destroy.”

So Rupert Murdoch was putting Ailes in charge of a TV network during the reign of Bill Clinton, whom Ailes scorned as “the hippie president.” Given his genius with 30-second TV attack ads, imagine what Ailes could do 24/7.

What Ailes accomplished from 1996 until last year was a political/media revolution. As much as I hate to admit it, I can’t think of a single individual who’s had more impact on our country’s politics over the last 20 years. There would have been no Trump presidency without the decades of disinformation spewed by Fox News (and talk radio allies) to millions of voters—on issues from Christmas to immigrants to abortion, from economics to “socialist” Obama to “liberal media bias.”

I learned from my five years on-air at Fox News that its viewers were a fanatical bunch. Not serious readers or thinkers, but ardent voters. Years before pro-Trump “fake news” hoaxes were shared by millions on the Internet during the 2016 campaign, Ailes had reached his audience of voters with cable TV’s version of fake news. It matters that millions of hardcore activists and voters are operating from a worldview where racial minorities, women, immigrants, foreigners and terrorists have the upper hand against beleaguered white males, the depleted US military and persecuted corporations (I mean, “job creators”).

Perhaps Jon Stewart said it best in 2001 when The Daily Show earned a Peabody Award, given for excellence in television without any specific categories. Jon Stewart accepted the award by joking that he had won in the “News Parody” category: “There was not much competition this year. It was just us and Fox.”

The news was announced by his family; no cause of death has been reported. Citing two sources, New York Magazine national affairs editor Gabriel Sherman writes on Twitter that Ailes fell last week in Palm Beach, Florida, and suffered complications from a blood clot.

Ailes was forced out at Fox last year, amid allegations that he had sexually harassed and retaliated against women at the network for decades. Donald Trump, who was the Republican presidential nominee at the time, came to Ailes’ defense, describing it as “very sad” that multiple victims were “saying these horrible things” about the media mogul.

‘Ailes made the world an uglier, stupider, more brutal place’

Trump was not the only GOP president to enjoy a relationship with Ailes, who also served as adviser to George H.W. Bush, Ronald Reagan, and Richard Nixon. For the latter, CNNreports, Ailes “prepared a 300-page memo titled, ‘A Plan for Putting the GOP on TV News’.”

As the New York Times wrote in a profile published upon Ailes’ 2016 resignation from Fox:

With Fox News, Mr. Ailes introduced a brash, point-of-view-based style that influences much of today’s media. But the closest comparison for him might be less CNN’s Ted Turner than someone like J. Edgar Hoover: a power behind the power, unelected but mighty, outliving administrations and the ebbs and flows of elections, ruling by force and fear.

[…] Ailes also shaped TV news in the way that his TV-bred generation shaped politics. It was a revolution of tone, production style, and manners as much as ideology.

Politics and media of the midcentury, pre-cable era were shaped by norms of tone and content. You respected certain codes of gravitas. You practiced professional dispassion. You might chase ratings, but you recognized an interest in appearing like something other than entertainment. Even CNN, which shook up the broadcast news paradigm, featured stately battleships of dignity like Bernard Shaw.

The idea of Fox News, journalistically and aesthetically, was: screw the norms. What if we just get right up in your face?

Ten women have publicly come forward with their personal accounts, while at least 20 women have privately accused Ailes of some form of workplace harassment, according to Carlson’s legal team. Some of those women spoke out about their experiences using pseudonyms to New York Magazine last July.

The accusations range in time from Ailes’ stint as an executive producer on “The Mike Douglas Show” in the 1960s up to his time as Fox News’ CEO in 2016. Ailes stepped down as CEO in July 2016 and was given a $40 million exit package, which was reportedly twice as much as the payout Carlson received.

The allegations became the story of the summer in 2016, and events transpired quickly. Only 15 days after Carlson filed her initial lawsuit, Ailes stepped down from his position at Fox.

Below, in chronological order, is a list of women who came forward to publicly accuse and hold accountable the late Ailes for his alleged sexual harassment. …

“All his monstrous designs finally caught up with him.”