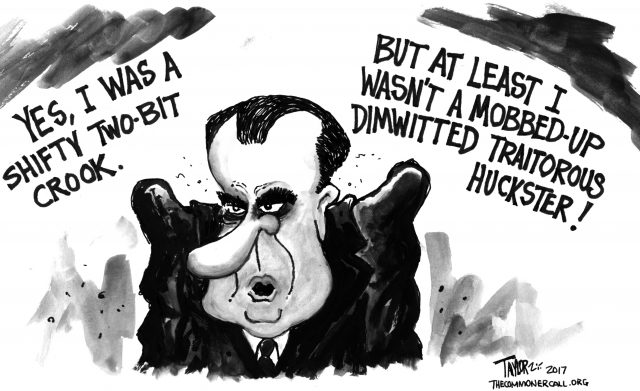 “Our Constitution works.” So declared newly installed President Gerald Ford in 1974 after Richard Nixon’s resignation. “Our great republic is a government of laws and not of men.”

Oh glory be! All’s well that ends well. That has been the conventional wisdom ever since. Nixon was checked by checks and balanced by balances. The republic was saved, proving, in the words not only of Ford but of just about everyone, that the system does indeed work.

Except for one thing: It didn’t. In fact, the real lesson of Watergate is not that the Constitution worked. It is that it failed spectacularly. Contrary to the myth, Nixon’s resignation was anything but the inevitable consequence of a powerful constitutional juggernaut.

Rather, it was the consequence of a bizarre, highly improbable series of events that was more reminiscent of Rube Goldberg than James Madison or Alexander Hamilton (Goldberg being the cartoonist who drew elaborate machines that performed the simplest task by setting off a long, complicated chain reaction). So if you’re thinking (dreaming) that crazy King Donald will be deposed by our vaunted checks and balances, consider first that if the political system really worked, a narcissistic man-child like Trump could have never gotten to the presidency, and second, that the Constitution is a shoddy and inadequate contraption unsuitable for ridding us of narcissistic man-children.

Simply put, don’t count on it.

We got lucky once — very, very lucky. We aren’t likely to be that lucky again.

I don’t know if Trump colluded with the Russians to win the election or if he is conducting a cover-up of his minions’ actions. New York Times columnist Charles Blow wrote that Trump’s machinations either indicate concealment or insanity. I would actually bet on the latter. But even if he is guilty — even if he has a smoking gun in his hand — it would still take Rube Goldberg to oust him. So says Watergate.

Let’s begin at the beginning. It is incontrovertible that President Richard Nixon connived to pay off the Watergate burglars so that they wouldn’t squeal and that he approved of an elaborate system to halt the investigation that could lead from the burglars to his Committee to Re-Elect the President. But to get from there to a possible impeachment and the resignation that obviated the necessity for the impeachment was a long and tortuous road. …

“I’m not giving up because I didn’t do anything wrong,” Baldwin said. “But I can’t speak for any of these people.”

SNL continues with some of the best political commentary to be found yet.

The Impeachment Trap: Be Very, Very Careful What You Wish For

Donald Trump’s abrupt firing of an FBI director who was leading the investigation of the Trump campaign’s possible collusion with Russia has sparked a new flurry of calls for impeachment.

The impulse is understandable. Comey’s firing is just the latest in a litany of outrageous behavior that’s shredding the credibility of the presidency: from the financial conflicts of interest to the pathological lying to the authoritarian attacks on the judicial branch and the press.

Republicans are in a political straitjacket—unless Democrats commit political suicide by falling for the impeachment trap.

But outrage aside, we must keep one thing in mind: how progressives and Democrats approach impeachment could shape our democracy and the domestic political landscape for a generation. We must focus on what is best for the American people, not on what is worst for our so-called president. I believe it would be a major strategic blunder for the Democratic Party to fall for what I call the Impeachment Trap—the powerful temptation to lead the charge for impeachment without considering the strategic implications.

The simple majority necessary to impeach in the House of Representatives, as well as the two-thirds majority that is required to convict in the Senate, can be achieved with the support of most or all Democrats and a minority of Republicans. Unfortunately, this scenario would offer enormous political benefits to the Republicans.

If Trump were impeached and convicted, Vice President Mike Pence, a right-wing, evangelical ideologue, would be a much more reliable and competent rubber stamp for the conservative policy agenda. …

Enabling A Dangerous President: Pence Was There

Donald Trump’s disclosure of highly sensitive intelligence to the Russians and reported efforts to shut down the FBI’s investigation into former national security adviser Mike Flynn now shine a spotlight on the next person in line for the presidency. It should be withering, because Vice President Mike Pence (JD, Indiana — Robert H. McKinney School of Law, ’86) is not a solution to Trump. His consistent dishonesty is a central part of the problem America faces. But compared to the boss, whose dangerous tendencies he has enabled, Pence seems like a Boy Scout. That merely proves the depths to which the bar of acceptable behavior has fallen, if it even exists anymore.

Lies on the Campaign Trail

As an attorney, Mike Pence has a special awareness that a public servant’s lies can undermine democracy. But such knowledge seems secondary to his political ambitions. When Trump was looking for a running mate, Pence faced the serious prospect of losing re-election as governor because of his extreme positions on social issues. For example, in 2015, he signed Indiana’s Religious Freedom Restoration Act, which allowed businesses owners to act on their religious beliefs in refusing service to gay patrons. With Pence’s eroding popular support, the VP spot on the Republican ticket became his political lifeline, and he has repaid Trump handsomely.

In defending Trump, Pence has sacrificed core principles of democracy. …he has dishonored his profession and disserved the country.

Trump’s actions as president make Pence’s lies during the debate even more striking, including these: