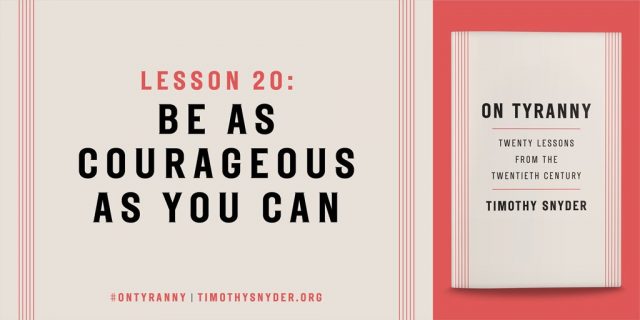 Trevor Noah had historian Timothy Snyder on to “The Daily Show” this week to discuss his book On Tyranny: Twenty Lessons from the Twentieth Century.

Snyder is a Yale professor who specializes in Eastern Europe and the Holocaust. He has spent a lifetime trying to understand how fascism and authoritarianism transform from an idea into a reality. He has written book after book breaking down the patterns and signs to look for.

“What post-truth does is it paves the way for regime change.”

So when Snyder had the stage on “The Daily Show” this week, he capitalized on it by succinctly explaining to the public the steps through which authoritarianism, or fascism, or whatever you want to call it, can become a reality anywhere, even in the U.S. …

Fascism says nothing’s true. Your daily life is not important. The facts that you think you understand are not important. All that matters is the myth ― the myth of one nation as together the myth of the mystical connection with the leader.

So if you want to rip the heart out of a democracy directly, if you want to go right at it and kill it, what you do is you go after facts. And that is what modern authoritarians do.

Step one: You lie yourself, all the time. Step two: You say it’s your opponents and the journalists who lie. Step three: Everyone looks around and says, “What is truth? There is no truth.”

And then, resistance is impossible, and the game is over.