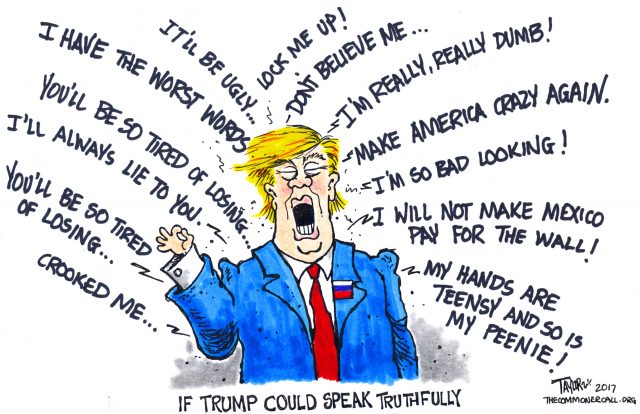 There is nothing Donald Trump loves more than a great superlative. He builds the tallest hotels. He is the most successful businessman. His inaugural crowds were the biggest ever. None of these claims are remotely true, no matter how exaggerated the adjective nor how emphatic the delivery.

But after his alleged blabbing of highly classified intelligence to the Russians, Trump can now lay claim to the greatest superlative of any sitting president: he is the biggest bozo of them all. Bigger than the Bush who thought invading Iraq would be easy. Bigger than the biggest president who got stuck in his bathtub.

Trump is the most unpatriotically reckless, most flamboyantly ignorant, most ludicrously incompetent of them all. Never mind The Apprentice, he’s actually The Biggest Loser.

There are only a few explanations for why the 45th president of the United States would reveal the most sensitive intel about Isis capabilities to one of the least trustworthy countries on the planet. The Washington Post reported that Trump shared classified information to the Russian foreign minister and ambassador about an Isis threat. After all, this intel is so sensitive that we haven’t shared it with our real allies for fear of disclosing vital sources and methods. Even the denials from the White House look pathetically brief. It was the desire to suppress this intel from the official account of the Russian meeting that led to the collective face-palm of the US intelligence community.

“The GOP has gone far beyond the bounds of hypocrisy. It now faces an existential crisis about what kind of values it represents.”

So how could Trump be so stupid? It’s impossible that he was clueless about the classified information he was leaking: he was clearly bragging about having the best intel to his Russian buddies.

It’s also impossible that he thinks it’s fine to leak classified intel. He ran an entire presidential campaign – the greatest ever, he claims to anyone mad enough to listen to him – on the premise that Hillary Clinton should be locked up for mishandling classified intel.

No, even the bozo-in-chief isn’t stupid enough to think it’s OK to hand out information like presidential M&Ms to anyone who walks into the Oval Office.

It seems Trump sees nothing wrong in being so close to the Russians that he spills his guts about our most precious intelligence. He is so desperate to impress them that he cannot distinguish between American interests and his own neediness. America First means Trump First, and if Trump wants to brag about his inaugural crowds or his intel reports, it’s all good. As Richard Nixon liked to say, if the president does it, that means it’s not illegal. …

President Donald Trump is too immature and psychologically damaged to capably serve as chief executive, according to a scathing column by the New York Times‘ David Brooks.

He said Trump had not mastered three essential qualities of mature adulthood — an ability to sit still and focus, an internal measurement of self-worth and a perception of what others might be thinking.

“He is thus the all-time record-holder of the Dunning-Kruger effect, the phenomenon in which the incompetent person is too incompetent to understand his own incompetence,” Brooks wrote. “Trump thought he’d be celebrated for firing James Comey. He thought his press coverage would grow wildly positive once he won the nomination. He is perpetually surprised because reality does not comport with his fantasies.”

Reports that Trump blurted out classified intelligence while boasting to Russian officials are indicative of his carelessness and shallowness, Brooks said.