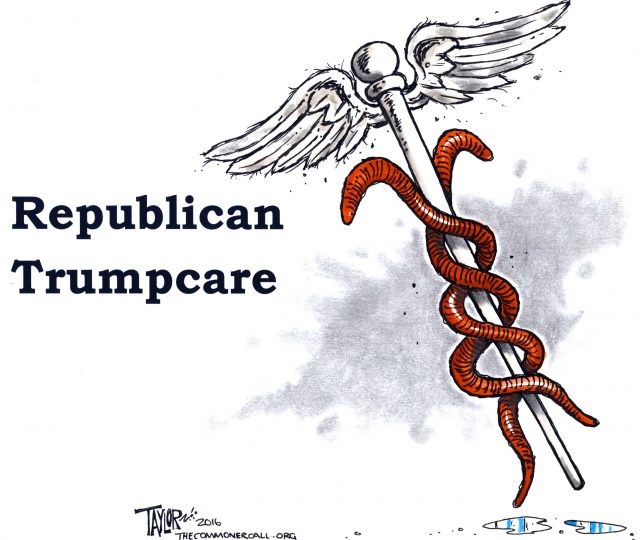 North Carolina Congressman Ted Budd cast an indefensible vote to repeal the Affordable Care Act and replace it with legislation that is so awful that Budd’s fellow Republicans were caught scheming to exempt themselves and their staffs from the measure’s draconian provisions.

But Budd got one thing right. “I’ll take around 2,000 votes this Congress. Most of them will be forgotten,” the Republican congressman said as the vote approached. “This is not one of those votes.”

Good. The vote by 217 House Republicans to gut the Affordable Care Act (while 20 of their colleagues and 193 Democrats opposed the move) must be remembered as the shameful abandonment of health and humanity that it is. This should become the permanent stain on every member of the House who supported it—the issue that does not to go away. House Speaker Paul Ryan and his caucus abandoned any pretense of deliberative or responsible legislating in order to deliver an empty “win” for the flailing administration of President Donald Trump.

“It is not in any way a health care bill. Rather, it is legislation whose aim is to take significant funding allocated by Congress for health care for very low income people and use that money for tax cuts for some of our wealthiest citizens.”

To do this, Ryan’s Republicans voted for a devastating piece of legislation without knowing:

House Republicans simply did not care. The overwhelming majority of them cast their votes as Ryan said they should, and then they ran the gantlet—past crowds of citizens chanting “Shame! Shame! Shame!”—on their way to a White House Rose Garden “celebration” of their partisanship with Donald Trump.

Republicans claimed that they had addressed the fundamental flaws in a bill that had been widely decried for providing less health care to fewer people at greater cost. But that was a convenient lie, told for the sake of media outlets that could not keep up with the twisting and tinkering that was being done to win the votes of so-called “moderate” Republican holdouts. The truth came from the American Medical Association (AMA): “None of the legislative tweaks under consideration changes the serious harm to patients and the healthcare delivery system if AHCA passes. Proposed changes to the bill tinker at the edges without remedying the fundamental failing of the bill—that millions of Americans will lose their health insurance as a direct result of this proposal.”

That’s only part of the problem, explained the group that represents America’s physicians. “Not only would the AHCA eliminate health insurance coverage for millions of Americans,” the AMA added, “the legislation would, in many cases, eliminate the ban against charging those with underlying medical conditions vastly more for their coverage.”

A Wall Street Journal review of assessments of the GOP measure from actual health-care providers was devastating: The American Academy of Family Physicians dismissed the “highly flawed” measure’s attempt to address the crisis it will create for people with pre-existing conditions as “inadequate” and “temporary.” The CEO of America’s Essential Hospitals decried an amendment on funding for high-risk pools as the equivalent of applying “a bandage to a mortally wounded patient.” …

Rep. Chris Collins (R-NY) didn’t read the American Health Care Act (AHCA), legislation to dismantle Obamacare that will result in millions of people losing access to affordable insurance, before House Republicans voted to pass it on Thursday. And he had no idea the bill would cost his state billions of federal dollars used to insure thousands of his constituents.

During a CNN appearance on Thursday, Wolf Blitzer asked Collins if he’d actually read the AHCA before voting for it.

“I will fully admit, Wolf, that I did not,” Collins said. “But I can also assure you my staff did. We have to rely on our staff… I’m very comfortable that we have a solution to the disaster called Obamacare.”

“Congressman, this legislation affects a fifth of the U.S. economy and millions and millions of Americans — don’t you think it was important to actually sit down and read, read the language of this bill?” Blitzer pushed back.

Collins replied by suggesting he was hardly the only Republican who didn’t read the bill, which was rushed through before the nonpartisan Congressional Budget Office could score it to detail its specific impact.

“You know, I have to rely on my staff, and I could probably tell you that I read every word, and I wouldn’t be telling you the truth, nor would any other member,” he said. “We rely on our staff, and we rely on our committees, and I’m comfortable that I understand this bill in its entirety, Wolf, without poring through every word.”

But not reading bills can have serious consequences. Later on Thursday, Collins admitted that he didn’t know the AHCA will cost New York $3 billion in federal funds — money that’s used to insure 19,000 of his constituents.

From The Buffalo News:

Told by a Buffalo News reporter that the state’s largest loss of federal funds under the bill would be $3 billion annually that goes to the state’s Essential Health Plan, Collins said: “Explain that to me.”

The Essential Plan is an optional program under Obamacare, offered only by New York and Minnesota, that provides low-cost health insurance to low- and middle-income people who don’t qualify for Medicaid. State Health Department figures show that more than 19,000 people in Erie and Niagara counties were on the Essential Plan in January.

Asked by The Buffalo News if he was aware of the bill’s cut in funding to the Essential Plan, Collins said: “No. But it doesn’t surprise me for you to tell me that there were two states in the nation that were taking advantage of some other waiver program and New York was one of the two states.” …

Bernie Sums Up Republican Trumpcare Obscenity In One Succinct Tweet…

“Donald Trump and Republicans just celebrated voting to let thousands of Americans die so that billionaires get tax breaks. Think about that.”