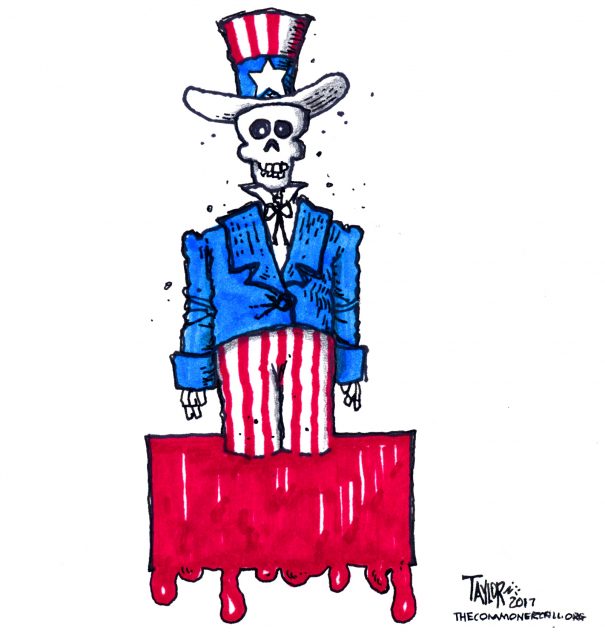 By Dennis Brault
The Commoner Call

America’s blood lust is boiling. If Trump keeps dropping big bombs and holding press conferences showing his tough authoritarian side, his favorability ratings will top 50% within the next few weeks. Ask yourself if their propaganda is working? Do you believe Assad gassed innocent civilians? If you do, based on what evidence? Do you believe that Trump now loves NATO and dislikes Putin? Again, based on what evidence?

“War isn’t about ideology, it’s not about religion. It’s about money. It’s always been about money. It’s about money and power and it is devastatingly sad to see the human race feeling compelled to march further down the road towards ultimate destruction. The holy grail is love. That is what we should be promoting and protecting with every ounce of energy we all have.” — Roger Waters

Our American Empire profits handsomely from war, or we wouldn’t be fighting in so many now and over the last several decades. Forget not what A. Philip Randolph said: “Make wars unprofitable and you make them impossible.” How about a massive War Tax on the masters of war?
How does this make you feel? Rob Cotton writes for The Inquisitor: “Donald Trump’s military strategy is deadly. According to Airwars, an organization that tracks deaths due to air strikes in Iraq and Syria, more civilians were reported killed during the first three months of 2017, a total of 2,826, than were killed in all of 2016. This includes a strike in Mosul in March that left 200 civilians dead, according to the Daily Beast. A strike in Yemen in January not tracked by the Airwars killed 30 civilians, including an 8-year-old girl who was a citizen of the United States.”
I feel sick. Please make it stop.
Chris Hedges recently wrote about our empire’s middle east wars: “This slaughter has already lasted nearly 16 years. It will not cease until the United States is exhausted and withdraws its forces from the region. And before that happens, many, many more innocents will die. So save your tears. We are morally no different from the jihadists or the Syrians we fight. They reflect back to us our own repugnant visage. If we wanted this to stop, we could make it happen.”
So why don’t we stop this slaughter? Is it because we haven’t figured out that democracy is not a spectator sport, that democracy requires everyone’s participation to work. In this age of Trump and GOP tyranny we can be apathetic and silent no more. “The tyranny of a prince in an oligarchy is not so dangerous to public welfare as the apathy of a citizen in a democracy.” —Charles de Secondat, baron de Montesquieu
Don’t let your silence be your consent.
(Commoner Call cartoon by Mark L. Taylor, 2017. Open source and free to use with link to www.thecommonercall.org )