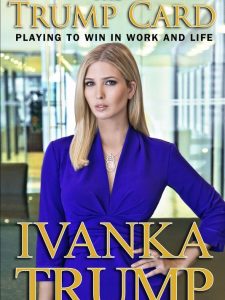 “The apple does not fall far from the orange.”

John Oliver and his Last Week Tonight team broke through the mainstream fantasy that America – and the world – can depend upon Ivanka and her husband Jared Kushner to provide any kind of moderating, reasonable influence on Donald Trump’s impulsivity or casual cruelty.

As Oliver noted, if knowing these two children of unearned wealth, privilege and  power have helped you sleep at night you better stay awake.

Oliver includes a montage of TV talking heads talking sagely about the graceful, moderating influence Ivanka has on her father, assuring us all that she will be our voice at the table; that we are dealing with a reasonable person who can be trusted to do the right thing. Then Oliver hits us with the following quote from Ivanka’s 2009 book The Trump Card:

Um, yeah, “don’t go out of your way to correct a false assumption if it plays to your advantage”. Well, guess what, all those calming assurances and promises from the experts on TV yack shows that things aren’t as bad as they appear because Ivanka is at her daddy’s elbow to keep him from wandering too far off into Crazy Land are delusions. Like father, like daughter, “Perception is more important than reality” and wishfully projecting some sanity and hope onto someone who has already told you she will not go our of her way to correct a mis-perception is not something any one individual, much less an entire nation, can depend upon.

At the same time, Oliver unmasks the incompetent reality that is Jared Kushner, the guy Trump has basically turned responsibility of, oh, EVERYTHING over to. Born to privilege and a $2.5 million ticket to Harvard despite dumpster grades and SAT scores, Jared is the ultimate manifestation of Manhatten real estate bombast, smoke and cloudy mirrors. His purchase of a skyscraper with the appropriate street number of 666 that has been tettering on the edge of insolvency for years is his claim to fame.

It might be reassuring to believe that, really, honestly, it can’t be that bad; that some sane characters are in the room and poised to step in, but that does nobody any good. No, really, it is as bad as it looks and the sooner we all accept that reality and get to work the better chance we have to save ourselves and our nation.

The author of the upcoming book, “Women Who Work” will have to answer for how she treats the women who work for her.

The Washington Post reports that inspectors with the Fair Labor Association found dozens of violations of international labor standards during an audit of a factory in China owned by the G-III Apparel Group — which owns the rights to manufacture and distribute Ivanka’s fashion line.

The newspaper noted the timing of the inspectors’ report, “comes as the president’s daughter has sought to cast herself as both a champion of workplace issues and a defender of her father’s “buy American, hire American” agenda.”

Just yesterday, G-III was busted for rebranding Ivanka’s clothing line and dumping it on the discount retailer Stein Mart.

Activists have also been using the hashtag, #GrabYourWallet to organize a nationwide boycott of Trump family products. The power of such consumer activism was recently demonstrated when Fox News fired host Bill O’Reilly after consumer pressure resulted in dozens of companies halting advertising on the O’Reilly Factor. …

The Guide To Becoming Jared Kushner

NEW YORK ― When Charles Kushner was heading to federal prison in 2005 for illegal campaign contributions, tax evasion and witness tampering, his son Jared got some advice from Howard Rubenstein ― the dean of New York damage control ― on how to rehabilitate the Kushner name, Charles would later tell a family friend.

Step one: Buy a New York newspaper. Don’t be too particular, Rubenstein told Jared, according to the family friend’s recounting of their conversation with Charles. Any newspaper will do. Step two: Buy a big Manhattan building. Any building will do. Step three: Marry the daughter of a rich New York family. Anyone will do.

The younger Kushner went on to do just that. He bought the New York Observer in 2006, made a debt-laden $1.8 billion purchase of 666 Fifth Ave. in 2007 and married Ivanka Trump in 2009. (A Kushner Companies spokesman denied the family friend’s account. Rubenstein said: “That’s preposterous. I never said that or anything like that.”)

He keeps his views so hidden that it’s not clear whether he actually has any at all.

Whether or not Kushner was indeed working through a checklist, his actions during those years have served him well. They also laid the groundwork for the meticulous public relations strategy that has made possible Kushner’s current paradoxical role in the press, as a blameless yet uniquely powerful member of the Trump administration.

Long before he could afford the counsel of someone like Rubenstein, Jared’s father had a sense for how to shape perception to his advantage. In the 1990s, Charles Kushner bought a corporate box at New Jersey’s Giants Stadium on the 50-yard line ― right next to the box reserved for the team’s owners, the Tisch family, according to the Kushner family friend. At the time, the Kushner real estate business was still small, and Charles could barely afford the expense. (A Kushner Companies spokesman confirmed that the family had box seats but denies this characterization.) But he found a way, because he recognized that if you can get close enough to powerful and wealthy people, they’ll assume you are one of them. It’s exactly the sort of maneuver Howard Rubenstein would respect.

The New Yorker’s Ken Auletta condensed the highlights of Rubenstein’s client list in a 2007 profile: “George Steinbrenner, Rupert Murdoch, Donald Trump, and Leona Helmsley; the Museum of Modern Art, the Guggenheim, the Metropolitan Opera, the New York Philharmonic, and the Whitney Museum; BMW North America, Mount Sinai Hospital, Time Inc., Bloomberg L.P., and the notorious Lizzie Grubman. He has advised the last six mayors and the last four governors.” It’s a remarkable lineup, a who’s who of rich, powerful, nefarious, or just intermittently infamous New Yorkers. Martin Dunn, the former editor-in-chief of the New York Daily News, told Auletta that Rubenstein is “much more of a power broker than a public-relations man.”

The Kushners have always had a fleet of PR people working behind the scenes to fluff their image. Rubenstein and his son and protege Steven, who now runs the family business, worked for the Kushners until around late 2011. The Kushners then took their PR business to Matthew Hiltzik, a former aide to Hillary Clinton during her first Senate campaign who went on to work for Bob and Harvey Weinstein at Miramax Films, as well as Glenn Beck, Justin Bieber and Alec Baldwin. It was during his time as a Hiltzik client that Jared Kushner met Josh Raffel, one of the firm’s employees and the man Kushner recently tapped to lead communications for his government-wide innovation project. The White House declined to comment for this story.

In late 2014, Kushner stopped working with Hiltzik and began working with Roxanne Donovan, a PR maven the Observer once described as a “younger, sexier Howard Rubenstein.” Kushner also hired Harriet Weintraub, who has a specialty PR company for real estate and luxury brands, before hiring Risa Heller, a former press aide to notoriously media-savvy Sen. Chuck Schumer (D-N.Y.), in November 2015. …