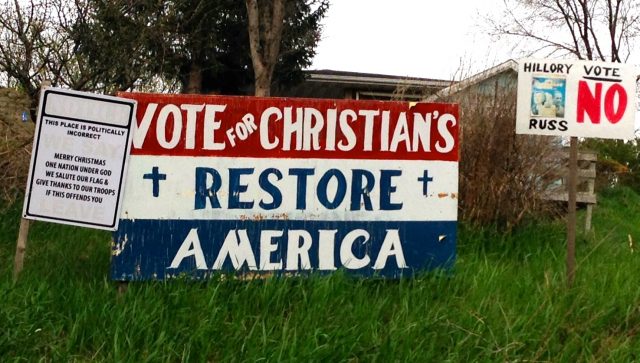 First thing in the morning on April 5, before a meeting chaired by Representative John Shimkus and another with the Solar Energy Industry Association, Energy Secretary Rick Perry headed to the Department of Health and Human Services, according to a copy of Perry’s schedule obtained by Fusion. There, Perry was scheduled to meet for an hour-long “Cabinet Member Bible Study.” The schedule does not list who attended that session, but Ralph Drollinger, a right-wing pastor with a long history of ties to Perry and other Trump Administration officials, claims on his web site to be running weekly Bible sessions specially for the Trump Cabinet. He has praised the new administration for its power to “change the course of America in ways that are biblical.”

A former college basketball star turned evangelical Christian whose own church disavowed him over his bigotry and radical theology, Drollinger has variously proclaimed that Catholicism is “the world’s largest false religion,” that female legislators who continue working after having children are sinners, and that homosexuality is an “abomination.” He has also written that social welfare programs are un-Christian. “It is safe to say that God is a Capitalist,” Drollinger once wrote, “not a Communist.” In a January radio interview, Drollinger praised then-senator Jeff Sessions, who “hungers and thirsts for the Scripture,” for his performance during his confirmation hearing, when he provided a Biblical justification for his draconian views on immigration. “I’ve had the distinct honor of teaching him on this subject, and many others,” Drollinger said. “There’s nothing more exciting, when you’re a Bible teacher, to see one of the guys you’re working with—to see him or her articulate something you’ve taught them when they’re under the gun.”

The Cabinet Bible study is the just newest piece of what Drollinger has described as a “para-church ministry” with a “target audience” of political members. In a September 2015 interview, Drollinger described his mission as creating a “factory” to mass-produce politicians like Michele Bachmann, who is on the Capitol Ministries board. “She thinks Biblically,” Drollinger said. “She doesn’t need a whole lot of time to figure out how to vote because she sees the world through a scriptural lens. We need more men and women like her in office.”

He established a presence on Capitol Hill back in 2010, when Drollinger and his wife, Danielle, began holding weekly sessions for members of Congress. For an outside group to hold an event in a Congressional building, they must be sponsored by a senator or representative; dozens of Members of Congress sponsored Drollinger’s group, including Mike Pence, Mike Pompeo, Tom Price, and Sessions while they were all still on Capitol Hill. Rep. Mike Conaway, who recently took over the House Intelligence Committee’s investigation of Russian interference in the 2016 election from Devin Nunes, is also a Capitol Ministries sponsor.

Now, Capitol Ministries holds three separate Bible Studies each week which it describes in its literature: one for Cabinet members (“7:00 am Wednesdays Mornings. Location Undisclosed. Light Refreshments Served.”); one for the Senate (“8:00 am Tuesdays, Rotating Offices of Senators. Hot Breakfast Served.”); and one for members of the House (“Capitol H324: Monday or Tuesday Evenings after First Votes Back. Dinner Served.”) In an interview in January, Drollinger described the House study as feeling like a truck stop and the Senate study feeling like a country club.

Multiple documents posted on the Capitol Ministries website, including blog posts, essays, and pamphlets outlining the agenda for several recent study sessions provide some idea of the worldview being communicated and reinforced in these Cabinet Bible-study sessions. Drollinger’s recent book, Rebuilding America: The Biblical Blueprint, purports to answer the question, “What is the biblical prescription to Making America Great Again?” Financial records are instructive as well: Capitol Ministries received $276,800 in funding between 2013 and 2015 from the National Christian Foundation, which distributes, at its anonymous contributors’ direction, hundreds of millions of dollars in grants to religious organizations (especially anti-LGBT rights groups) around the world.

Drollinger also argues that climate change is impossible because God promised after The Flood never to do anything like that again. Drollinger preaches against “radical environmentalism” and that to believe that human activity could have devastating impact on the environment is not just mistaken, but the result of godless pride: “To think that man can alter the earth’s ecosystem—when God remains omniscient, omnipresent and omnipotent in the current affairs of mankind—is to more than subtly espouse an ultra-hubristic, secular worldview relative to the supremacy and importance of man,” Drollinger wrote recently. “It follows that we can all rest assured and wholly rely on God’s aforementioned promises pertaining to His ability and willingness to sustain our world’s ecosystem.” …

NOTE: If you know anything about Capitol Ministries, governmental Bible studies, or Dominionism on Capitol Hill or in the White House, please get in touch.

Alabama Could Create Something Unprecedented In American Legal History: A Church-Run Police Force

There are more than 18,000 police departments in the United States, spread out in a vast jurisdictional patchwork of federal, state, local, and tribal agencies that stretches from Hawaii to Maine. This month, Alabama could add to their ranks something unprecedented in American history: a police department operated by a church.

In February, Briarwood Presbyterian Church asked the state legislature for legal authority to establish one. The Alabama state Senate approved Senate Bill 193, which would grant the church’s wish, earlier this month, and a House committee approved the measure on Wednesday. While it’s still several steps away from becoming law—the full chamber is expected to consider it next week—the legislation already, and predictably, faces opposition for blurring the lines between church and state.

The Alabama megachurch serves about 4,000 congregants between its two campuses outside Birmingham, which include a seminary and a K-12 school. About 2,000 students attend the school, and to protect them and worshippers, church officials say they need a police department of their own.

Briarwood declined multiple requests for an interview to discuss the bill. In an email, a church administrator provided documents laying out the institution’s rationale. Among the reasons it cited were recent, high-profile mass shootings nationwide, including those targeting schools. Other security measures can help reduce the threat, Briarwood acknowledged, but it argued that research showed the “number one line of defense” is a police presence.

The proposed department would hold a broad array of powers typically held by local police forces.

“After the shooting at Sandy Hook and in the wake of similar assaults at churches and schools, Briarwood recognized the need to provide qualified first responders to coordinate with local law enforcement who so heroically and effectively serve their communities,” the church said in a press release in February. State Senator J.T. Waggoner, who drafted SB 193, told local newspapers that the church preferred to form its own police force instead of hiring a private security firm or using off-duty officers.

Church officials’ proposal has drawn strong criticism from groups that oppose the bill on constitutional grounds, including the American Civil Liberties Union chapter in Alabama. Randall Marshall, the organization’s acting executive director, called it an “unparalleled action” by the Alabama legislature.

“Our analysis is that this bill, if enacted and signed by the governor, would clearly violate the Establishment Clause of the First Amendment in vesting what is really a quintessentially government power—the police power—in the hands of a religious entity with essentially no oversight after that,” he told me.

Briarwood has indicated it doesn’t plan on adopting all the features of a law-enforcement system. In the provided documents, the church said it doesn’t plan to run a jail or a dispatch center, and will instead forge agreements with three other jurisdictions to handle those aspects of policing. Both Waggoner and the church have also repeatedly cited a provision in Alabama state law that allows universities and colleges to operate their own police departments. …