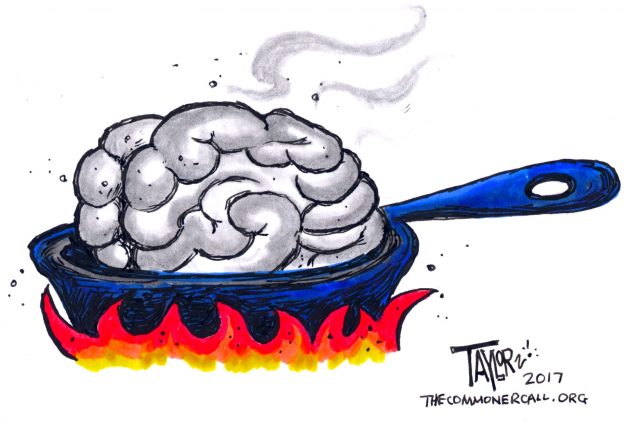 It doesn’t matter how implausible the statements are; throw out enough of them, and people will inevitably absorb some. Eventually, without quite realizing it, our brains just give up trying to figure out what is true.

All presidents lie. Richard Nixon said he was not a crook, yet he orchestrated the most shamelessly crooked act in the modern presidency. Ronald Reagan said he wasn’t aware of the Iran-Contra deal; there’s evidence he was. Bill Clinton said he did not have sex with that woman; he did, or close enough. Lying in politics transcends political party and era. It is, in some ways, an inherent part of the profession of politicking.

But Donald Trump is in a different category. The sheer frequency, spontaneity and seeming irrelevance of his lies have no precedent. Nixon, Reagan and Clinton were protecting their reputations; Trump seems to lie for the pure joy of it. A whopping 70 percent of Trump’s statements that PolitiFact checked during the campaign were false, while only 4 percent were completely true, and 11 percent mostly true. (Compare that to the politician Trump dubbed “crooked,” Hillary Clinton: Just 26 percent of her statements were deemed false.)

Those who have followed Trump’s career say his lying isn’t just a tactic, but an ingrained habit. New York tabloid writers who covered Trump as a mogul on the rise in the 1980s and ’90s found him categorically different from the other self-promoting celebrities in just how often, and pointlessly, he would lie to them. In his own autobiography, Trump used the phrase “truthful hyperbole,” a term coined by his ghostwriter referring to the flagrant truth-stretching that Trump employed, over and over, to help close sales. Trump apparently loved the wording, and went on to adopt it as his own.

On January 20, Trump’s truthful hyperboles will no longer be relegated to the world of dealmaking or campaigning. Donald Trump will become the chief executive of the most powerful nation in the world, the man charged with representing that nation globally—and, most importantly, telling the story of America back to Americans. He has the megaphone of the White House press office, his popular Twitter account and a loyal new right-wing media army that will not just parrot his version of the truth but actively argue against attempts to knock it down with verifiable facts. Unless Trump dramatically transforms himself, Americans are going to start living in a new reality, one in which their leader is a manifestly unreliable source.

What does this mean for the country—and for the Americans on the receiving end of Trump’s constantly twisting version of reality? It’s both a cultural question and a psychological one. For decades, researchers have been wrestling with the nature of falsehood: How does it arise? How does it affect our brains? Can we choose to combat it? The answers aren’t encouraging for those who worry about the national impact of a reign of untruth over the next four, or eight, years. Lies are exhausting to fight, pernicious in their effects and, perhaps worst of all, almost impossible to correct if their content resonates strongly enough with people’s sense of themselves, which Trump’s clearly do.