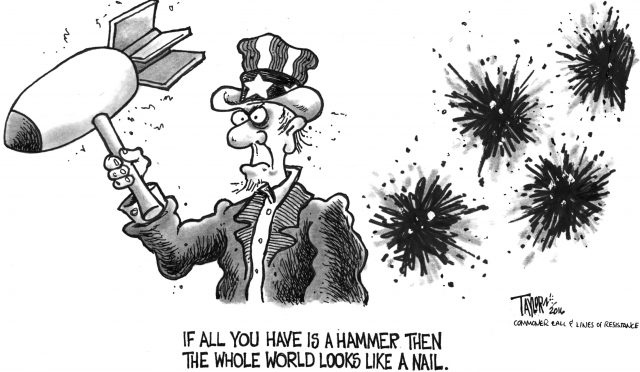 If all the men around President Trump are hammers, the temptation will be to treat everything as if it were a nail.

At over $600 billion a year and counting, the Pentagon already receives significantly more than its fair share of federal funds.  If President Donald Trump has his way, though, that will prove a sum for pikers and misers.  He and his team are now promising that spending on defense and homeland security will increase dramatically in the years to come, even as domestic programs are slashed and entire civilian agencies shuttered.

The new administration is reportedly considering a plan — modeled on proposals from the military-industrial-complex-backed Heritage Foundation — that would cut a staggering $10.5 trillion in federal spending over the next decade. The Departments of Energy, Commerce, Transportation, and State might see their budgets slashed to the bone; the Corporation for Public Broadcasting would be privatized; and (though the money involved would amount to chicken feed) the National Endowments for the Arts and for the Humanities would be eliminated altogether.  In the meantime, the ranks of the Army and Marines would be expanded, a huge naval buildup would be launched, and a new Star Wars-style missile defense system would be developed — all at a combined cost of up to $1 trillion beyond the already munificent current Pentagon plans for that same decade.

The specifics won’t be known until Trump’s first budget becomes public in perhaps April or May, but as we wait for it, Republican Senate Armed Services Committee Chairman John McCain has just taken the unusual step of releasing his own spending blueprint for the military.  It suggests that a key senator and the president and his team are on the same page when it comes to military funding. At an extra $430 billion over the next five years, the numbers in McCain’s plan are similar to the potential Trump buildup.

One thing is already clear: this drastic tilt toward yet more Pentagon spending and away from investment in diplomacy abroad and civilian needs at home will only further militarize American society, accelerate inequality, and distort the country’s already highly questionable foreign policy.  After all, if your military is the only well-funded, well-stocked arm of the government, it’s obvious whom you’re going to turn to in any crisis.

This process was already visibly underway even before Donald Trump took the oath of office.  His gut decision to entrust national security policymaking only to military figures was particularly troubling.  From National Security Adviser Michael Flynn to Secretary of Defense James Mattis to head of the Department of Homeland Security John Kelly, retired generals and other ex-military types now abound in his administration. …

(When you follow the link, scroll down to “What Happens…)

(Commoner Call cartoon by Mark L. Taylor, 2016. Open source and free to use with link to www.thecommonercall.org.)