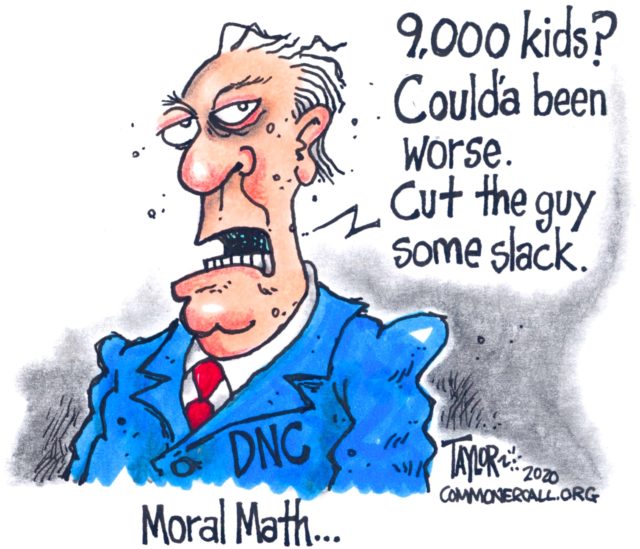 Biden is perfectly comfortable with the moral universe of Rick Snyder, where the mass poisoning of children is perfectly acceptable. As a neoliberal democrat, that is his universe.

It has been clear that the Biden campaign has no use for wooing progressives, believing, as Bill Maher has dismissively said: “Where else are they gonna go?”

The humiliation zoomed into the realm of fantasy satire when former Michigan Gov. Rick Snyder, the man who intentionally and with full knowledge of the consequences, poisoned the 100,000-plus majority Black citizens of Flint, Michigan with lead-tainted drinking water slurped up from the long polluted Flint River.  As the National Resource Defense Council reported: “In Flint, nearly 9,000 children were supplied lead-contaminated water for 18 months.” The actual number undoubtedly is higher. Lead poisoning leads to life-long cognitive and other health problems that can be passed on generation to generation for children exposed to the well-documented and long studied poison.

As noted in Gizmodo: “In an op-ed in USA Today on Thursday endorsing Biden, Snyder noted that “President Trump lacks a moral compass” and “ignores the truth” and “facts and science.” Funny, it seems he and the president actually have those traits in common.”

Support Biden if you wish, progressives, but have no delusions that you will have any influence with such a man.

Now in a rational and moral political party an endorsement from a sadist criminal like Rick Snyder would be shot down within minutes of its announcement, but, no, not in the corporate-controlled Democratic Party of 2020. The Biden campaign promptly issued a celebratory press release touting the endorsement. After all, it’s great to nail down the sizeable predatory sociopath voting bloc. Should work well with the Wall Street bankster voting bloc.

Not only is the Biden embrace of the Republican’s most famous mass poisoner morally abhorrent, it is politically stupid. In 2016 Hillary Clinton lost Michigan by 22,177 votes. After Barack Obama’s despicable embrace, exoneration and blessing of Snyder during his visit to the beleaguered and abused Flint, 2016 turnout among Black voters in Michigan and across the Midwest was down. Now, four years later, as the abused citizens of Flint still suffer with poisoned water and the emerging cognitive and behavioral issues of their poisoned children, the Democrats — the supposed ‘Party of the People’ — have warmly embraced Snyder once again.

Full details of the Snyder assault and ongoing effects are nicely summarized in the Michael Moore Rumble podcast linked below. You can also check out his post Ten Things They Won’t Tell You About The Flint Water Tragedy. But I Will. (Poor Michael Moore — God bless him — but his naivete about the true character of Biden is kind of amusing. Must be the Catholic choir boy upbringing.)

Make no mistake: With the warm embrace of Rick Snyder, Biden — and the entire Democratic Party — is telling the citizens of Flint to ‘F-off’.  Also be clear, any mushroom-enhanced fantasies that progressives will be able to move, nudge, cajole or trick Biden along a more progressive path is delusional.

Progressives, do you really think a candidate who happily endorses — through his embrace of an endorsement — the mass poisoning of a city and its children will ever make any meaningful changes in the direction we need to go for a more humane society? No, Biden is perfectly comfortable with the moral universe of Rick Snyder, where the mass poisoning of children is perfectly acceptable. As a neoliberal democrat, that is his universe.

Support Biden if you wish, progressives, but have no delusions that you will have any influence with such a man. Remember, this is the guy who — in a moment of uncharacteristic candor — schmoozed his Wall Street backers by assuring them that if elected “nothing would fundamentally change”. Including, he has made clear with his buddy-buddy embrace of Snyder, the intentional poisoning of children whenever convenient — or profitable.

Besides, Biden is on the road to losing Michigan and — inevitably with more acts like embracing Snyder — well within striking distance of losing in November.

(Commoner Call cartoon and column by Mark L. Taylor, 2020. Open source and free for non-derivative use with link to www.thecommonercall.org )

“Do you want Hitler or Mussolini?”

Michigan’s former Republican Gov. Rick Snyder is the man most responsible for poisoning Flint’s residents and then covering up and allowing the poisoning to persist. He has permanently damaged peoples lives by exposing them to lead poisoning, ruining their homes due to lead in the pipes.

Link To 1-Hour and 10-Minute Audio

“Do you see how low the Democrats have sunk?”

Maybe it would be better for the former vice president to focus on actual Democrats—who feel like he is doing little to court them.

Since he left office in 2019, former Michigan Gov. Rick Snyder has largely kept a low profile. But on Thursday, the Republican broke his silence to to announce in a USA Today op-ed that he was bucking his party and endorsing Democratic candidate Joe Biden for president.

In the op-ed, Snyder called President Donald Trump a “bully” who “lacks a moral compass” and “ignores the truth.”

“As a proud nerd, I had to deal with bullies over many years; it is tragedy watching our world suffer from one,” Snyder wrote.

The thing about tragedies, though, is that they can be wrought even by nerds like Snyder.

His greatest claim to infamy, of course, is his administration’s handling of the Flint water crisis, which was a direct result of Michigan’s emergency manager law. The people of Michigan rejected a similar law at the ballot in 2012; when that happened, Snyder and the Republican-led Congress just rammed through a new version that couldn’t be rejected by voters. Then, while under emergency management, the city of Flint made the disastrous decision to switch its water supply — which led to its drinking water being poisoned with lead, harming thousands.

Even worse, a bombshell VICE report published earlier this year suggests a coordinated, years-long cover-up of the crisis that goes all the way up to Snyder, who may have known about the crisis much earlier than he testified.

Unsurprisingly, as Snyder’s public profile was soured in the wake of the crisis, he has called for a return to “civility” in political discourse.

But as the statute of limitations for criminal charges in the Flint crisis passed in April, followed by Michigan announcing a massive $600 million settlement for the victims in August, Snyder remained off the hook.

Now, it seems like Democrats are intent on rehabilitating him, the same way George W. Bush became recast as a fine artist who pals around with Hollywood icons at football games.

So how did Michigan Attorney General Dana Nessel, a Democrat whose office was tasked with prosecuting Snyder and his cronies, react to the news of his endorsement of her party’s candidate?

“Now that’s THREE things @onetoughnerd and I can agree upon,” she wrote on Twitter. “It’s only a matter of time before Michigan football wins a national championship. @JoeBiden should be President. Irrespective of our sexual orientation, we both find @briancalley to be ADORABLE. #Biden2020.” …